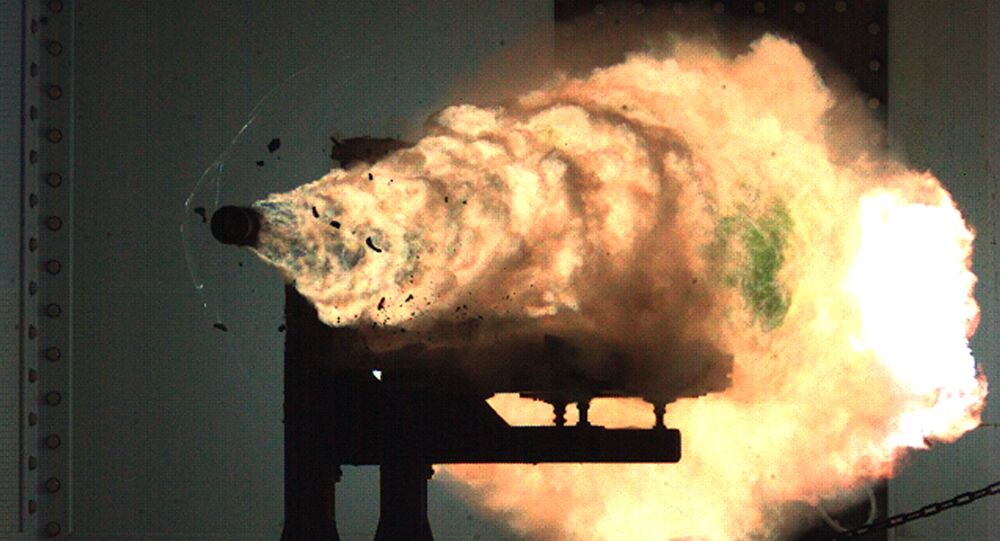 The US military will instead spend $800 million to modify existing weapons that place US Navy personnel at risk while providing only a fraction of the capacity.

The Navy’s futuristic railgun, an electric cannon capable of firing a shell up to 5,600 mph, may never find its way into combat despite an extensive Pentagon publicity campaign for the next-generation weapons system.

Unlike other recent taxpayer-subsidized failures, including the $1 trillion problem-plagued F-35 fighter jet program, potential development of the railgun is not hampered by flawed technology, but is simply not as expensive as traditional US weapons systems, leading military officials to look for higher-cost alternatives to subsidize an already-bloated military-industrial architecture.

The railgun uses a shell of tungsten inside a metal casing that is launched using an electromagnetic field, rather than a traditional explosive charge, a major breakthrough in applied physics. The weapon can strike targets with precision 100 miles away with a force capacity comparable to a missile, but without the use of dangerous gun powder and other materials.

The Pentagon began publicly reducing its focus on the weapon last month, with Deputy Secretary of Defense Robert Work testifying before Congress that "we thought railguns were something we were really going to go after, but it turns out that powder guns firing the same hypervelocity projectiles gets you almost as much as you would get out of the electromagnetic railgun, but it’s something we can do much faster."

Using existing missile technology is more expedient, but is also much more expensive. The Pentagon announced that they will spend an additional $800 million dollars through the secretive Strategic Capabilities Office on modifying existing cannons to shoot railgun munitions, but with much less speed and precision, while creating greater risk to US Navy personnel.

Concurrently, the Pentagon will continue to provide funding to Raytheon to "fix" the already-functional railgun, despite an absence of combat-related defects. The company’s Vice President for Technology, Colin Whelan, has began developing solutions to reduce excess heat and increase energy efficiency.

"We came up with a whole host of solutions, from diamond heat spreaders, for example, to manifolds that have a high density of embedded micro-fins to spread the heat very efficiently away from the small point heat sources and move them through things like graphite and aluminum graphite to the edges of cold rails, so the coolant can be circulated at that point and brought back to a chiller," said Whelan in describing Raytheon’s solution to make it more environmentally friendly by wasting less heat energy.

Another proposal to increase the taxpayer bill for development of a railgun that is not yet as expensive as the US military needs it to be, would be to use 3-D printing technology, again as a method to prevent heat energy loss.

The substandard material quality necessitated by 3-D printing likely will render the weapon inoperable according to defense analysts, as it has already contributed substantially to the failings of America’s $1 trillion non-flying next-generation F-35 fighter jet.