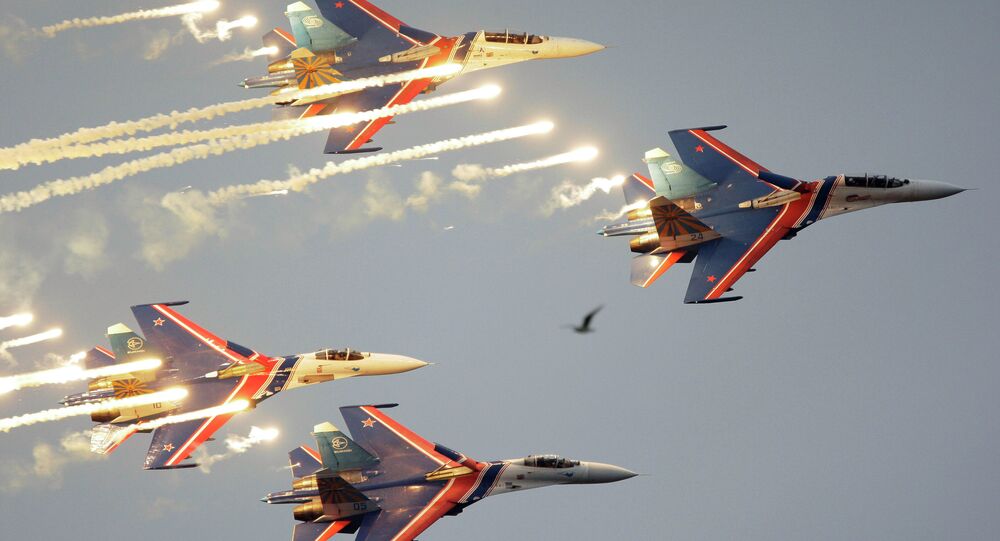 Full Throttle: Why Russian Aerobatic Teams Can Do What Americans Can't

"In this respect we are ahead of the Americans. We fly in mixed formations involving combat aircraft of different types, including the Mikoyan MiG-29s and Sukhoi Su-27s," he said.

© Flickr / SuperJet International
The Sukhoi Superjet 100: Best Plane in Its Class
The type of plane, in his opinion, does not affect how efficient, spectacular or tough a particular maneuver is, but Russian aerobatics teams are still better than their US counterparts. For instance, Russian pilots are the only ones capable of performing the bell, a variation of the tailslide maneuver.

Yet, Rusanov, who served as the Swifts' deputy commander, maintained that military equipment is the only real factor that prevents some from performing the most challenging tricks. "We can perform a lot of maneuvers that Americans cannot due to the technical characteristics of our planes. They wuld love to, but they can't. Their military hardware is the limitation."

Rusanov also added that aerobatics teams employ probably the best pilots in the world. "In any country members of aerobatics teams are top professionals," he said. "No one can simply be invited to join" without the necessary skills.

In the last two weeks, a total of four F/A-18F Super Hornets crashed in the US in three separate incidents, claiming the life of one pilot. Two mishaps, including a lethal one, involved aerobatics teams.

On May 26, two F/A-18F Super Hornet multirole fighters collided off the coast of Cape Hatteras, North Carolina, while on a routine training mission. All four pilots survived the mishap. A week later two US aerobatic teams lost two F/A-18s in separate incidents.

The members of the US Air Force's Thunderbirds survived the crash, while the US Navy's Blue Angels lost a pilot in the June 2 incident that took place in Tennessee.

The worst disaster involving aerobatic teams took place at the Sknyliv airfield located near the Ukrainian city of Lviv in 2002. A Su-27 operated by experienced pilots crashed, killing 77 people and injuring 543 spectators. An investigation into the tragedy ruled that the crew was to blame for the incident.