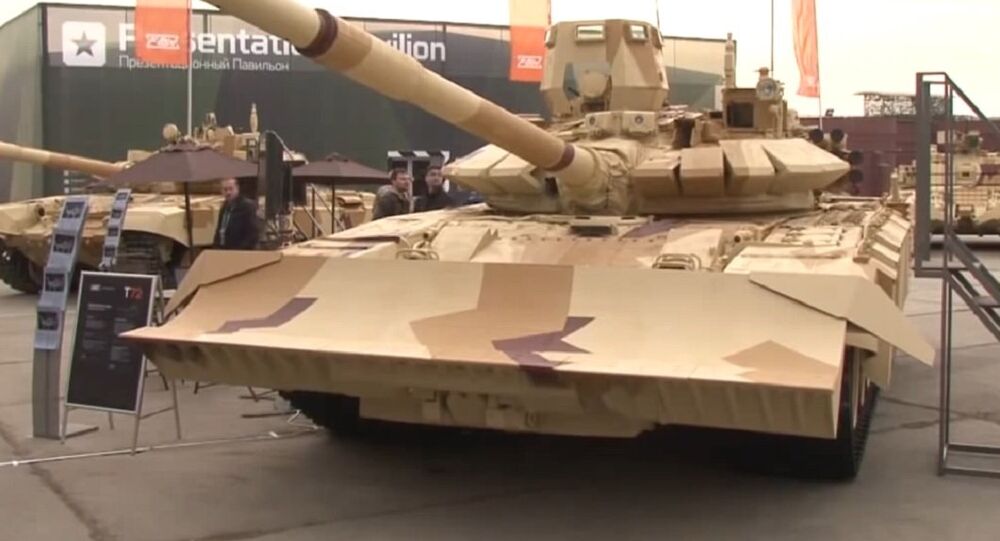 A tank that can effectively conduct combat operations inside a city has been constructed by Russia’s Uralvagonzavod. The tank was constructed taking into consideration conflicts in Syria and the Middle East.

Countries with the most massive armed main battle tanks of the second generation, the T-72, now do not have to worry about what to do with the aging equipment and the transition of military operations to urban areas.

The creators of the tank, the Russian Corporation Uralvagonzavod, have figured out how to modernize the T-72 to effectively combat in urban environments.

© Sputnik / Vladimir Astapkovich
Boom! Things Get Real as Russia's T-14 Armata Tanks Start Battle Tests (VIDEO)
As explained by the Deputy Director for Special Equipment of Uralvagonzavod, Vyacheslav Halitov, the project is based on the experience of the war in Syria.

“If you look closely at the armed conflicts around the world, the war is mainly in the cities now. No one is fighting in open fields anymore. In the city, and even in urban areas, fighting can be quite successful.”

“That's why by analyzing the situation in Syria, wars in Iraq and the Middle East we came to the conclusion to make a special set of additional defenses, which at the right moment can be installed on the vehicle to allow it to fight more effectively in urban environments.”

To give the T-72 a new life, first of all it was important to increase its firepower: to establish a more effective fire gun using the ‘Sosna’ target system with a new regulator and an electromechanical drive.

It was important to use an upgraded 2A46M gun with a modified rocket fire autoloader. The new engine has a 1000HP engine and automatic gear change, just like the modern T-90S tanks.

“We have made this cabin with windows which give it all-round visibility, but most of it is closed, there is a bulletproof mechanism,” the deputy head of Uralvagonzavod said.

© Photo : UralVagonZavod
World of Tank Models: Russian Defense Company Rolls Out Die Cast Combat Vehicles
The modernized T-72 tank is equipped with elements of electronic warfare that can interfere with the ammunition heading in its direction. Halitov also said that the militants are currently using radio-controlled missiles and it is necessary to extinguish their signals over a very wide range, which is particularly important in urban areas.

“We have installed equipment, which suppresses radio-controlled explosive devices. It has two antenna devices behind the tower and an apparatus that can suppress all signals going to the explosive mechanism,” he added.

The upgraded T-72 tank equipped with a fire control system and a thermal imager will be shown for the first time to potential customers June 2 – 5 in Kazakhstan during the IV exhibition, KADEX 2016, in Astana.

As reported in Rosoboronexport, 40 enterprises from Russia’s military-industrial complex will demonstrate around 250 pieces of military equipment during the exhibition.

NATO's War "Games": Do You Hear the Rumble of Tanks? Russia Does!