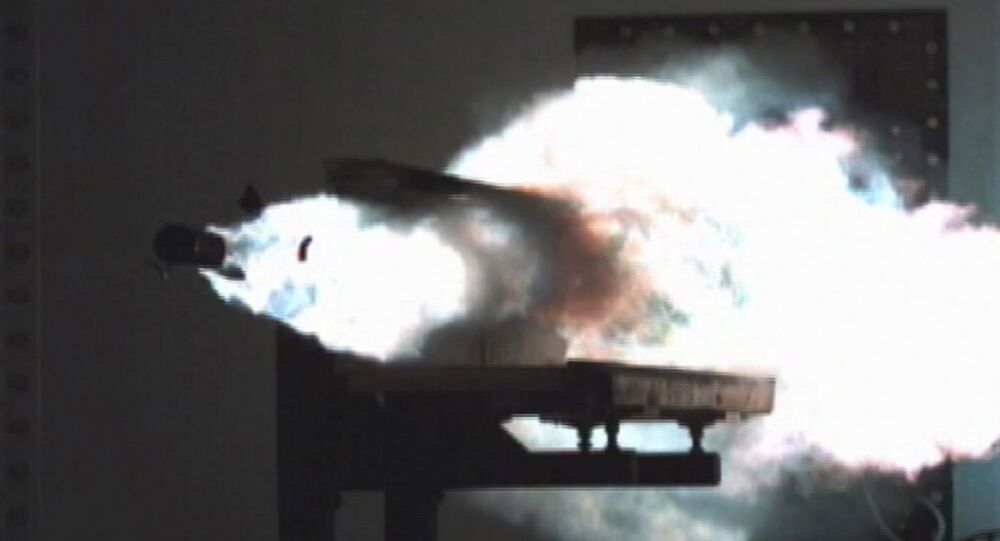 Too Much Power: Pentagon's Supergun Has a Super Weak Spot

The Pentagon appears to be betting the future of the US military on the railgun, but the experimental weapon that some hail as a game changer has weak spots that limit its efficiency – at least for now, experts say.

© Photo : http://www.navy.mil/
'Battlefield Meteorite': Pentagon Hopes Its Supergun Will Help to Counter Russia, China
The railgun is a deadly and potent weapon; there is no doubt about it. "There is no armor that could protect against a projectile" fired from a railgun, defense analyst Konstantin Sivkov observed. "In addition, it could hit a target located far away."

The electromagnetic launcher fires a "bullet" at a maximum velocity of 4,500 miles an hour (more than a mile a second), piercing virtually anything on its path. US defense officials hope that it would be capable of inflicting major damage to any type of weapon, including aircraft and missiles.

The Pentagon's supergun is still in development, but it could enter service sooner than many expect. First sea trials, according to unconfirmed reports, will take place in the summer, possibly on the USS Zumwalt (DDG-1000) guided missile destroyer.

The Zumwalt is the only vessel capable of providing enough electrical energy for the weapon and the railgun needs a lot of power – 25 megawatts. This is its week spot. "Powerful electromagnetic fields will give away the location of the military hardware outfitted with railguns. In addition, you need a large power supply" to use them, Sivkov explained.

The Pentagon will try to adept the new technology to other ships in its arsenal, but this will take time. Meanwhile, the US Navy has not received the lead ship of the Zumwalt-class. The first of three commissioned destroyers is expected to enter service in October.

© CC0 / NNSA / Nevada Site Office / The BADGER explosion
Pentagon-Linked Think Tank Pushes Preemptive Strike on Russia, Robot Missile Defense
The Pentagon is investing into the electromagnetic railguns because the technology offers three major advantages. The weapon does not use gunpowder or any explosive materials. It is also said to have an unlimited magazine depth, with the only constraints being power capacity and cooling.

In addition, it is relatively affordable compared to the DoD's other high-end procurements. Take Lockheed Martin F-35 Lightning II, for instance, that costs approximately $100 million apiece. The USS Zumwalt, for its part, is estimated to have cost up to $4.4 billion.

Russian designers are working on a similar technology, Russian lawmaker Franz Klintsevich told RIA Novosti. Media reports on the latest test of the railgun "did not come as a surprise for us," he said. "Russia is actively developing" its own railgun.

Klintsevich added that the US has not tackled the main challenge with regard to the new technology. In his opinion, it is still too expensive.