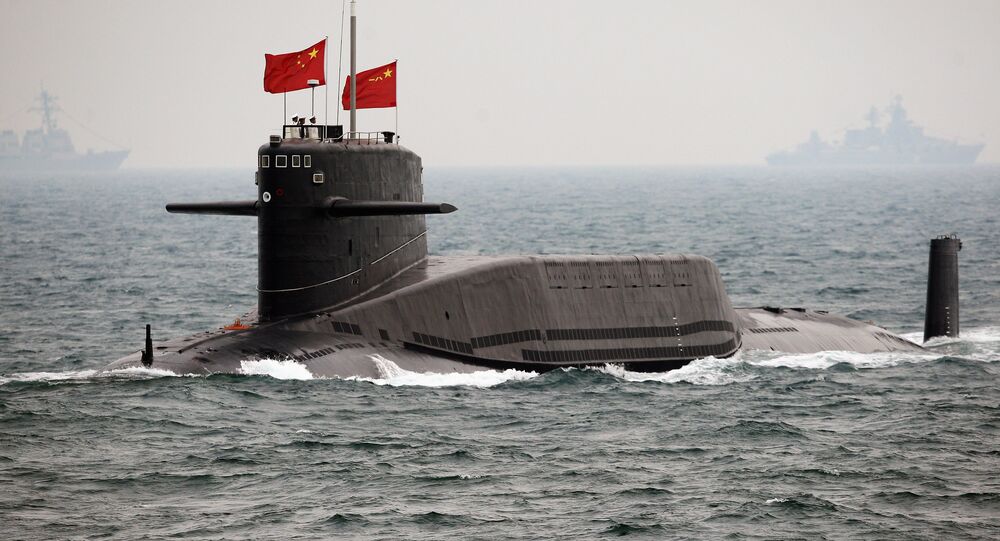 Commenting on growing US-Chinese tensions in the South China Sea region, and Beijing's announcement that it would deploy nuclear-armed subs to the Pacific in response to US missile defenses in South Korea, University of Maryland professor John Short warned that the risks of a military confrontation between the two powers are 'quite high'.

On Thursday, citing Chinese military sources, The Guardian reported that China "is poised to deploy submarines with nuclear missiles into the Pacific Ocean for the first time, [Beijing] arguing that new US weapons systems have so undermined [its] existing deterrent force that it has been left with no alternative."

© AFP 2021 / XINHUA
China's Bases: Why Beijing is Bolstering Its Military Presence Overseas
In March, the US unveiled plans to station its THAAD mobile anti-ballistic missile system in South Korea, supposedly in response to ongoing North Korean missile and nuclear weapons testing. But Beijing has complained that THAAD's range extends across much of China as well, thus undermining its nuclear deterrent.

Speaking to Radio Sputnik about the escalating tensions over THAAD, University of Maryland public policy professor Dr. John Short suggested that Beijing does have reason to be concerned.

"They have some concern – they feel hemmed in; they feel that they are unable to push past the coastal defenses, so they do have some basis [for the nuclear submarine deployment]." At the same time, Short insisted that Beijing also realizes that the US systems are really geared against North Korea. In this regard, "it's a useful debating point for them," he said.

Asked whether Beijing's decision could result in a new arms race, Short said that the possibility definitely exists. "The Chinese have been working for a couple of decades to get their submarine fleet armed with nuclear missiles; they've had some technical problems, but this has been in the works for a while."

© REUTERS / U.S. Department of Defense, Missile Defense Agency/Handout
Deadly Embrace: Washington Surrounding China With Its Missile Defense Network
Ultimately, for the deterrent "to be effective, [the Chinese] need to get their submarines out into the Pacific. And to be effective against US anti-ballistic systems they need the [missiles] to have multiple warheads. That all causes concern in the Pentagon, who sees Chinese submarines in the Pacific with multiple warheads; it's not a scenario that they're happy with. They see it as a threat."

According to the analyst, Beijing's the decision could also open up a number of issues regarding control over nuclear weaponry. In the past, "China has kept very tight control over its nuclear arms; everything has to go through the political system…But once you have nuclear submarines in the middle of the ocean, it's generally up to the naval commanders themselves, so you're essentially pushing the responsibility away from the Politburo toward local commanders; that's a much more dangerous scenario," Short said.

Ultimately, the academic noted that even if China went ahead with deploying its weapons, the balance of power would remain in the US's favor. "The US has major super-carriers; China does not have major aircraft carriers. The number of warheads the US has is 67,000…China only has 260; so there's an asymmetry in their power."

"China's nuclear strategy is really a second strike capability; if they're attacked by other nuclear powers, they want some ability to strike back, even if it's limited. In that sense, the consequences are a sort of new arms race, because the Americans will see nuclear-powered submarines with nuclear missiles and multiple warheads in the Pacific as a direct threat."

© REUTERS / US Navy
'Resurgent Russia' and 'Very Aggressive China' Cramp US Individual Rule in Airspace, Oceans
On a related note, Short warned that the South China Sea dispute between China, the US and Washington's allies is now one of the major threats to global peace. "You have the possibility of all kinds of small-scale escalations building up. You have lots of fishing fleets, lots of commercial traffic moving through a sort of crowded zone. The opportunities for some small flash point to build up to a major conflagration is really quite high."

"It's a major geopolitical hotspot which has been allowed to fester and grow – really it's one of the world's hottest geopolitical areas, similar to India and Pakistan. It really is one of the most dangerous places for world peace I think," the professor said.

Overall, Short indicated, "we have lots of small nations, coast guard, perhaps untrained military personnel right at the forefront – at border lines between fishing fleets and small patrol boats; all these conflicts can really build up very quickly." Ultimately, he noted, "it's developing into a very, very dangerous situation."