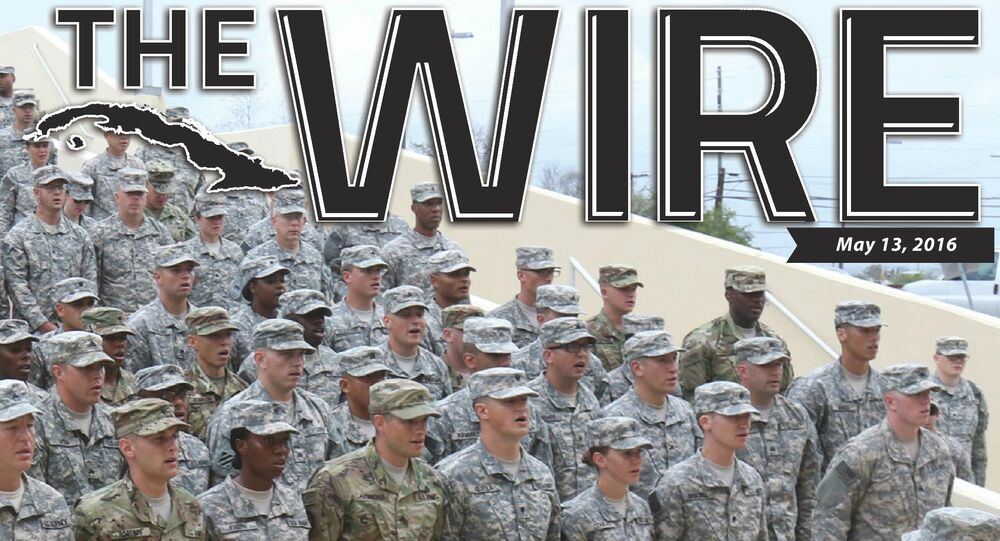 The secretive Guantanamo Bay torture facility celebrates the humanity of guards who destroy the human spirit of the detained.

Joint Task Force Guantanamo, the US armed forces operation overseeing the extrajudicial detention and torture of hundreds of wrongfully-accused individuals from around the world, recently began self-publishing a magazine: 'The Wire,' a weekly read for personnel at the torture site.

The magazine is part of a public relations overhaul focused on humanizing the US torture operation, expounding on ‘transparency’ while engaging in a full-throttle media blackout of hunger strikes, suicide attempts, and the harrowing oppression under which detainees live.

The publication features advice columns such as "Your Words Can Be Used Against You," reminding employees to not "let a simple thing like trash get you in hot water, use operation security and shred all paper!" The column rests next to a piece purportedly written by a former spokesperson for the prison camp, titled "Transparency at JTF GTMO."

'The Wire' features handy personal healthcare tips such as "Health: Don’t Lick Your Phone," reopening a question that has long befuddled humanity: "Would rather lick a toilet bowl or your smartphone?"

The periodical not only attempts to turn the fracturing of the human spirit that occurs at the facility into a kind of confinement theme park, it also exposes Guantanamo personnel, and their families, to security risks by featuring names and faces, all easily traceable through social media.

The weekly magazine, part of SOUTHCOM’s “charm offensive,” seeks to assure that America’s torture facility is all in good fun; the guards are loveable workers in tie-dyed shirts, engaged in intramural softball competitions, or crashing through the Atlantic waves on jet skis.

Troubled by mixed signals between Guantanamo as a prison site and the fun-loving fiesta portrayed by 'The Wire,' Sputnik reached out to Guantanamo Bay’s newly-minted Director of Public Affairs, Army Captain Christopher Scholl, to separate Gitmo fact from fiction. The interview was enlightening, but begged more questions than it answered.

Sputnik asked: Do you worry that ‘The Wire’ compromises the safety of personnel by exposing faces and names?

“We’re always concerned with safety, but we try to balance the operational security with public information,” said Scholl.

Sputnik pressed Scholl to explain why ‘The Wire’ is available publicly online, in light of the risk that extremists could target personnel. His response included the statement that “the reason why it is online is that some of the troopers have internet and would prefer to see it online.”

The prison spokesman stated that, "in the future we may have to pull it offline or to block its contents through a security passcode, but we haven’t reached that juncture yet."

Editorial Policy at 'The Wire' — What Stories are Covered?

Sputnik asked: If there was an incident of torture tomorrow at GITMO, would ‘The Wire’ report on it?

“That wouldn’t happen here, we do not torture,” asserted Scholl. "We also don’t generally talk about detention operations in 'The Wire,' because we just don’t talk about that. If you go through 'The Wire' you won’t see any information about our standard operations."

Sputnik asked: JTF Guantanamo Bay’s Twitter site states you provide "safe, humane, legal and transparent care and custody of detainees" yet the prison is well-known for a lack of accessibility. Can you explain this disconnect?

"It is pretty easy to gain access to GITMO," said Scholl. "During operations it is no different than many other organizations for operational security, if you went to CENTCOM or SOUTHCOM."

Scholl also mentioned that "There is a lot of operational tasks that happen that you keep confidential."

Sputnik asked about the seeming contrast between the site’s transparency claims and the inability to learn what happens on a day-to-day basis at the detention facility.

Captain Scholl countered, saying "We’re very transparent, we have media tours regularly, and we have visits from the international community, including The Red Cross who have been here over 100 times with their own physicians and who talk directly to detainees."

Sputnik asked: Is it credible to say that the treatment of detainees is "safe, humane, and legal," in light of the horrors reported by the international media regarding detainee treatment?

Sputnik buffered the question by pointing out that President Obama went on the record, stating somewhat awkwardly that "we tortured some folks," and that the Pentagon, in conjunction with the Justice Department, continues to fight in court to prevent images considered inflammatory from being released.

Captain Scholl’s response suggested those incidents to be a thing of the past, citing that he has been with the Guantanamo Bay facility for 12 months.

"I couldn’t speak of any of that because I wasn’t here during those years, but I can say that the detainees are treated very well, they have excellent medical care."

Sputnik asked: the JTF GTMO Facebook page includes a comment by someone, presumably a Gitmo guard, citing the need to prevent detainees from committing suicide to get into the headlines. Is suicide an issue?

"I have been here for 12 months and no we haven’t had that problem," said Scholl. "No, there has not been anybody who has attempted suicide in the past 12 months."

Dissecting Fact From Fiction: Is Guantanamo a Bastion of Transparency and Proper Treatment?

Many remember a hunger strike engaged by 106 of the 164 Gitmo detainees in 2013, who were trying desperately to raise awareness of barbaric practices, or end their own suffering through death. What many people don’t realize is that the hunger strike did not end in 2013.

In December of that year, former SOUTHCOM commander Marine Gen. John F. Kelly ordered troops to stop releasing hunger strike figures which, according to a February 10 article by the Miami Herald, still remains in effect to this day.

The Miami Herald article revealed that the hunger strike continued into 2016, despite a blackout on hunger-strike statistics that had once been released daily. Speaking with the facility’s Senior Medical Official, the Herald reporters apprehended that “a handful” of the remaining detainees continue to be subjected to two-hour-long forced tube-feeding sessions twice a day.

There also continues to be a blackout on reporting suicides or suicide attempts, based on firsthand accounts of released detainees, who provide a timeline of individuals attempting to kill themselves at the compound.

The new and improved 'transparent' Guantanamo Bay, and its cheery and helpful news media, claim there is no mistreatment, no torture, no suicides — unsuccessful or not — and no ongoing suffering at the facility, by no longer reporting the incidents, under the cover of "operational security."