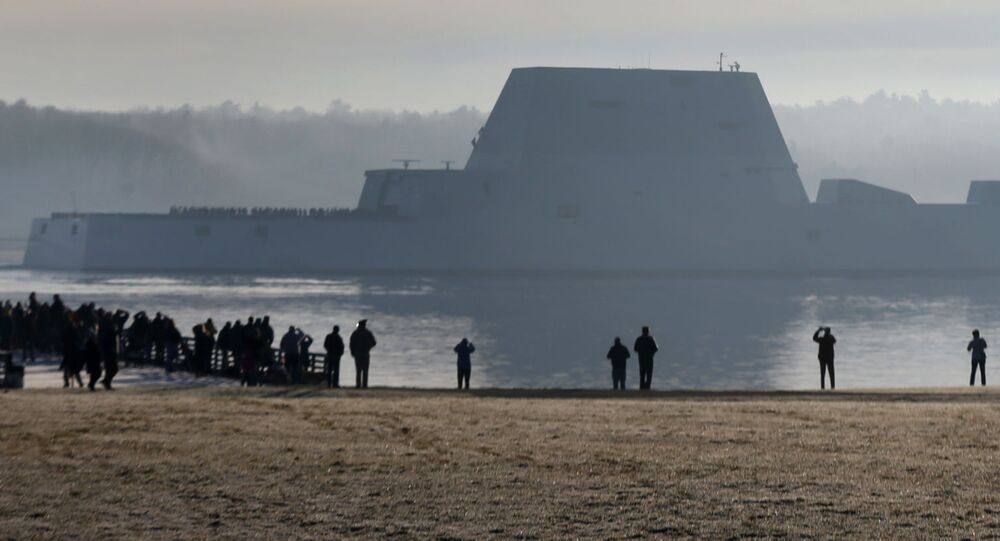 The builders of the USS Zumwalt, the US Navy's new next-generation super-destroyer, have promised that the ship would be nearly invisible to enemy radar. Military analyst Viktor Baranets told Sputnik that this simply isn't the case.

The USS Zumwalt destroyer, set to be officially handed off to the US Navy on Friday at a ceremony in Bath, Maine, has already been touted as the best thing since sliced bread. The ship, set to become the largest and most advanced destroyer in the Navy's fleet, has been described by potential opponents as a dangerous "behemoth nearly undetectable to adversaries until it is too late."

© CC BY-SA 2.0 / Marion Doss / 080723-N-0000X-001
US Navy’s $4.4 Billion Battleship: Gigantic Destroyer is ‘Nearly Invisible’
US media, meanwhile, have already called the $4.4 billion, 610-foot, 14.5 ton destroyer as one of the greatest and most advanced warships in world naval history, fawning over its unique angular design and its radar-absorbing materials.

Apart from artillery and anti-aircraft installations, the Zumwalt is equipped with 20 multipurpose missile launchers capable of launching 80 Tomahawk cruise missiles.

Speaking to Radio Sputnik about this new development in global naval design, retired colonel Viktor Baranets, a prominent Russian military commentator for the Komsomolskaya Pravda newspaper, suggested that the new destroyer's price tag is beyond the scope of reason, and its claims to invisibility ludicrous.

"With an annual defense budget of over $600 billion, the Pentagon can take the liberty of conducting various kinds of experiments, including spending $4.4 billion on a single destroyer. By comparison, one US [Virginia-class] nuclear submarine, the newest in the fleet, costs about $2.2 billion. In other words, they used the budget for two nuclear subs to build one Zumwalt. What can be said? Americans love grandiose projects which sometimes go beyond the scope of reason."

Baranets emphasized that the Zumwalt's stealth technology will not be able to fundamentally weaken large military powers' ability to detect the ship.

"With regard to its stealth, this is just a fairy tale for fools. Imagine a colossus with a solid wall the height of a sixteen-story building. Given the capabilities of current weapons using space and aerial reconnaissance, in addition to those of UAVs, this giant washtub cannot remain an inconspicuous target on the sea surface."

© Flickr / Stuart Rankin
US Stealth Destroyer USS Zumwalt Conducts Sea Trials (VIDEO)
The military analyst also recalled the difference between the Zumwalt and Project 21956, the so-called Leader-class ship conceptualized by Russian designers for the Russian Navy, which is set to go into serial production in 2019.

"2015 saw the appearance of the concept of the Leader-class nuclear-powered destroyer, with all our best designs to be installed onboard. But we are moving forward in this area very carefully, because naval doctrines, in connection with rapid developments in the means of attack and defense, are changing very quickly; in other words, we are in no hurry to move forward with such adventurous projects."

For his part, military analyst Mikhail Lukanin told Radio Sputnik that the ship really was interesting in terms of its innovative solutions, but not in terms of its combat capabilities.

"The Americans have presented the Zumwalt as the best warship in history; this of course is an exaggerated characterization. The ship really is interesting in terms of innovation, when looking at its power plant, the types of weapons installed, and its control system. All this really is a breakthrough. But taken altogether, this does not turn the destroyer into a super-menacing weapon. This is a floating supercomputer with missiles…It doesn't alter the balance of forces."

© Sputnik / Vitaliy Ankov
New Naval Hegemon? What is Behind China's 'Undersea Great Wall' Project
The hefty $4.4 billion price tag is nothing to shake a stick at either, Lukanin said. "Basically, this is the cost of an aircraft carrier, which is much more important from a military point of view. For $4 billion the US could also build three Arleigh Burke-class destroyers, which by the way, are even better armed. If the Zumwalt has 80 missile launchers, the Arleigh Burke has 96."

At the same time, the analyst added, the stealth technology touted by the new ship "has actually become quite common, and is used even on Russian ships with a small displacement. The Zumwalt's price of course, is just off the charts, and it's all very reminiscent of the F-35 fighter jet, which was also heavily advertised before the Pentagon itself admitted that it had started the program in vain."