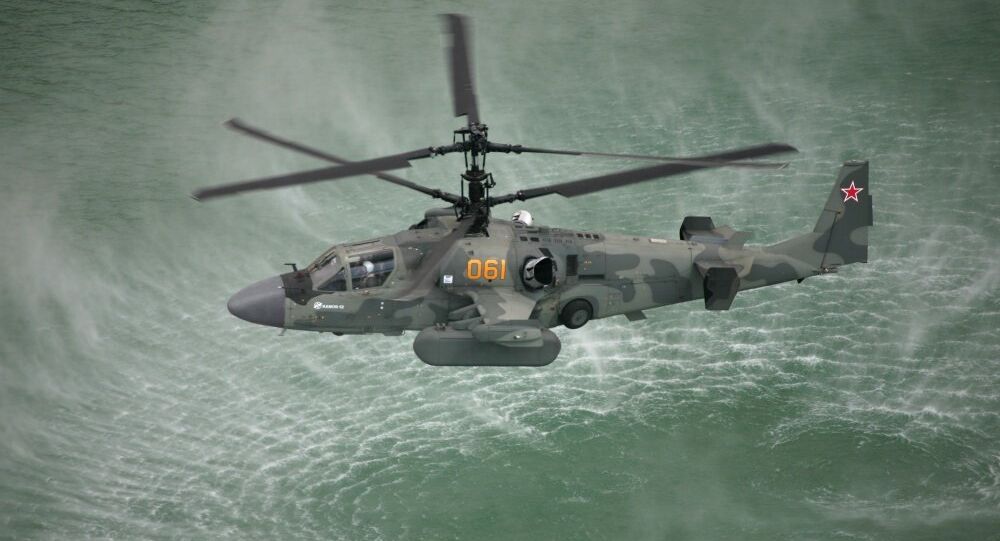 In the framework of its teeming rearmament program, Russia is set to supply its expanding Navy with advanced helicopters. Let's find out what choppers are shouldering their way to the deck.

Reviving the power of its armed forces, Russia is actively beefing up its Navy. The number of its vessels has surpassed 100, and over 50 warships will have been reinforced it by 2018. Modern navies actively use helicopters for reconnaissance, assault and other missions, and Russia is no black sheep in this picture.

Currently Russian vessels use the Ka-27 Helix choppers which have been in service since the 1980s. In general, the trusty beast Helix is still unequalled if the combination of its characteristics is considered, but times are changing, and Moscow seeks a new chopper to meet the requests of its awakening maritime power.

At the moment, Russia has 3+1 options to accomplish this task.

The primary candidate to sail aboard Russian ships is the Ka-52K, the navalized derivative of the Ka-52 scout and attack helicopter with foldable rotor blades.

The Ka-52 has a distinctive coaxial rotor system which enables top-class maneuvering and aerobatics beyond the capabilities of other helicopters. It bears a 30mm automatic cannon, and can carry laser-guided anti-tank missiles, short-range air-to-air missiles and other missiles or bombs. It has proved itself while attacking terrorist targets in Syria.

This helicopter can be further upgraded to fit naval needs.

"The Ka-52 can be equipped with formidable anti-ship weapons, such as the Kh-35 cruise missile and the Kh-31AD [the world's first supersonic anti-ship missile]. With these missiles, an attack helicopter can be turned into an anti-ship chopper," military expert Alexei Leonkov told TV channel Zvezda.

Moreover, the Ka-52K gunship can carry MPT-1 Kolibri (Hummingbird) torpedoes loaded with 45kg of explosives, which will enable the aircraft to scupper submarines.

The second available option is the Ka-31 helicopter which is a deeply modernized version of the tried-and-true Ka-27.

Tested in the 1970s and in service since the 1980s, the Ka-27 is capable of detecting underwater and surface targets, disclosing their whereabouts to ship and shore points or attacking them with airborne weapons.

The third variant stipulates stepping away from the family of helicopters with coaxially mounted contra-rotating rotors. The Ka-60 Kasatka (Killer Whale), whose military modification's first flight is slated for summer, is designed for cargo transportation to combat areas, search and rescue operations, as well as for landing missions and patrol activities.  Its younger brother, the multipurpose Ka-62, has recently made its maiden flight and is primarily designed for cargo transportation, medevac and search and rescue operations.

So basically, if emphasis is put on combat, the Ka-52K is the best choice. If reconnaissance and transportation are important, the Ka-60/62 can be preferred.

Finally, while the three options are at hand, Russia may develop a brand new machine which will embrace the functionalities of all the vehicles listed above and become a universal reconnaissance, assault, search & rescue helicopter.

Earlier this week, Russian Helicopters deputy CEO announced the manufacturer will test-fly its new combat aircraft, whose velocity of over 450kmph will exceed the speeds of operational choppers by over 50 percent, in June. Could it fit the Navy?

The selection of helicopters largely depends on carriers. Moscow could dust off the 11780 assault ship project which envisages 12 Ka-60s or 25 Ka-52Ks, or a mixed scheme involving all three models of helicopters (adding Ka-31s). Such support would be sufficient for 1,000 marines. On the other hand, Russia was reportedly working on its own Mistral-like helicopter carrier after the deal with Paris was scrapped.

To sum it all up, Russia has several options to choose from, and their realization will crucially depend on the goals set before the Navy.