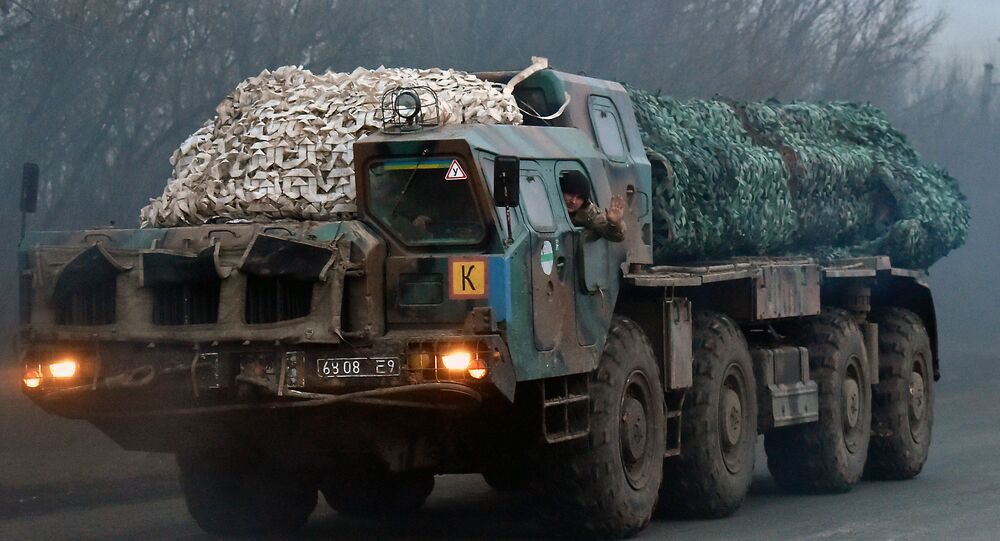 The Ukrainian Defense Ministry reported that it has successfully tested a new tactical ballistic missile. Officials boast that the missile has a range of up to 300 kilometers, and can be armed with various types of warheads, including nuclear. But military experts suggest that the 'new' weapon is actually just an upgrade of an old Soviet design.

© Sputnik / Nikolay Lazarenko
Not Just North Korea! Kiev Reportedly Tests Nuclear-Capable Missile
In turn, meeting with designers and plant managers from Ukraine's defense enterprises, RNBO Secretary Oleksander Turchynov emphasized that the restoration of a missile shield was "one of the priorities for the defense and security of our country."

© AP Photo / Vadim Ghirda
Collapse of Minsk Deal? Donbass Ceasefire Violated 4,700 Times in 24 Hours - OSCE
According to Turchynov, the new missile is not the only such project being developed by the Ukrainian military industry. "We are preparing powerful and effective missiles, which will reliably defend our country," the RNBO secretary emphasized.

© AFP 2021 / GENYA SAVILOV
Here We Go Again…Ukraine's New Parliament Speaker Wants to Cut Ties With Russia
"Of course, Ukraine does not have its own satellite constellation, and therefore the Ukrainian military can only use the data from America's GPS or Russia's GLONASS. The problem, however, is that the civilian versions of both the US and Russia global navigation systems allows for quite significant inaccuracies in the determination of coordinates, while military signals are encrypted, and available only on other [secret] frequencies."

© AP Photo / Pavlo Palamarchuk
Lethal Weapons Deliveries to Aggravate Ukraine Crisis
"The Dnepropetrovsk-based Yuzhnoye Design Office was formerly part of a network involved in the development of intercontinental ballistic missiles. The office developed the Soviet strategic missile system R-36M (NATO classification SS-18 Satan), as well as a number of other medium-range missiles. The Yuzhnoye Design Office has no experience in the creation of short-range missiles."

© Sputnik / Sergey Averin
About 30% of Heavy Weapons Withdrawn From Contact Line in Ukraine Disappear - OSCE Mission
For his part, Center for Analysis of Strategies and Technologies director Ivan Konovalov was more blunt, telling Svobodnaya Pressa that "lately, the Ukrainian defense industry has been repackaging Soviet designs and passing them off as something new."

Russia Calls on Russia-NATO Council to Persuade Kiev Against Violence