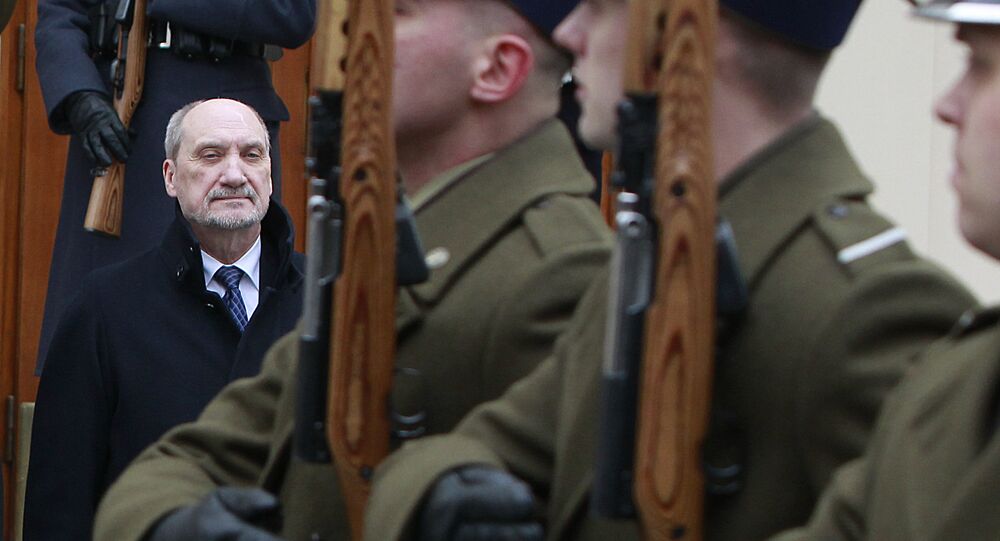 The belligerent rhetoric coming out of the Polish defense ministry is reaching new heights, and may soon be backed up by force, with Defense Minister Antoni Macierewicz announcing that the Polish army has plans to more than double in size in the coming years.

Speaking to journalists at the opening of a new headquarters for NATO Force Integration Unit (NFIU) in Bydgoszcz, central Poland on Wednesday, Macierewicz said that the army would grow by at least 50%, and would include both new territorial defense forces and operating units, Poland's Rzeczpospolita reported.

"The Polish army will be bigger; we envision a substantial increase in the size of the army, by at least 50 percent, in the coming years, including the creation of three brigades for the territorial defense of the country on the eastern flank," the defense minister said.

© AFP 2020 / JANEK SKARZYNSKI
Poland Claims Russia a Greater Threat Than Daesh
"I do not want it to be understood that the development of the army will be limited to territorial defense. This also applies to operating units," he added.

The three new territorial defense brigades will be deployed by the beginning of 2017, Macierewicz clarified.

The reason for the massive planned increase, the minister claimed, was the "threat from Russia, and its occupation of parts of Ukraine."

Saying that he was grateful to allied and US forces in Poland, and "along the entire eastern flank" of NATO, for the important role they play "in ensuring peace and security," Macierewicz emphasized that nonetheless, "the key to achieving this goal is readiness of the armed forces of Poland and other countries of the eastern region to defend themselves," in coordination with NATO and US troops.

© Sputnik / Nikolay Lazarenko
Lithuania-Poland-Ukraine Brigade to Take Part in Anakonda Drills – Ukraine Defense Ministry
The defense minister's announcement follows on statements made earlier to a similar effect. In January, Macierewicz said that Poland's armed forces, which currently number about 95,000 personnel, would grow to 150,000 in the coming years. Moreover, last week, he said that the government has plans to spend nearly $62 billion modernizing its military, a figure close to double the $34 billion the previous government planned to spend through to 2022.

Asked to comment on the defense ministry's plans, Tomasz Jankowski, an expert at the European Center for Geopolitical Analysis, told Sputnik Poland that the expansion will come at the expense of Polish taxpayers, who will be forced to give up more of their tax dollars to buy obsolete US weaponry.

"Everything will be arranged in such a way that we [Poles] will have to dip into our pockets," Jankowski said. "And that's not the worst thing about it. The worst thing (and what the Law and Justice government seems to want) is that all these purchases and modernization plans are devised for Poland to buy mostly obsolete US weaponry, which the US army no longer needs, and is looking to get rid of."

At the same time, the analyst noted, "the defense minister is doubtlessly taking advantage of an atmosphere of constant deception of Polish society, one which suggests that we are threatened with war, presumably against Russia, and that we should supposedly arm ourselves to ensure the country's defense."

Commenting on active negotiations between Berlin and Washington on the deployment of US troops to Poland, Jankowski suggested that this was a "key insight" indicating that Germany and the US, rather than Poland, are the ones making the decisions about the deployment of foreign troops in Poland. "This, in turn, means that Poland is under occupation. And because we are under occupation, there is no doubt that the increase in the army's size is not an independent decision, but rather an attempt to cover the spending of billions for American weapons."

Finally, the analyst noted, "returning to the term 'eastern flank', we need to ask ourselves the question: Whose eastern flank is it? Poland's or NATO's? They say openly that Polish is only the territory on which the military alliance operates, and Poland has no levers of pressure on it…The term 'flank' indirectly recognizes the fact that Poland is only an object of NATO's gamesmanship, and of the US military industry, which needs a market."

© AP Photo / Alik Keplicz
US Military Buildup in Europe Damaging EU-Russia Relations - Envoy
Also last Friday, speaking at a security conference in Bratislava, Polish Foreign Minister Witold Waszczykowski suggested that actually, Russia, and not Daesh, was the real 'existential threat' to Europe. The minister made the comments despite the fact that Daesh has repeatedly attacked European capitals over the last six months, and the fact that Russia has played a key role in rolling back the terrorist group in Syria.

For the record, Defense Minister Macierewicz is well-known for his anti-Russian outbursts. Earlier this year, the minister claimed that the 2010 air catastrophe over Smolensk, which resulted in the death of the Polish president and much of his staff, was actually a 'terrorist attack' by the Russian government, equivalent to Hitler's aggression against Germany in 1939.

Earlier, before his appointment to the defense ministry by the Law and Justice government last year, Macierewicz was already well-known in Poland for his controversial and sometimes racist statements, suggesting for instance that the 'Protocols of the Elders of Zion have some truth' in them, and claiming that Poland and Russia have been in a state of war since the 2010 presidential plane crash.

Poland is pushing to receive additional permanent US and NATO bases in the country ahead of the alliance's upcoming summit in Warsaw in July.

US Government to Develop Airfields in Eastern Europe