The new FS Marjata IV military intelligence collection ship has become a new addition to the Norwegian Navy and will join NATO reconnaissance missions in the Barents and Norwegian Seas this spring, the Swedish newspaper Svenska Dagbladet reported.

© Wikipedia / Anders Lagerås
Red Alert or False Alarm? Sweden Updates Tanks to Fight Russian Submarines
The new FS Marjata IV will be one of the two ships which Norway and NATO will send into the high Arctic seas in an attempt to find lurking Russian submarines which have been terrifying the imagination of Scandinavians for the last couple of years.

The new Marjata IV is the significantly improved and bigger version of its predecessors which have been operated by the Norwegian Intelligence Service since the days of the Cold War. The fourth model of the reconnaissance ship is 126 meters (413 feet) long and 23.5 meters (77 feet) wide. The ship's equipment was developed by experts at the Chatham naval base in the United States. The Marjata project ended up being one of the most expensive ones in the history of the Norwegian military — approximately 149 million euros ($170 million), according to the Swedish newspaper.

Furthermore, in addition to the new Marjata IV, the Norwegian Navy plans to re-equip its older, third-generation Marjata and send it back to keep an eye out for potential Russian submarines. For the first time in history there will be two Marjata ships sent by the Norwegian Navy.

Amid NATO's eastward expansion, Norway, as a loyal member of the Western military alliance, is preoccupied with its mission to make sure that it leaves no stone unturned on the bottom of the Norwegian and Barents Seas, in search of imaginary Russian submarines.

Swedish military analyst Lars Gyllenhaal explained to Svenska Dagbladet that such escalating modernization of the Norwegian Navy shows that Oslo sees Russia as a potential enemy. Norway's decision to increase the number of its reconnaissance vehicles is a classic example that security issues between the two countries have reached a low point.

Norway has been regularly involved in military drills near Russian borders, including Cold Response, Joint Viking, Dynamic Mongoose and others.

Last year, the Norwegian daily Dagsavisen criticized the Norwegian Armed Forces, accusing it of inventing Russophobia and using it to justify its increasing military spending to counter an imaginary Russian threat.

The newspaper said that Norway doesn't need any more weapons, because Russia isn't a threat to Norway. 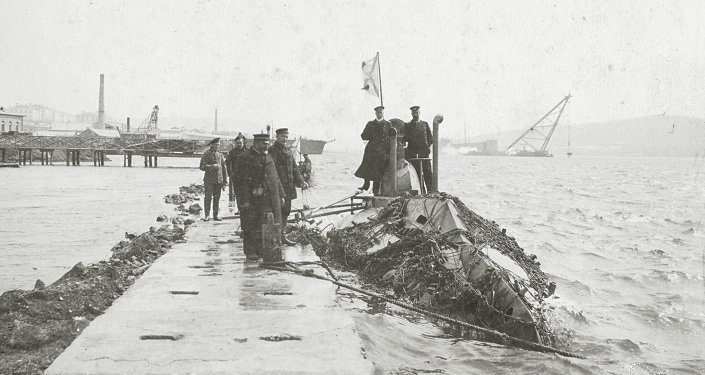 © Photo : tsushima.su
Seek and You Will Find: Sweden's Excruciating Quest to Find Russian Sub
Norway's neighbor Sweden is moving toward the same direction, pouring millions into its military. Just last month, Sweden's defense command announced the country was amending the Military Strategy Doctrine (MSD), under which the Swedish Armed Forces (SAF) deal with threats against the country's sovereignty. The change calls for a more aggressive posture and a transition from the country's post-Cold War-era strategy of containment. The reason for that? Growing Russian "aggression" of course.

Swedish Defense Minister Peter Hultqvist aimed to justify the new, aggressive posture by citing a fear of Russian hostility. "This deeper form of Nordic defense cooperation will provide for a direct response to aggressive Russian behavior."

In the past, Sweden was extremely paranoid about a Russian submarine lurking in the waters near Stockholm, accusing Moscow of sending its underwater vessels to spy on their country. Despite a series of search operations using all kinds of modern equipment, no traces of a Russian submarine in the Swedish waters was found.