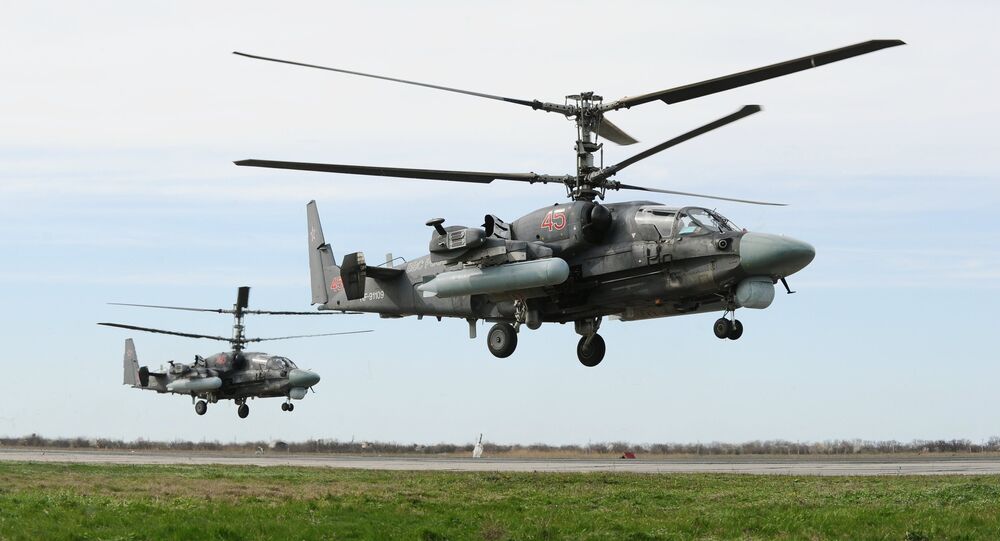 Combat use of Ka-52 Alligator attacks helicopters by the Russian Aerospace Forces was caught on camera for the first time in history.

The Syrian Army published on one of its YouTube channels a video taken near the town of Al-Qaryatayn. On April 3, the Syrian Army and its allies backed by Russian airstrikes fully liberated Al-Qaryatayn from Daesh militants.

© Sputnik / Sergey Pivovarov
Egypt Could Buy Russian Ka-52K Attack Helicopters for Mistral Warships
The Ka-52 Alligator (NATO Designation Hokum-B) is a next-generation reconnaissance and combat helicopter designed to destroy tanks, armored and non-armored ground targets, and enemy troops and helicopters both on the front line and in tactical reserves. It can be used both in reconnaissance and combat missions.

The helicopter can operate around the clock and in all weather conditions. The Ka-52 can provide target acquisition and designation for helicopter teams and ground troop command and control centers. It can also provide fire support for troop landings, fly routine patrols and escort military convoys.
The Ka-52 is equipped with a 30mm automatic cannon, and can also carry laser-guided anti-tank missiles, short-range air-to-air missiles and other missiles or bombs.

The helicopter can travel at a speed of over 180 miles (290 kilometers) per hour and reach an operational ceiling of nearly 3.5 miles (over 5,000 meters).

On March 31, the Russian Defense Ministry published a video showing combat use of Mi-28N attack helicopters. In the video, helicopters fired anti-tank missiles against terrorists’ armored vehicles near Palmyra.

Russian MiG-31 Interceptor Jet to Stay in Service Until 2028