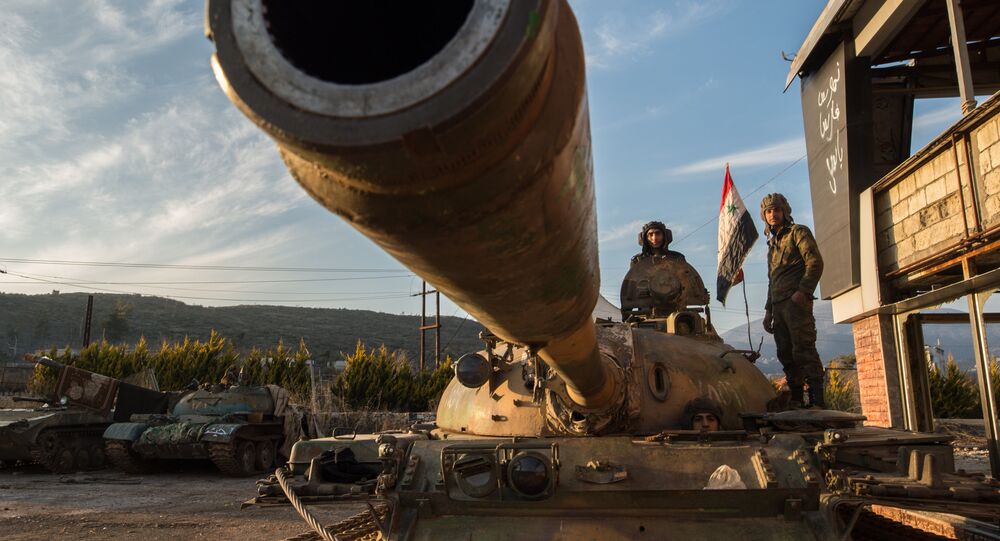 The dramatic success of the Syrian Army's operation to liberate Aleppo province and to surround the jihadist-held section of the key city of Aleppo has left Washington scrambling to find ways to "delay or derail" the operation "and avoid the impending collapse of US policy in Syria," writes independent US journalist Mike Whitney.

In his analysis for CounterPunch magazine, the freelance journalist called the Syrian Army's successes in the country's north a "game-changing triumph."

"Last week's game-changing triumph in northern Syria has moved the Russian-led coalition to within striking distance of a decisive victory in Aleppo. After breaking the 40 month-long siege on the cities of Nuble and Zahraa, the Syrian Arab Army (SAA) has encircled the country's industrial hub and is gradually tightening the noose," the journalist writes.

© AFP 2021 / SANA
The Aleppo Pocket: Turkey Running Out of Time for Its Plans to Invade Syria
With the Syrian Army now within ten kilometers of encircling the city, "critical supply lines have been cut, leaving the Sunni extremists and anti-government militias stranded inside a vast, urban cauldron." As a result, the journalist suggests, "it's only a matter of time before these disparate renegades are either killed or forced to surrender."

Ultimately, Whitney notes, "a victory in Aleppo will change the course of the war by restoring government control over the densely-populated western corridor. This is why the Obama administration is frantically searching for ways to either delay or derail the Russian-led juggernaut and avoid the impending collapse of US policy in Syria."

The peace talks in Geneva, the journalist says, "were convened with one goal in mind: to prevent Syrian President Bashar al-Assad and loyalist forces from retaking Aleppo. The negotiations failed, however, when Washington's mercurial allies, the so-called 'moderate' rebels, refused to participate."

With the Wall Street Journal explaining that the opposition had withdrawn "under pressure from Saudi Arabia and Turkey, two of the main backers of the rebels," Whitney recalled that "the WSJ's admission was later confirmed by Secretary of State John Kerry who, according to a report in the Middle East Eye, 'blamed the Syrian opposition for leaving the talks and paving the way for a joint offensive by the Syrian government and Russia on Aleppo.'"

© REUTERS / Abdalrhman Ismail
Western TV Reveals Old Aleppo Wreckage, Attributes it to Russian Operation in Syria
"None of this will surprise readers who followed the talks closely," Whitney says. "The meetings were surrounded by confusion from the very onset. The US delegation headed by Kerry was focused entirely on reaching an agreement that would involve a ceasefire and stop the government-led onslaught."

At the same time, "the Saudis, Turks and opposition leaders…were on a different page altogether. They seemed oblivious to the dire situation on the ground, where their jihadist foot soldiers were taking heavier losses by the day. Kerry, the realist, was looking for a way to stand-down and save US-backed militants from certain annihilation. But the Saudis and Turks felt they had a strong-enough hand to make demands."

Ultimately, "the clash in viewpoints was bound to produce disappointing results, which it did. The meetings were canceled before they ever began. Nothing was settled."

In their commentary on the disrupted talks, even much of the Western media, including the Wall Street Journal, came around to admitting that "some, but not all" of the groups funded and armed by Saudi Arabia and Turkey "collaborate with the al-Qaeda-linked Nusra Front," giving "the regime and its allies fodder for their claim that they are fighting terrorism."

© Sputnik / Dmitriy Vinogradov
Russian Warplanes Eliminate Two High-Ranking Terrorist Commanders
"This," Whitney writes, "should dispel any illusion that the fighters that are trying to topple the government are merely disgruntled nationalists determined to remove an 'evil dictator'. That is not the case at all. While there are a fair amount of indigenous insurgents, the bulk of fighters are Sunni extremists bent on removing Assad and creating an Islamic Caliphate."

"This is why Moscow refused to implement a ceasefire during the talks in Geneva. Russia adamantly opposes any remedy that allows internationally-recognized terrorists from escaping their eternal reward."

The US Secretary of State, meanwhile, has been disingenuous with his suggestions that Russia had earlier agreed to a ceasefire, the journalist says.

"This is false and Kerry knows it. Moscow has tried to be flexible about other so-called 'moderate' opposition forces, but when it comes to ISIS [Daesh], Jabhat Al-Nusra (Syrian Al-Qaeda group), Jaysh Al-Mujahiddeen, Harakat Nouriddeen Al-Zinki, and Harakat Ahrar Al-Sham, Russian leaders have repeatedly said that they will not relent until the jihadists are either killed or captured. This is why Russia's airstrikes continued during Geneva, because most of the fighters in Aleppo are dyed-in-the-wool terrorists."

© AFP 2021 / GEORGES OURFALIAN
The Syrian Army is Not Attacking Aleppo But Defending It
Moreover, Whitney recalls, UN Security Council Resolution 2254, unanimously adopted late last year in the aims of creating a ceasefire and political settlement in Syria, calls on member states "to prevent and suppress terrorist acts committed specifically by Islamic State in Iraq and the Levant, Al-Nusra Front (ANF), and all other individuals, groups, undertakings, and entities associated with Al-Qaeda or ISIl, and other terrorist groups…and to eradicate the safe haven they have established over significant parts of Syria."

Additionally, the resolution "notes that the aforementioned ceasefire will not apply to offensive or defensive actions against these individuals, groups, undertakings and entities."

"In other words," the journalist writes, "Moscow is not going to comply with any ceasefire that spares homicidal jihadists or undermines UN resolution 2254. Russian military operations are going to continue until ISIS, al-Nusra and the other terrorist militias are defeated."

Citing Secretary Kerry's plans to meet with Foreign Minister Sergei Lavrov in Munich on Thursday to discuss "all aspects of the Syrian settlement in line with UN Security Council resolution 2254," Whitney notes that this indicates that "Kerry [still] has not abandoned the diplomatic track."

"The emergency meeting underscores the Obama administration's utter desperation in the face of the inexorable Russian-led military offensive. It's clear now that Obama and his lieutenants see the handwriting on the wall and realize that their…plan to use proxy armies to remove Assad and splinter the country into three powerless regions is doomed to fail."

As for Turkey and Saudi Arabia…

© AFP 2021 / GEORGE OURFALIAN
Nowhere to Hide: After Freeing Aleppo Syrian Army, Russian Aircraft Could Focus on Raqqa
Unfortunately, the journalist notes, "while last week's fighting in northern Aleppo has transformed the battlespace and shifted the momentum in favor of the government…it has not yet dampened support for the jihadists in places like Ankara or Riyadh."

"In fact, the Saudis have offered to deploy ground troops to Syria provided they are put under US command…At the same time, President Recep Tayyip Erdogan has admitted that Turkey will not stay on the sidelines if it is asked to participate in a future campaign."

Thus, "while it is impossible to know whether Turkey, Saudi Arabia or the US will actually invade Syria, it's clear by the panicky reaction to the encirclement of Aleppo, that all three countries feel their regional ambitions are more closely aligned with those of the jihadists than with the elected government in Damascus. This tacit alliance between the militants and their sponsors speaks volumes about the credibility of Washington's fake war on terror."

Ultimately, Whitney recaps, "in less than five months, loyalist [Syrian] forces aided by heavy Russian air cover have shifted the balance of power in Syria, forced thousands of terrorists insurgents to flee their strongholds in the west, cleared the way for the return of millions of refugees and displaced civilians, and sabotaged the malign plan to reshape the country so that it better serves Washington's geopolitical interests."

"The war is far from over, but it's beginning to look like Putin's gamble is going to pay off after all," the journalist concludes.