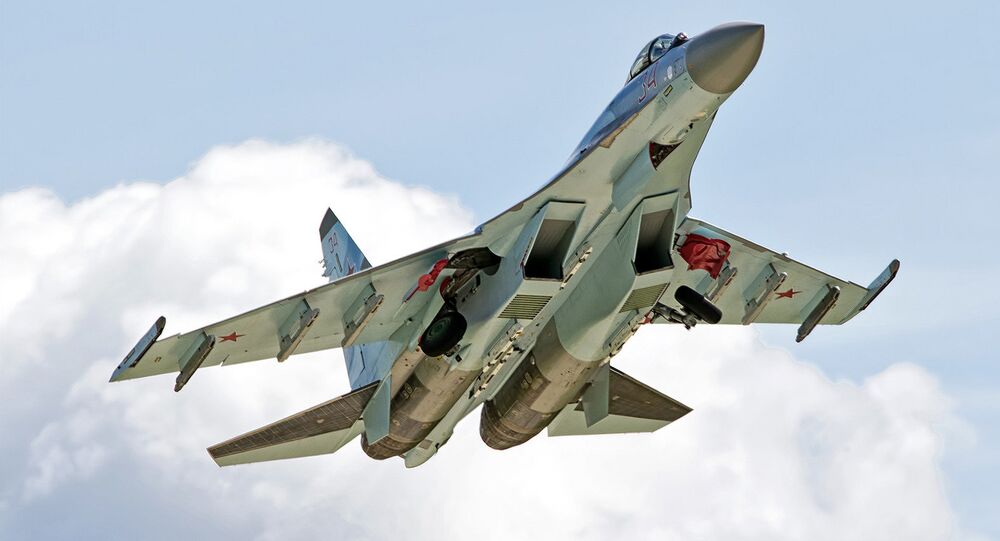 The deployment of Russia's super-maneuverable multirole Su-35S fighter jets in Syria immediately grabbed global headlines, which touted the warplane as "one of the world's most dangerous fighters."

© Sputnik / Vladimir Astapkovich
Top Gun 2016: Russia's Super-Advanced Fighter Jet Enters Service This Year
Russia's deployment of four state-of-the-art Su-35S fighter jets to Syria swiftly hit international headlines, with Western media describing the Su-35 as one of the most dangerous fighters in the world," according to the Russian newspaper Rossiyskaya Gazeta.

The newspaper mentioned the German magazine Stern, which stated that the Su-35S can be considered the world's deadliest fighter jet other than the fifth-generation US F-22.

As far as flight characteristics are concerned, the Su-35 is significantly superior to its competitors, combining the best features of the fourth generation fighter and the basic features and properties of a fifth generation warplane, according to Stern.

The magazine was echoed by the US newspaper Washington Times, which said that the Su-35S will add significantly to Russia's ability to protect its aircraft in any area of the Middle East, in light of Turkey's downing of a Russian bomber in Syria in November 2015.

"The deployment also sends a message to Turkey that, in combination with the S-400 anti-aircraft missile system, Russia can defend its aircraft anywhere in theater with weapon systems equal to or even more capable than NATO can field," the newspaper said.

The US international affairs magazine The National Interest in turn quoted a high-ranking US military official as saying he was quite impressed with the Su-35S.

"It's a great airplane and very dangerous, especially if they make a lot of them. I think even an AESA [active electronically scanned array-radar equipped F-15C] Eagle and [the Boeing F/A-18E/F] Super Hornet would both have their hands full," he said.

The Su-35S's super-maneuverability is provided by a new engine with thrust vector control, which allows the aircraft to reach supersonic speeds without using afterburners.

Defined as a Generation 4++ fighter, the Su-35S is capable of flying at a speed of up to 2,400 kilometers per hour and ascending to a height of 20,000 meters. The plane's maximum range stands at 3,600 kilometers, and with an additional fuel tank the figure can be increased by 900 kilometers.

© Sputnik / Maxim Blinov
Going Global: Russian Su-34 on the Way to Become Export Bestseller
Notably, the Su-35S was developed with the help of high technology used in the creation of Russia's fifth generation aircraft, the T-50 PAK FA. For example, the Su-35S's crew consists of one pilot, and the plane is controlled without using analog devices, which were replaced with just two screens on which all the information is displayed.

Western military experts were especially impressed with the Su-35S's sophisticated phased-array radar control system Irbis, which allows the plane to detect targets at distances of up to 400 kilometers, as well as track aerial targets and engage up to eight of these targets simultaneously.

On February 1, Russian Defense Ministry spokesman Igor Konashenkov said that the four Su-35S fighters have been deployed to Hmeymim Airbase in Syria. The warplanes are expected to provide coverage for SU-24 bombers, which launch airstrikes on Daesh and Al-Nusra Front militants in Syria.