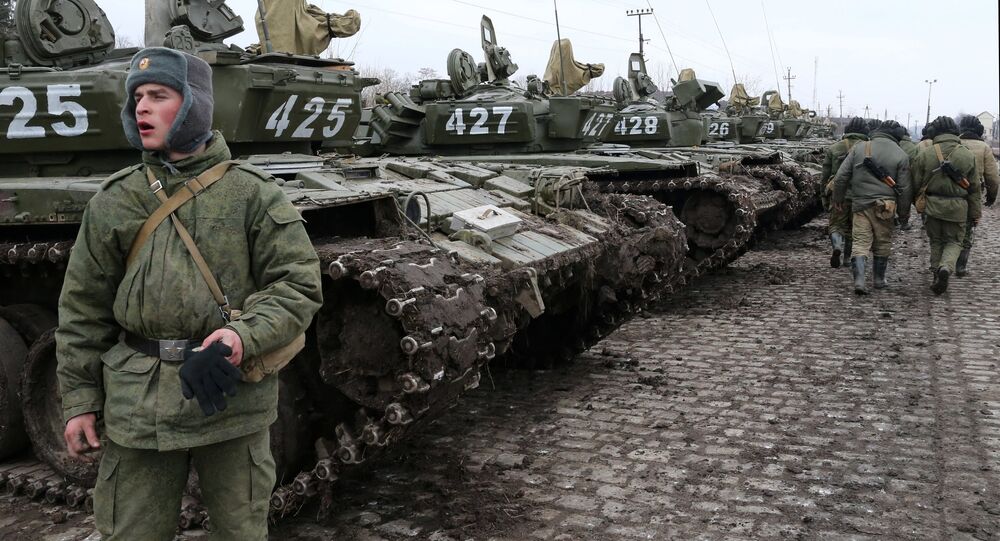 As the North Atlantic Alliance continues to expand its presence in the Baltic countries, Russian experts warn that the US-led alliance is attempting to turn the region into a staging area from which a possible invasion of Russia might take place.

© REUTERS / Jonathan Ernst
Reality Check: Obama's Final State of the Union Mixes Fact and Fiction
In his swansong State of the Union address before Congress, President Barack Obama indicated that the US would "make sure [that] other countries pull their own weight" in helping Washington contain its geopolitical opponents.

Commenting on the president's remarks, journalist Vasily Vankov suggested that for their part, "Washington's Baltic satellites can only welcome a situation in which they will be used as a stick with whose help the Americans can have a smack at the Russian bear."

In his analysis for independent Russian newspaper Svobodnaya Pressa, Vankov recalled that, "impatient ahead of the 'shift change' set to take place in the White House, Baltic politicians have raised another tantrum, using the old tune about the 'Russian threat'. Latvian politician and economist Uldis Osis recently suggested that if Republican frontrunner Donald Trump wins the election, Washington will 'give away' the Baltics, Syria and Ukraine to Russia."

"Apparently," Vankov writes, "this absurd scenario is taken seriously among the political establishment in the Baltics. At the very least, its officials are doing everything possible to transform the once peaceful, almost pastoral region into a citadel bristling with American bayonets along a potential new eastern front."

"The militarization of the Baltic states is taking place at an accelerated pace," the journalist notes, citing the arrival of more and more US heavy equipment, large-scale NATO drills, parades 300 meters from the Russian border, and the creation of new army and air force bases stretching across the region.

​"In response to just indignation on the part of the Russian Foreign Ministry [over the creation of one such base in Lithuania], Lithuanian Defense Minister Juozas Olekas characteristically replied that his country's moves were 'forced measures' taken in connection with Russia's 'takeover of Ukrainian territory' and its 'aggressive onslaught' in Syria."

"And it seems," Vankov warns, "that the Pentagon has no plans to stop there. Officials have confirmed plans to build warehouses for the forward deployment of military equipment in the Baltic countries, despite the fact that such a move would violate a key provision of the 1997 NATO-Russia Founding Act. Furthermore, this summer's NATO summit in Warsaw will discuss the placement of increased NATO forces in the region on a permanent (!) basis."

© AP Photo / Mindaugas Kulbis
Wakeup Call: NATO Will Never Achieve Peace 'Through Superior Firepower' in Europe
Commenting on the developments, Ivan Konovalov, the director of the Center for the Study of Strategic Trends, a Moscow-based military think tank, told Svobodnaya Pressa that NATO's moves to turn the Baltics into a potential staging area for an invasion of Russia is undoubtedly viewed as a threat in Moscow.

"I would like to begin by drawing attention to the fact that Moscow has adequately assessed the situation," Konovalov noted. "A few days ago, the Defense Ministry announced the formation of three new divisions in the western direction. Before the Ukrainian crisis, the area was almost entirely undefended."

For their part, the analyst suggested, the Baltic countries' political elites "are using the worsening confrontation between the West and Russia for their own purposes. To begin with, the presence of US and NATO troops on their territory benefits them economically."

"The military lobby in the Baltic countries has achieved what they were after – the allocation of budgetary funds for armies which could previously be categorized only as 'dwarf' in scale. At the same time, the presence of foreign troops will more than reimburse any financial losses. One can only imagine how much the Americans will lay out for the new air bases, of which there are now three in the Baltics. The cost of a full-fledged base, when accounting for aircraft and the ground components, can run upwards of a billion dollars a year."

"For this reason," Konovalov explained, "our restless Baltic neighbors are trying to gain permanent bases on their territory – we are talking about big money, which will come in handy for the budgets of countries whose economies have shriveled as a result of the economic crisis and the sanctions war with Russia."

© AFP 2021 / FRANCISCO LEONG
'Not Directed Against Anyone'? NATO 'Categorically' Denies It's a Security Threat to Russia
Commenting on NATO officials' recent "categorical denial" that NATO's military buildup poses any threat to Moscow, Konovalov bluntly retorted that "surely you must agree that it is difficult to see how Abrams tanks and artillery can be considered equipment with a purely defensive purpose? Russia was forced to respond because it reminded it of the situation in 1941, when the Germans moved large formations up to our borders, while simultaneously talking about their defensive nature."

As for the current bases' rotational nature, the analyst noted that it makes little difference. "Yes, NATO is increasing its presence near Russia's northwest borders on a rotating basis, but by and large, this doesn't change much. Obviously, they do not want to completely throw out the NATO-Russia Founding Act, because that would untie Moscow's hands. However, without any fanfare, 300 pieces of NATO heavy equipment have appeared on Russia's borders. It may not seem like much, but this is already a division-sized force. And to think – only a couple of years ago, Estonia had only one old T-55 tank, which it borrowed from neighboring Latvia to hold military exercises."

Ultimately, Konovalov warns, "given the pace of the military buildup, it's not hard to imagine how many pieces of equipment the Baltics might accumulate — say a year from now."

As for the Russian response to the buildup, the expert notes that Russia "is changing its plans for defense – including the transfer of forces to the western direction. And this is absolutely justified. It is well known that in [Russian] military history, the enemy has most commonly attacked from the west. The main obstacle for invasion has always been the Belarusian marshland. Therefore, they usually bypass the marshes via the northwest and the southwest."

© Sputnik / Igor Zarembo
US Hawks Dream Up Russian Threat to Baltics, 'Forget' to Provide Motive
"By and large, the most convenient bridgehead for an attack on Russia by conventional forces has been via the southern direction. The Germans broke through to Stalingrad via Ukraine. And in the north, they could not pass, stopping at Leningrad…Incidentally, the Wehrmacht's northern breakthrough failed not least because the Baltic states at the time were part of the Soviet Union. Here, the Germans were forced to break the first line of defense. The defense of Liepaja, Latvia, for example, lasted for almost a week."

As for the worrying prospect of the US deploying tactical nuclear weapons in the Baltics, Konovalov explained that this too is now more likely, given that the latest modification of the B-61 variable yield nuclear bomb can be placed on any airborne platform, and is not limited to strategic bombers.

"The same NATO planes which are now permanently patrolling Baltic airspace, flying near our borders, could be loaded up [with such weapons]. Europe now has 200 such bombs. Accordingly, the 16 aircraft at the bases at Zokniai, Lithuania or Amari, Estonia, can carry them onboard. And the pilots of these countries have been trained on how to use such weapons."

Speaking to Svobodnaya Pressa, veteran defense commentator Viktor Litovkin agreed with his counterpart that ultimately, "the rotational character of the existing bases, in fact, is of little importance. [All it means is that] one group leaves, and another comes to take their place."

As to whether the buildup in the Baltics and elsewhere in Eastern Europe violates the spirit of the NATO-Russia Founding Act, Litovkin suggested that in his view, "it obviously does…The Pentagon uses uncertain wording, which forbids the placing of 'significant numbers of troops' [in the region]. What precisely is considered 'significant'? A company-sized force? A battalion? A regiment? A brigade? It is unclear. Moreover, Washington does not want to negotiate with Moscow on the concretization of this fuzzy definition."

© AFP 2021 / GEORGES GOBET
Lavrov: Some NATO Members Justify Expansion by Claiming Russian Aggression in Crimea
Ultimately, the analyst notes, "NATO will not risk an invasion of Russia. But the deployment of military bases in the Baltics is akin to a situation where you get a stone caught in your shoe. If you cannot shake it out, it will be a constant irritant, and may eventually make it painful to walk."

"This NATO 'stone in our shoe' will force Moscow to react. And the US is actively trying to provoke another arms race in order to weaken our country economically. The Baltic states' leaders also benefit – receiving rent for the bases, and taxes for local budgets. Therefore, I would say that the anti-Russian hysteria among the Baltic countries' political elites have a multi-valued character."

Emphasizing that Russia full realizes the risks created by NATO's provocations, Litovkin concludes that in any case, "the three new divisions, referred to by Defense Minister Sergei Shoigu, are only one small part of the measures Russia will take to ensure the security of its western borders."

NATO Will Never Achieve Peace 'Through Superior Firepower' in Europe

US Hawks Dream Up Russian Threat to Baltics, 'Forget' to Provide Motive