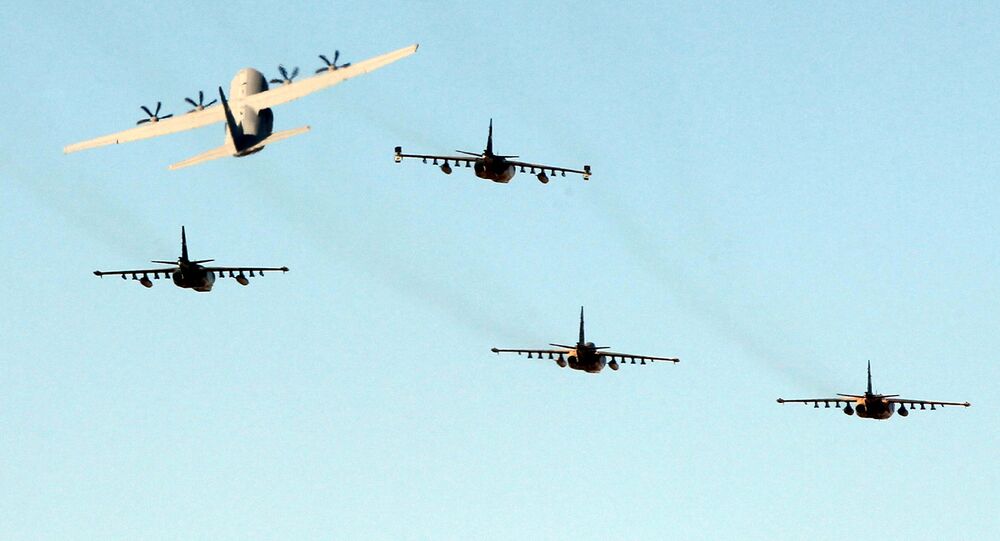 The prime minister of Iraq claimed this weekend that the country’s air force does a better job striking Daesh across the country than the whole US-led '60+ nation' coalition.

© REUTERS / STR
Iraqi PM Abadi Visits Ramadi After Liberation From Daesh
The international coalition, led by the United States, carries out just 40 percent of airstrikes against Daesh terrorists in Iraq, while the nation’s armed forces get 60 percent of the job done, Iraqi Prime-Minister Haider al-Abadi claimed on Saturday, according to Reuters.

However, the country still needs support from other countries to be able to liberate the rest of Iraq from jihadists, the head of the Iraqi government said at a ceremony in Baghdad broadcast on local TV. First and foremost this relates to armaments, training and – nevertheless – air cover, al-Abadi explained.

PM Al-Abadi congratulates the Iraqi Army on its Founding Day, praising their efforts in 2015 and saluting the martyrs

​A Pentagon spokesman praised the Iraqi Armed Forces for their successful operation in Ramadi during a recent press-conference. In contrast, Col. Steve Warren, Operation Inherent Resolve spokesman, played up the role played by the US-led coalition airstrikes.

​“We’ve continued to increase both the pace and the intensity of airstrikes in Iraq and Syria,” Warren said on Wednesday. “When our airstrikes are coupled with local ground operations, we see ISIL having to react and move around the battlefield, which, in turn, just makes it easier for us to strike them.”

Mutual respect between Nations will be one of the keys to defeating ISIL. @CJTFOIR is proud to stand beside Iraq. https://t.co/qRp9wIeFGr

​The US State Department approved a sale of 5,000 Hellfire air-to-ground missiles along with 10 training missiles, unspecified related equipment, and services to Iraq on Thursday. The estimated value of the contract is $800 million, the Pentagon’s Defense Security Cooperation Agency wrote in an online statement.

“The proposed sale will contribute to the foreign policy and national security goals of the United States by helping to improve a critical capability of the Iraqi Security Forces in defeating the Islamic State of Iraq and the Levant (ISIL),” the official statement read.

The Pentagon added $25 million worth of 120 Humvees to be manufactured for Iraq by May, 2016 to an existing contract on Wednesday. Late December, 2015, the US Department of Defense announced $13 million contract for logistical support for the existing fleet of Iraqi Air Force Cessna 208B military aircraft that carry Hellfire missiles.

Now here is something you don't see every day! An Iraqi Air Force Cessna AC-208 Caravan fires a Hellfire missile during…

​Additional crew training and support for Iraqi M1A1 tanks and M88 recovery vehicles worth $72.5 million will be also funded by the Pentagon, according to a December 17, 2015 release.

​Iraqi security forces have recently advanced to the center of Ramadi, the capital of Anbar province, after the city fell to Daesh militants in May, in Baghdad’s largest defeat against the extremist group.

US Ambassador to Iraq, Military Chief Meet With Iraqi PM in Baghdad