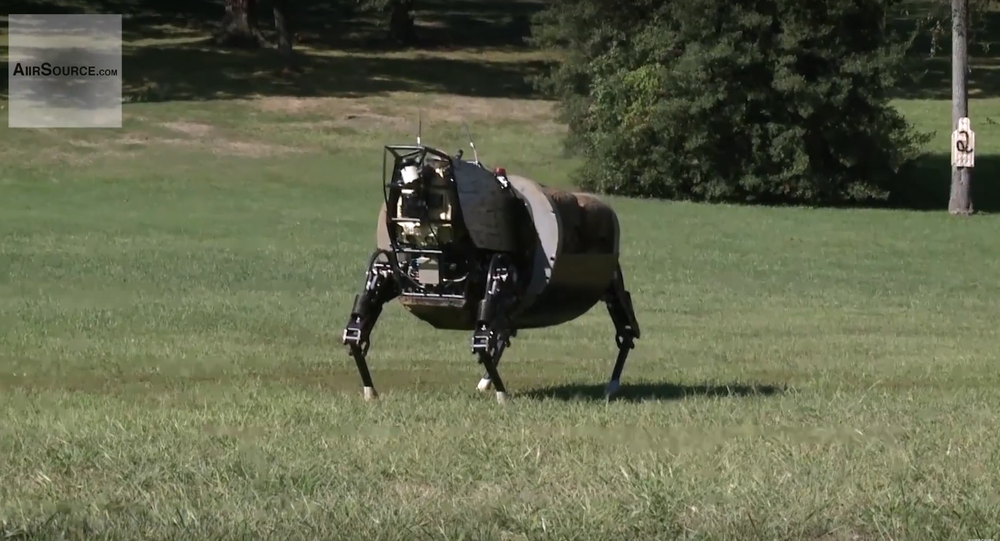 Two four-legged battlefield robots designed by Google's Boston Dynamics were to become ultimate comrades-in-arms for American troops – capable of carrying kits and crossing rough terrain – but have now been turned out by the US military as being loud and ineffective chunks of metal.

© Sputnik / Vladimir Astapkovich
US Rushing to Keep Up With Russian, Chinese Killer Robots
Both models — the Legged Squad Support System (LS3) and Spot — produced in cooperation with the Pentagon’s DARPA research division, failed to achieve their main goals of becoming irreplaceable assistants for Marines, according to Defense One.

LS3, dubbed Cujo after a killer dog in a Stephen King novel, was five years in development before being unveiled in 2012. The machine was designed to be a robotic mule to carry loads weighing over 400 pounds and move through rugged terrain maneuvering around large obstacles that are impracticable for other all-terrain vehicles.

But when it was first tested at the 2014 Rim of the Pacific military training event, Cujo had many problems and was projected to not be used by the military in the foreseeable future.

Kyle Olson, a spokesman for the Warfighting Lab, pointed out that the robot’s gas-powered internal combustion engine is too noisy for military missions.

“As Marines were using it, there was the challenge of seeing the potential possibility because of the limitations of the robot itself,” Olson said on military.com. “They took it as it was: a loud robot that’s going to give away their position.”

According to the Daily Mail, the LS3 had other challenges that seemed insurmountable by the military, including repairs in the field and patrol integration.

Boston Dynamics took in to account the mistakes made while developing Cujo, and announced a new model called Spot. But the new model has been barely more useful than its predecessor.
© Flickr / wackystuff
Now Hiring: Pentagon's DARPA to Pay Top Dollar for Electronics Spies
Spot is powered by an electric engine, quieter than the gas engine used by the LS3, and this makes the new robot considerably less powerful. Spot is capable of carrying loads of only up to 40 pounds. In comparison every Marine ordinary carries about 100 pounds of gear on mission. Spot, like its predecessor, is too sophisticated to be quickly repaired in the field.

The list of disadvantages prevents Google’s robot dogs from military service in the near future. The best the Marines can gain for now, according to Defense One, is to use some of the technologies developed for “robot-dogs,” as well as the lessons learned from their failures, in creating other devices.