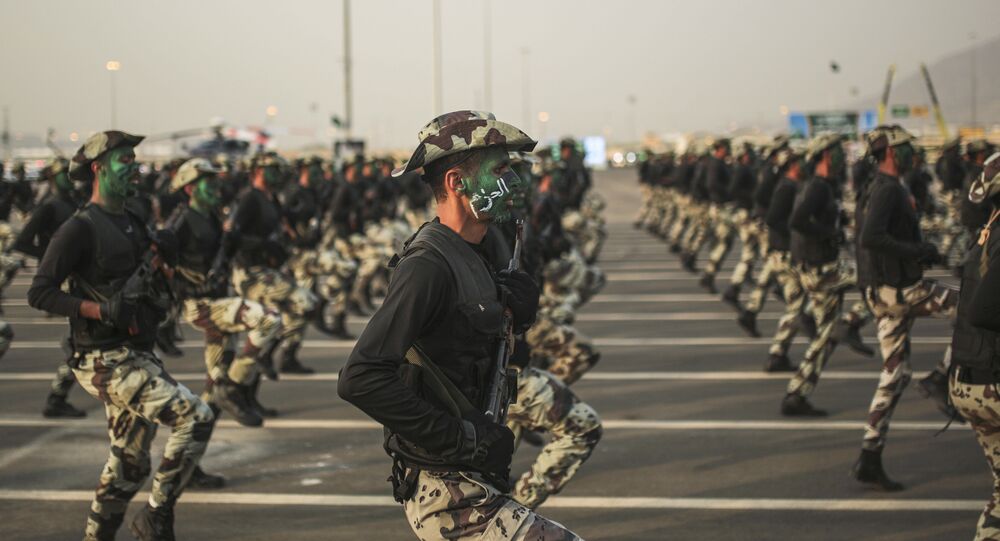 Will We See Saudi Troops in Iraq in the New Year?

Ever since Saudi Arabia announced that it had formed a new 34-nation 'Islamic coalition against terrorism', experts have been debating whether the new alliance will entangle itself in a military operation in Iraq and Syria. Recently, analytical website Iranian Diplomacy posed that very question to regional Iraqi official Ibrahim al-Jinabi.

Speaking to the resource, al-Jinabi, a member of the Judicial Council of Iraq's southwestern Anbar Governate (much of which is presently occupied by Daesh/ISIL terrorists) not only confirmed the possibility of Saudi troops joining the conflict, but suggested that this might happen in the very near future.

"The military component of the Islamo-Arabic coalition recently formed by Saudi Arabia intends to take part in the operation to clear Anbar province," the lawmaker unambiguously noted.

© Sputnik / Dmitriy Vinogradov
New Year’s Resolutions: Three Key Coalitions’ Ambitions in the Middle East
Asked whether the Riyadh's possible move has Washington's approval, al-Jinabi said that "this action by Saudi authorities will be carried out in accordance with a new US policy in Iraq, and is definitely coordinated with US leaders."

As for whether Baghdad will be informed, the official was less certain. "They might do so. They are certainly obliged to inform the country's central government. Most likely, they will do so, but if Baghdad suddenly expresses its disagreement with such a move, it will not be able to create any obstacles for the new coalition."

The consequences of Riyadh's adventure, al-Jinabi suggested, "would be turning Iraq into an arena of confrontation between the great powers and the settling of scores between the US, Russia and their allies."

In such a scenario, the official warned, "countries such as Russia and China will not just sit idly by. Of course, Russia will not be able to fight the Islamic countries. However, Moscow will be certain to support Iran's plans in the region, because now Russian and Iranian interests converge. In other words, Russia will be able to realize their interests through Iran. It is also very likely that China also will support Russia and Iran on this issue."

© AP Photo / SPA, File
Battleground Syria: Saudi Arabia and Turkey Seeking to 'Spark New Oil War'
Asked about the national makeup of the forces which could participate in such an operation, al-Jinabi noted that "the Arab-Islamic coalition is led by two countries: Saudi Arabia, which provides it with financial support, and Turkey, responsible for the military component. This is why, when Turkish troops entered Iraqi territory, serious pressure began to be exerted on Baghdad in order to prevent it from reacting and from taking any action against the Turks in the framework of regional and international organizations."

"We have all seen," the official noted, "how, after the Saudis announced the establishment of their Arab-Islamic coalition…Turkey agreed to withdraw its troops from Iraq." As for the coalition itself, "we now know that it has received support from the United States and Germany, whose representatives said that it would be good to see the new alliance take part in the war against Daesh."

"However, Turkey earlier said that it would be ready to take the fight to the terrorists only if military forces from other members of the coalition also take part in the war against Daesh in Iraq. Therefore, we are now seeing how [these forces] are preparing for an intervention in Iraq. In other words, the scenario of foreign intervention is being repeated, except this time, in the place of Turkish forces, Iraq will see the introduction of Arab forces on its territory."

© AFP 2021 / RAMI AL-SAYED
Turks Aren't Blind, Slam Saudi Coalition's Attempt to Legitimize Terrorists
For its part, al-Jinabi suggests, given that Ankara is also a member of Riyadh's coalition, they too are likely to deploy their forces to Iraq once again.

Ultimately, the official noted, Washington may be deliberately contributing to the Saudi-led effort by stalling Iraqi security forces' efforts to liberate their country from terrorist forces. "America's new policy," al-Jibani said, "is to refrain from engaging in direct confrontation. The US no longer intends to use its own army to take part in any war, but everywhere they can they will work to serve as their mediators."

Ankara Wants to Become a 'Military Force to Be Reckoned With'