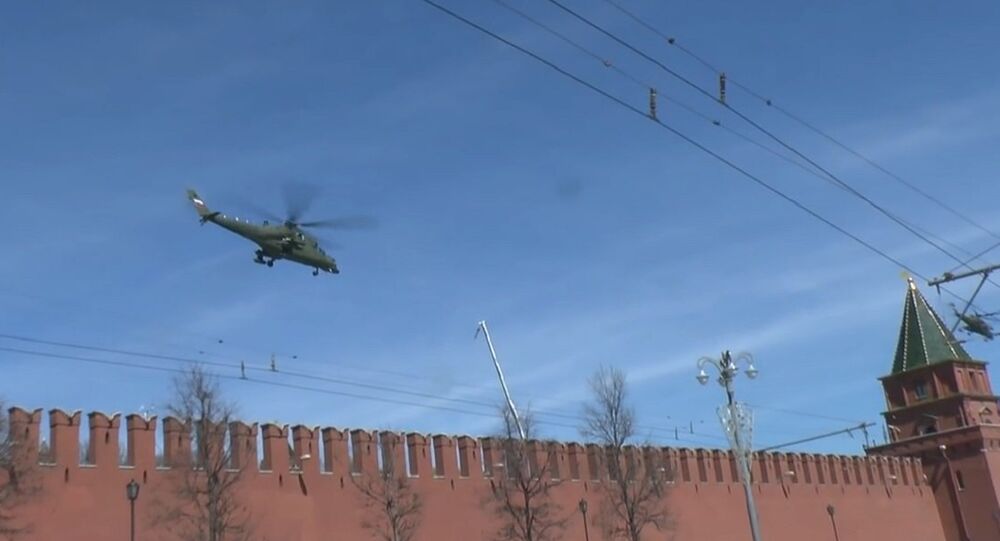 Russia’s enigmatic Mi-35MS helicopter was caught on camera by a passer-by near the Moscow Kremlin.

Their unconventional solid green color and the absence of any insignias, except for the Russian flag on the tails, prove that the choppers are special purpose. Cabin windows rectangular in shape can be seen in the footage.

The helicopters were also snapped with a number of antennas on their bodies as well as radio-electronic equipment mounted on the wings.

The Mi-35MS has been drawing enthusiasts’ interest for several years. For the first time, the mysterious chopper was spotted in February 2013 at a production facility in Rostov. Several months later, an Mi-35MS was photographed at the test range of the Mil Helicopter Factory in Moscow.

The helicopter was based on the Mi-35M. In comparison with its predecessor the Mi-24, the Mi-35M is equipped with a more powerful VK-2500 engine, fiberglass blades and an X-shaped control rotor. It also has short wings (the same as the earlier version of the Mi-24) and fixed landing gear.

According to available information, the special-purpose version – the Mi-35MS – is equipped with advanced avionics, a number of various sensors, a night-vision system, the Raduga-MB satellite station, a GLONASS/GPS navigation system, and an anti-jamming system. It also has a self-protection system against infra-red guided anti-aircraft missiles.

Last year, it was reported that three Mi-35MS choppers would be manufactured for the Russian military command.