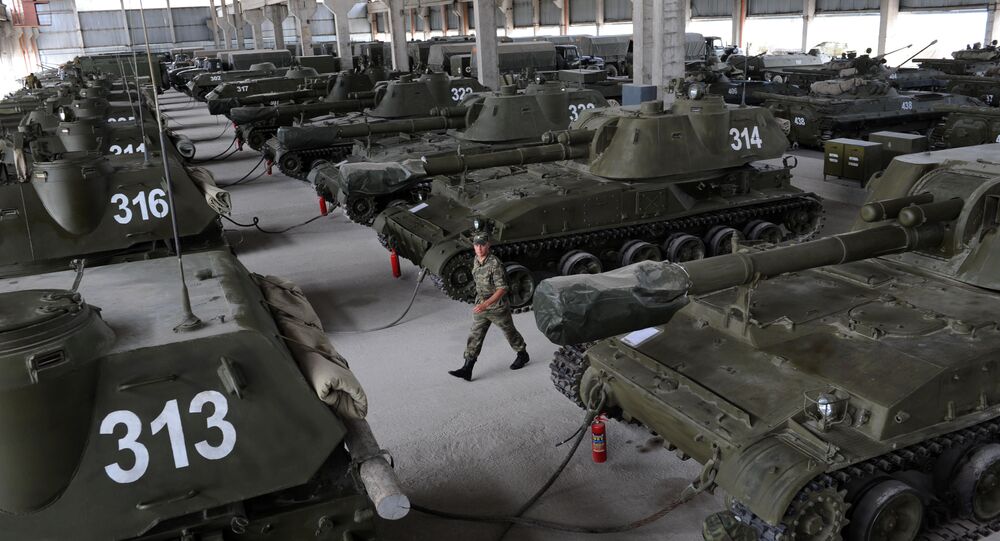 Unconfirmed reports suggesting that Russia plans to expand its presence in Syria, and rumors regarding a possible airbase in Belarus, have been swirling around in the Russian and Western media in recent months. How much truth is there in these rumors, and where is Russia's military power abroad really concentrated?

Earlier this month, gossipmongers began suggesting, citing reports from a London-based NGO, that Russia has plans to expand its presence in Syria via a second airbase. The Kremlin was quick to quash the rumors, but they continue to circulate.

Also in recent months, NATO has been speculating on Russia's potential to build a new airbase in neighboring Belarus, a rumor which lost steam earlier this week when Russian and Belarusian officials announced that the issue was undecided, and 'may not be discussed anymore'.

But enough unfounded rumors on possible bases. What bases abroad does Russia already have today, and where are they located?

© Photo : Ministry of Defence of the Russian Federation
Peace Through Firepower: Key 2015 Events for the Russian Military
Russia's military facilities abroad, Gazeta.ru explains, are located overwhelmingly on the territory of the former USSR. "They are, for the most part, airbases, air defense and missile defense systems, and space monitoring systems," the online newspaper notes.

According to the Defense Ministry, the total area of such objects is more than 700 thousand hectares, including waters in Lake Issyk Kul, Kyrgyzstan's largest lake.

After the Crimean referendum last year which returned the peninsula to Russia, the Russian Armed Forces gained control of all objects servicing the Russian Black Sea Fleet. Moreover, the military reacquired the 'Dnepr' radar station in Sevastopol (which will come back online next year following modernization), and the 'Pluton' deep space communications and planetary radar system in Yevpatoria, Crimea (also being modernized, and also to be put back online, operating Russian satellites, in 2016).

Abroad, Russian military objects, not all of them having the status of military bases, are located in countries including Belarus, Kazakhstan, Tajikistan, Armenia, and Kyrgyzstan, as well as Syria and Vietnam, and the Georgian and Moldovan breakaways of South Ossetia, Abkhazia, and Transnistria.

The Russian base abroad gathering the most attention today, Gazeta.ru recalls, is the Hmeymim airbase, located in Syria's northwestern province of Latakia. The base houses the Russian Aerospace Defense Forces contingent charged with smashing jihadist terrorists in Syria. "Legally," the paper notes, "the base does not belong to Russia, but it is being actively used by the Russian military." 600 Russian naval infantry guard the base.

© Sputnik / Dmitry Vinogradov
Russian aircraft at the Hmeymim Air Base in Syria.
© Sputnik / Valery Melnikov
Hand in Hand : Syrian Army, Russian Warplanes Wipe Out Militant Strongholds in Northern Latakia Province
Syria is also home to the Russian-leased basing, repair and logistics installation at Tartus. The only Russian Navy logistics center in the Mediterranean, the Tartus facility is maintained by civilian contractors, and is believed to be guarded by two platoons of naval infantry.

"Interestingly," Gazeta.ru points out "in early 2015, Syrian President Bashar Assad said that he would not mind if Russia turned the Tartus logistics facility into a full-fledged military base. At the moment, Russia has not confirmed that it has any plans to change the object's status."

Another logistics point used by ships of the Russian Navy is the southern Vietnamese city of Cam Ranh. Formerly used by Soviet and Russian air, naval and sigint forces, the base's Russian lease expired in 2004. However, late last year, Russia and Vietnam signed an agreement on the creation of a joint base for the maintenance and repair of submarines at Cam Ranh Bay. Also in 2014, Russian Il-78 tanker aircraft began using Cam Ranh Bay, enabling the refueling of Tu-95 strategic bombers in the Pacific region.

After repelling the Georgian attack on Abkhazia and South Ossetia in August 2008, Russian peacekeepers were deployed to the breakaway republics, which have since been recognized as independent states by Moscow, Venezuela and Nicaragua. Since 2008, South Ossetia has housed the 4th Russian Military airbase, headquartered in Tskhinvali, with other objects located in Java (a military encampment and airbase), Kurt (an airbase) and Dzartsemi (a training ground). The Russian contingent has 4,000 men.

© RIA Novosti . Grigoriy Sisoev
Compound of the Russian military base in Tskhinvali.

Another 4,000 Russian troops are based at the 7th Krasnodar base, located in the Gudauta and Ochamchira districts in Abkhazia. The base's headquarters is located in Sukhumi. Other objects include the Bombora military airfield near Gudauta, the training ground and part of the port at Ochamchira, and joint garrisons at Kodori Gorge and near the Inguri hydroelectric power station.

An estimated 1,500 Russian peacekeepers are located on a rotational basis in the republic of Transnistria, which broke off from Moldova in the early 1990s after Moldova broke off from the Soviet Union.

To its south, Russia has two military facilities in Armenia. The northern city of Gyumri, near the Georgian border contains the 102nd Russian military base of the Joint CIS Air Defense System (a unified network of air defense units with elements across the former Soviet Union). Operating under its aegis is the joint-basing airfield at Erebuni, recently upgraded with new administrative buildings, fuel-storage facilities and helicopter landing pads. The Gyumri base is believed to contain about 3,200 personnel.

TOF Press Service
Russia to Hold Counter-Terrorism Drills Ahead of New Year
To the west, Russia leases two bases in neighboring Belarus — with agreements to operate until 2020, for the moment. This includes the missile warning system near Baranovichi, central Belarus, again operating under the Joint CIS Air Defense System. The other object is the Russian VLF transmitter at of the 43rd Communications Center of the Russian Navy, situated near the town of Vileyka in the country's northwest. This station serves as an important facility for transmitting orders to Russian nuclear submarines in the Atlantic, in the Indian and some parts of the Pacific oceans. Furthermore, it also serves the Space Forces, the Aerospace Defense Forces, and the Strategic Rocket Forces. Russia's bases in Belarus have about 1,500 personnel.

Commenting on the rumors of a new base, Gazeta.ru recalls that "the issue of the creation of a Russian airbase has been discussed for a long time," with the Russian Defense Ministry announcing plans two years ago for basing a regiment of Su-27SM3 multirole fighters somewhere on Belarusian territory. So far, an appropriate location has not been found, and neither, apparently, has the political will.

Moving on to Central Asia, in Kyrgyzstan, Russia has a large airbase in Kant, to the west of the Kyrgyz capital of Bishkek. Open sources suggest that the airbase contains 250 officers and warrant officers, along with 150 conscripts. The base is believed to consist primarily of Su-25 close air support jet aircraft, along with a contingent of Mi-8 helicopters. It is also capable of receiving heavy-load An-22 and Il-76 transport aircraft, as well as passenger Tu-154, Yak-42, An-12 and other commercial aircraft.

In Kazakhstan, Russia uses the Sary Shagan testing grounds, located in the country's southeast, to test missile technology for air and missile defense. Sary Shagan also contains a radio engineering unit, and is often involved in large-scale exercises. Meanwhile, the city of Kostanay, in the country's northwest, contains a regiment of Russian transport aviation.

Kazakhstan also contains the world-renouned Baikonur Cosmodrome, which is leased by the 5th State Testing Range of the Russian Ministry of Defense.

Moving on, Tajikistan houses the 201st military base, containing 7,500 personnel, and is formally charged with assisting Tajik security forces in ensuring security, the defense of the Tajik-Afghan border (including from drug trafficking) among its main objectives. The base is effectively spread across three Tajik cities – the capital of Dushanbe, Kulob, and Qurghonteppa) plus three training grounds –at Lyaur, Momirak, and Sambulov.

"Tajikistan," Gazeta.ru notes, "also contains one of Russia's 'windows into space'." In the Pamir mountain range, located 2.2 km above sea level, Russia operates a space surveillance facility designed for the detection and analysis of space objects, including satellites, at altitudes including low, medium, and geostationary orbit, and some in high earth orbit.

In recent years, Russia has reduced its involvement abroad. This includes the closure of the Russian radar station at Gabala, Azerbaijan, once housing about 2,000 personnel, which was transferred back to Azerbaijan in 2013. In 2000, Russia dismantled the 'Daryal' radar station in Mukacheve, western Ukraine. The famous Lourdes SIGINT station, located in western Cuba and operated by Russian Foreign Intelligence, was closed in 2002. Rumors circulating over the past two years over the base's imminent reopening have been denied by the Cuban government.

Worldwide network of #US and #Russia #military bases pic.twitter.com/GjsbPPicC2

"The number of Russian military facilities abroad," Gazeta.ru concludes, "is relatively small. The United States, for its part, has a far larger number of bases – over two dozen, and has a military presence in almost all of Europe, the countries of the Persian Gulf, Afghanistan, South Korea, Japan, and Australia."

Peace Through Firepower: Key 2015 Events for the Russian Military

Russia to Hold Counter-Terrorism Drills Ahead of New Year