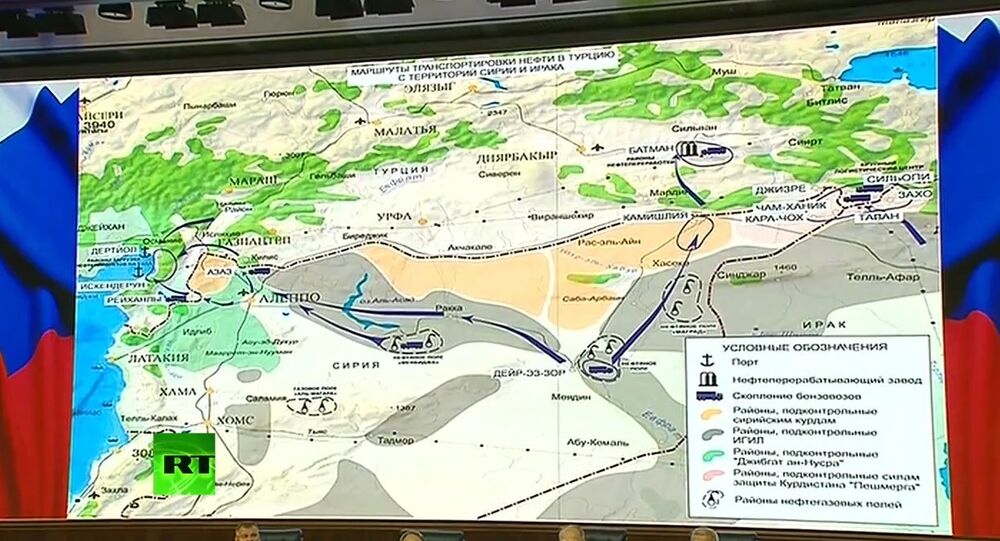 Turkish President Recep Tayyip Erdogan and his relatives are directly involved in trading illegal oil which belongs to Daesh (also known as the Islamic State), according to Russia's Defense Ministry.

“Revenues from the sale of oil are one of the most important sources of activity by terrorists in Syria. They earn around $2 billion annually, spending these funds on hiring militants from around the world and equipping them with weapons, equipment, and arms,” Russian Deputy Defense Minister Anatoly Antonov said during a briefing in Moscow.

The ministry provided photographs of columns of oil fuel tankers on the Turkish-Syrian border. Fuel tankers with oil freely cross the border between Turkey and Iraq, according to Russia's General Staff.

© Sputnik / Alexander Vilf
Russian Defense Ministry Presents Evidence of Illegal Oil Trade on Turkish-Syria Border (PHOTO, VIDEO)
These oil revenues are used not only to enrich the Turkish leadership but to arm terrorists as well, the General Staff stated.

Oil from Daesh-controlled areas in Syria is shipped to refineries in third countries after being transported to Turkey, the head of the Russian General Staff’s operative command said Wednesday.

Russian deputy defense minister said that Russia will continue to provide facts that Turkey steals from its neighbors, adding that it's a surprise no one in the West ever noticed that Erdogan's son is the owner of one of the largest energy companies, while the president's son-in-law was appointed energy minister.

Moscow calls on Ankara to provide access to places where, according to Russian data, Daesh oil trade centers are located, Antonov said.

"I am certain that there will be claims that everything you've seen here now is false. Well, if there are no such things, they [Turkey] should grant access to the places we showed journalists today," Antonov said after presenting satellite data and photos said to prove Turkey's involvement in illegal Daesh oil trade.

The group is designated a terrorist organization by numerous countries, including Russia and Turkey itself.