Ankara made headlines this week when it shot down a Russian Su-24 bomber, prompting some to speculate that the incident could lead to a military standoff. The National Interest came up with a listing of five Russian weapons that would surely convince Turkey to back off should it want to escalate the situation.

Interesting fact: the US magazine is not talking about ballistic missiles or tactical nuclear weapons, but rather those arms that would be ideal for a limited campaign, including bombers, guided missile cruisers and electronic warfare systems.

© Sputnik / Dmitriy Vinogradov
Russian pilots of the Su-34 at the Hmeimim base in Syria.

The Sukhoi Su-34 Fullback fighter-bomber, which made its combat debut in Syria, is probably the first weapon of war which comes to mind. The 4++ generation jet, which entered service in March 2014, is meant to replace the aging Sukhoi Su-24 Fencer.

"Compared to Turkey's F-16, Su-34 can carry more weapons and fuel so it enjoys a longer range. Russia currently has more than eighty Su-34s, of which about fifteen are based in Syria," the National Interest reported. 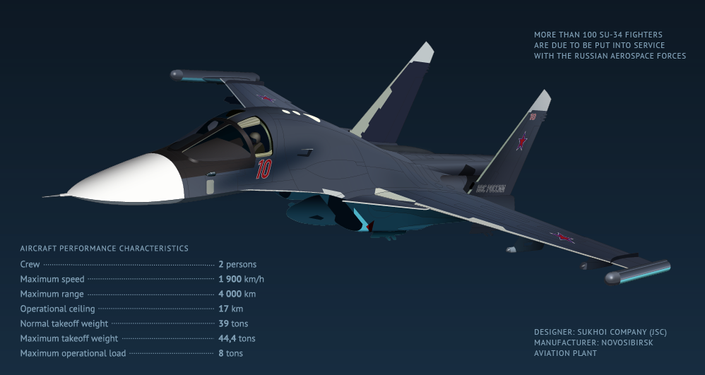 The Su-34, costing nearly $40 million apiece,  can accelerate to a maximum speed of 1,200 mph and has a maximum range of 2,500 miles without refueling.

"The Su-34 becomes an even deadlier adversary when we take into consideration its AA-10 and AA-12 air-to-air missiles," the media outlet observed.

© Sputnik / Mihail Mokrushin
Terrorists Were Informed About Attack on Russian Su-24 in Advance
The Krasukha-4 jamming platform is the latest version of a mobile electronic warfare system in service since 2014. It is designed to jam ground-based and airborne radars, including AWACS units, as well as low-orbit satellites.

The jammer boasts an operational range of nearly 190 miles and is said to be capable of permanently disrupting targeted radio-electronic devices, the National Interest noted.

Russian forces deployed to Syria are said to have one Krasukha-4 jammer in their arsenal.

"Krasukha-4 could blind TuAF's Peace Eagle AWACS planes and make it difficult for the Turkish side to generate the air picture of the eastern Mediterranean and Syria, and undermine its ability to coordinate scramble and interception missions against the Russians," the media outlet detailed.

Then there is the Moskva cruiser, the lead warship of the Slava-class ships.

The magazine also added that the guided missile cruiser might not be well protected against Turkey's Gür-class submarines, describing them as "silent and deadly."

If the abovementioned weapons are not enough to convince Turkey that deescalating tensions is the only option, highly trained Russian speacial operation forces coupled with the country's cyberwarfare capabilities will surely do the trick.