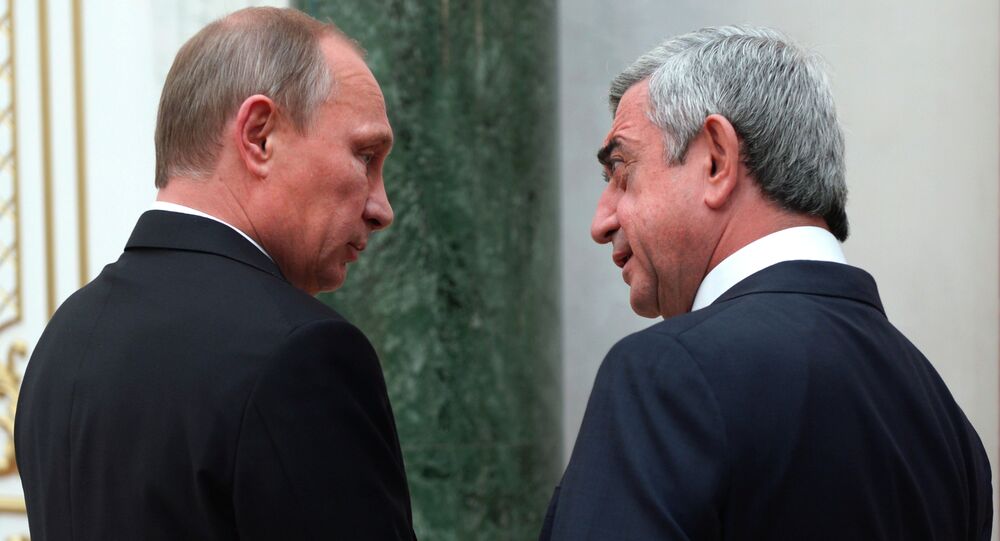 By signing an agreement with Armenia to create a joint missile air defense system in the South Caucasus, Russia has made a wise geopolitical move, US global intelligence company Stratfor reported.

Russian President Vladimir Putin made a brilliant move, as by signing the agreement with Armenia Russia essentially killed two birds with one stone.

First of all, Russia would boost its southern borders, as Moscow becomes more militarily involved in Syria. The possibility of ISIL jihadists slipping into Russia's southern Islamic republics is still a concern for Moscow.

"Moscow is keen to increase its ability to monitor its southern borders — a goal that a military presence in Armenia, with its proximity to the Middle East, is ideally suited to achieve," Stratfor reported.

The Russo-Armenian military cooperation in the Southern Caucasus would certainly upset Turkey's ambitions in the region.

© Sputnik / Sergey Guneev
Armenia, Azerbaijan Leaders Agree to Meet By End of 2015 - OSCE
Furthermore, as Georgia is moving closer to the West — the country recently opened a NATO training center and regularly holds joint military exercises with the US Army — Russia made a good move by signing the joint defense agreement with Armenia, thus enhancing Moscow's military presence in the region, Stratfor said.

"It would also be located in a geopolitically complex region where many other regional players have significant strategic interests," Stratfor commented about the Russo-Armenian cooperation in the Southern Caucasus.

In late September, despite not being a NATO member, Georgia became a member of the NATO Response Force (NRF).

Authenticity of ISIL Video Threatening Russia to Be Checked - Kremlin