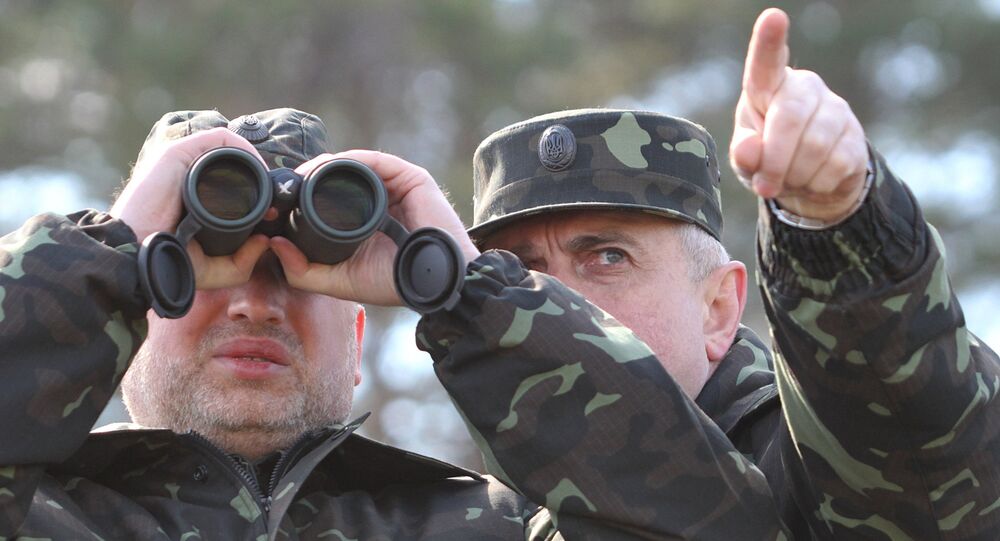 The successes of the Russian campaign of airstrikes in Syria appears to be giving authorities in Kiev the cold sweats, leaving them desperately trying to think of ways to reorganize the country's run-down air defense network.

The month and a half long Russian operation against Islamist terrorists in Syria seems to have made quite the impression on Kiev.

Late last week, National Security and Defense Council Secretary Oleksandr Turchynov said that beefing up the country's air defenses would be a big priority for the military next year. "We have been analyzing the events taking place in Syria especially closely, monitoring the Russian Aerospace Defense Forces' operations, in order to be able to offer stiff resistance should these forces be used against Ukraine," Turchynov said.

© AP Photo / Irina Gorbaseva
Ukraine Must Avoid Military Budget Cuts - National Security Secretary
With his statement, Turchynov contradicted the hysterical declarations made by Ukrainian officials over the past year and a half about the Ukrainian military fighting against the "Russian army" in eastern Ukraine.

Commenting on Turchynov's words in a recent article for Svobodnaya Pressa, journalist and military analyst Sergei Ischenko pointed out that "no contemporary army fights without its own combat aircraft, the Armed Forces of the Russian Federation included. If Russia really had gotten involved in fighting in the Donbass region, Turchynov would not have had to observe how bombs and missiles rained down on the Islamists in Syria; Ukraine's officials would have plenty of combat experience of their own to analyze."

Discussing the sorry state of the country's air defense network, once considered to be among the strongest in the world, Turchynov turned to conspiracy theories, suggesting that "in fact, those responsible for destroying the army, for deliberately destroying it, coordinating the process with the Russian Federation, have led to a situation where we now have real and serious problems in defending the Ukrainian-Russian border, and the country as a whole."

Leaving aside the absurd suggestion that Russia, whose own military was brought to the brink of collapse in the 1990s, could play any role in the corruption and cuts which destroyed Ukraine's defenses during the same period, Ischenko suggested that it's worth looking at the situation the country faces today.

Right now, the analyst noted, Ukraine's continuous anti-missile radar field, which once covered the entire country, is long gone. Left to rot for much of the 1990s, it collapsed completely in the 2000s, during the tenure of Orange 'revolutionary' president Viktor Yushchenko, as the old Soviet-era radar installations fell into disrepair one by one.

© Sputnik / Stringer
NATO to Keep Ukraine Out, But Modernize Kiev's Military
Incidentally, it was during this period, between 2004 and 2005, that Petro Poroshenko himself served as Secretary of the National Security and Defense Council, before being fired along with other ministers for corruption.

"This huge hole, no longer observed by any radar operators, allows literally anyone and anything to fly about," Ischenko noted. "Therefore, the strategy of zonal air defense (readiness to repel an enemy in a strategic direction) has been dropped in favor of a strategy of object defense (selective cover of at least the most important objects)."

This, the analyst explained, is the conclusion reached by the Military Council of Arseniy Yatsenyuk's People's Front party, which also explained in its recent report that the country's air defense forces have been cut down to "four anemic anti-aircraft missile brigades and nine anti-aircraft missile regiments."

One of the causes of the rapid degradation, according to the expert, is the fact that the lifespan of the anti-aircraft missiles, produced in factories in Russia, has run out, with no replacements ordered. This situation remains unlikely to change any time soon, given Kiev's virulent resistance to any form of cooperation with Moscow, especially in the defense field.

Ischenko pointed out that the country does have a few modern systems, including the S-300PT/PS and S-300 V, "although when it comes to the rockets for these systems, the same problem exists: their life span is running out. According to some estimates, only four anti-aircraft missile complexes can be more or less confidently said to be combat-ready in the whole of Ukraine –one near Dnipropetrovsk and three near Kiev."

And the problems do not end there. According to the Military Council's report, Ukraine's air defense forces do not have access to modern communications systems, with its antiquated Soviet-era systems running out the clock and considered ineffective for the conditions of modern war.

As for using the Air Force as a tool for air defense, Ischenko noted that this is not a possibility either, given that among the country's four tactical aviation brigades, only about 20 Su-27s and an equivalent number of MiG-29s are considered to be airworthy. "As for how many of them are in a condition to carry out combat operations and to return to their base –that remains a terrible military secret of the Ukrainian Armed Forces. Thus, Ukraine has a maximum of four dozen serviceable fighters in its ranks, and this following the 16 former Soviet air regiments of the 8-th Air Defense Army, 'privatized' by Ukraine in 1992!"

© Sputnik / Nikolay Lazarenko
Kiev Spends Final Part of Budget to Fight Against Alleged ‘Eastern Threat’
The expert noted that the rest of the planes, for the most part, were "sold for hard currency. Between 2005 and 2012 alone, Ukraine, with no combat aircraft industry of its own, exported 231 planes abroad, of which only six (3.3%) were new, with the rest (96.7%) previously operated by the Ukrainian Air Force."

In the wake of this nightmarish situation, Ukrainian Air Force Commander Sergei Drozdov recently announced that the country had plans to buy nearly 100 Su-27 and MiG-29 fighters, given the existence of the support infrastructure for such planes.

It remains unclear where Kiev will scrounge up such planes, given that Russia will be unlikely to sell to Ukraine, while the inventory of the countries of the former Eastern Bloc is both scarce (with a maximum of 9-12 basic model MiGs available, according to Ischenko) and run-down. Furthermore, with the MiGs estimated to cost between $5-8 million, and the Su-27s costing several times as much, it is unknown where the country is going to get the hundreds of millions of dollars necessary to make such a purchase.

Ukraine, US to Develop 5-Year 'Road Map' on Military Cooperation