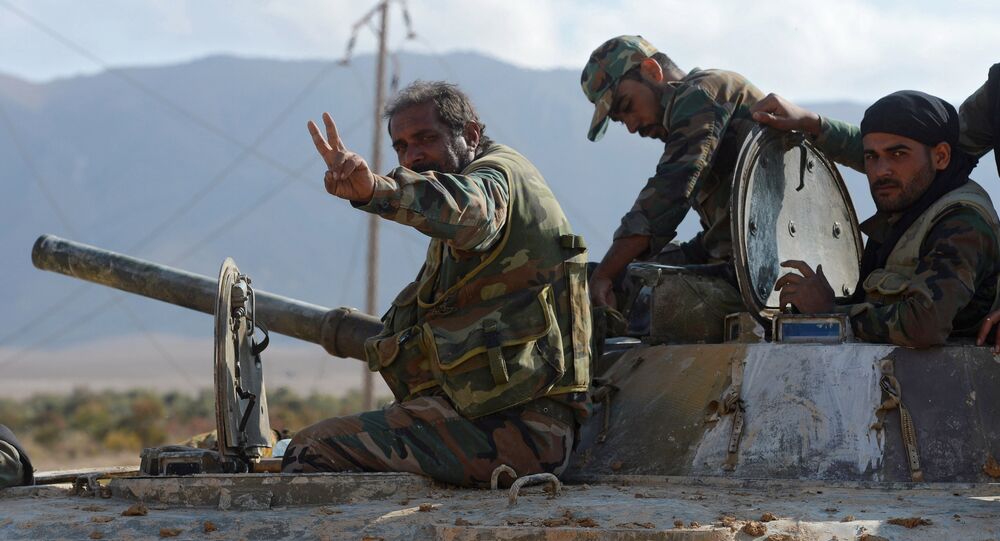 The Syrian armed forces have also repelled an attack of ISIL militants on an airbase near the eastern city of Deir ez-Zor, destroying 58 jihadists, according to SANA.

In the south of Aleppo Governorate, government forces took control of two villages, killing an unspecified number of adversaries, some of them aboard machine gun-equipped trucks.

© AFP 2021 / GEORGE OURFALIAN
With Russia's Aerial Assistance, Syrian Army Lifts Aleppo Siege
In the east of the province, the Syrian Arab army, alongside popular self-defense forces and the Lebanese Hezbollah, destroyed ISIL fortified positions and hideouts in several areas outside the city of Aleppo, including Sheikh Ahmad following a series of airstrikes by Russian Aerospace Defense Forces.

With the support of Russian airstrikes, the Syrian Army has recently taken control of approximately 250 square kilometers in Aleppo province.

The strategic offensive is aimed at lifting the almost three-year-long siege of the Syrian army’s Kuweyres airbase east of Aleppo, FARS points out.

“The latest reports from the battlefield said that the government forces are very close to seizing back full control over Sheikh Ahmad after killing tens of Takfiri [ISIL] terrorists,” FARS reported. “Hundreds of Syrian forces are under a tight siege at the airbase as a result of the occupation of vast areas surrounding the airport by the terrorists. The Syrian army's helicopters supply foodstuff and other needs to the Syrian troops defending the airport.”

Dozens of terrorists, their vehicles and munitions, mostly from al-Nusra front, have been also eliminated by government forces in Daraa province.

Terrorists acknowledged their heavy casualties on social media and confirmed the death of an al-Nusra Front commander Faisal Sharif, nicknamed Abu Omair al-Ansari, according to SANA.

The Syrian Air Force has been carrying out airstrikes against ISIL targets in various locations in Aleppo, Hama, Homs provinces over the weekend.