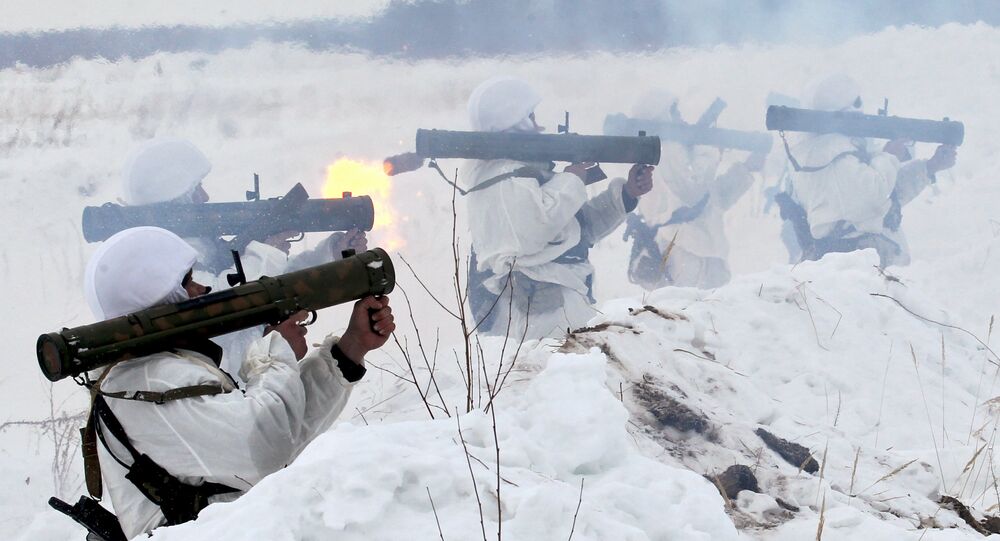 Military experts from Popular Mechanics, a US magazine of popular technology, are quite impressed with the capabilities of the Russian portable flamethrower system with a cute nickname Bumblebee, which nevertheless is capable of completely devastating enemy forces not only in the open but in bunkers, trenches, and even armored vehicles.

Russian rocket-propelled flame thrower, the Bumblebee, was originally developed due to the need for more effective fire power against an enemy entrenched in fortified positions, houses, caves and other solid cover.

© Sputnik / Alexander Vilf
Hell on Earth: Russian Heavy Flamethrower Shocks Viewers
It is a single-shot rocket launcher along the lines of the American LAW or AT4, the magazine says. Once used, the launcher is thrown away.

Classified as a flamethrower by the Russian military, the Bumblebee is actually a thermobaric weapon. It launches a warhead which uses a combination of an explosive charge and highly combustible fuel. When the rocket reaches the target, the fuel is dispersed in a cloud that is then detonated by the explosive charge.

Popular Mechanics military experts note that the resulting explosion is devastating, radiating a shockwave and fireball up to six or seven meters in diameter.

A thermobaric explosion is a capable weapon when used against troops in the open but is especially useful against troops in bunkers, trenches, and even armored vehicles, as the dispersing gas can enter small spaces and allow the fireball to expand inside.

Thermobarics are particularly devastating to buildings — a thermobaric round entering a structure can literally blow up the building from within with overpressure.

© Sputnik / Alexey Malgavko
The Origins of Russia's Funny Weapon Names Finally Revealed
The weapon attracted the attention of Popular Mechanics experts after one of the Russian bloggers claimed that it was spotted in Syria, being carried by a Syrian Army soldier.

“The Bumblebee's appearance in Syria is no surprise,” the magazine reasons, “its ability to devastate enemy forces in urban environments makes it an appealing weapon for urban warfare. Although heavy at 26 pounds, it has a simple sighting system that is easy to train soldiers to use and has a maximum range of 800 yards”.