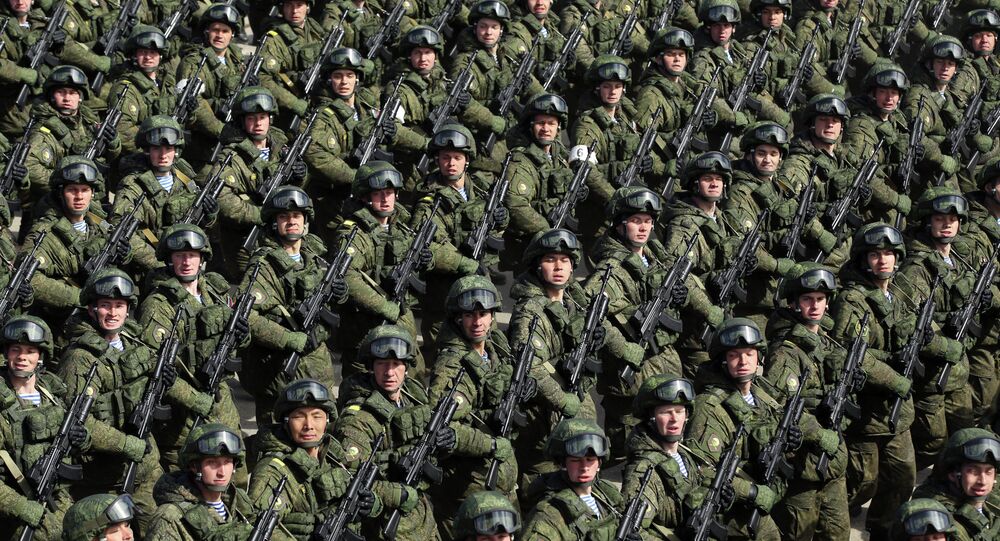 Russia's Armed Forces have reached the highest levels of combat readiness they've seen in decades, analysts speaking to RIA Novosti have suggested, noting that the air war against ISIL in Syria, together with the dramatic increase in military exercises of various kinds, demonstrate that efforts to modernize the military have proven successful.

Three years ago today, on November 6, 2012, Sergei Shoigu was appointed Russia's defense minister, replacing his disgraced predecessor, Anatoly Serdyukov, the former furniture salesman who had become mired in a major corruption scandal during his tenure.

Analysts suggest that in these three years, Shoigu has managed not only to get the military back on track and to restore its fighting capability, but to completely transform its image, in the eyes of both the Russian public and international observers.

Speaking with RIA Novosti, Col. Gen (Ret) Leonid Ivashov, vice president of the Moscow-based Academy on Geopolitical Affairs, explained that Shoigu's tenure has, "first and foremost, restored the fighting capability of the Army and the Navy."

© AP Photo / Mindaugas Kulbis
Better Not Mess With Russians: Pentagon Expert Says Russians Would ‘Annihilate’ US Army on Battlefield
Moreover, the expert noted that "the prestige of military service has grown, and today young people are looking to join the army, not just to serve there for some time under contract, but to commit their lives to the military."

This is quite a contrast to the situation just a few years ago, when it was considered desirable and even fashionable for many young men to find ways to avoid the one year of compulsory military service required of them under Russian law.

Finally, Ivashov suggested that recent events have demonstrated decisively that the modernization of the country's once dilapidated Soviet-era military, left to rot for lack of interest during most of the 1990s, and for lack of finances during much of the 2000s, is well underway.

The military is now being rearmed with completely "new, advanced military-technical systems," Ivashov noted. Furthermore, "what we are now witnessing in Syria, in the Caspian Sea [last month's launch of cruise missiles to attack ISIL] and at various military drills –this is in fact a check on the results of the work of the top people at the Defense Ministry. And as we have seen, the results are quite good," he added.

Sergei Grinyaev, the head of the Moscow-based Center for Strategic Estimates and Projections, echoed Ivashov's comments, noting that "today, the Russian armed forces have achieved a high level of combat readiness, meeting the requirements of the conditions of modern conflict, and proving capable of meeting not only today's challenges, but those of tomorrow as well."

Grinyaev believes that the Shoigu team's decision to dramatically increase the number of exercises and snap drills testing the readiness of various branches of the Armed Forces has played a critically important role in increasing the armed forces' effectiveness.

"Of course, were it not for the training and drilling –the command and staff games which have been held regularly in recent years, it would not be possible to see the results being achieved by the Aerospace Forces, whether it's in Syria, or generally in the framework of combat training," the expert noted.

© Sputnik / Evgeny Biyatov
Russia Undisputed Leader of International Army Games - Chief Referee
Grinyaev also pointed to the benefits of a new kind of military competition – the International Army Games. "I think that the benefits to [these games] are obvious. If we compare them to sports competitions, these are like exhibition games. But it is well known that exhibition games are made to be as close as possible to the main events. The same applies to real military life. All of these 'sports games' – the 'Tank Biathlon', the 'Aviadarts', etc. are without question simply exercises which take place in a peaceful environment," the expert noted.

As RIA Novosti explained, over the last three years, significant changes have been made to the entire structure of the Armed Forces. For example, in 2015, the country saw the creation of a new branch –the Aerospace Forces. Moreover, since 2013, the Armed Forces have seen the appearance of eight new operational units, over 25 divisions (combined arms units, aviation units, air defense units and units of surface ships) and 15 brigades.

Since 2012, a great deal of work has also been done to improve the Armed Forces' command and control systems, aimed at improving force efficiency and at strengthening defensive capabilities. These efforts have culminated in the creation of a new National Defense Control Center, allowing the defense minister and his staff to manage the country's entire military potential in real-time. Similar centers have been deployed regionally and territorially.

Defence Ministry RF
Former US Defense Secretary Acknowledges Russian Progress in Military Modernization
Between 2012-2015, the number of military exercises has more than doubled compared to the previous period (from 423 to 866), with drills carried out in coordination between the branches of service, and designed to be as close as possible to the tasks and objectives troops would face in  real life combat situations.