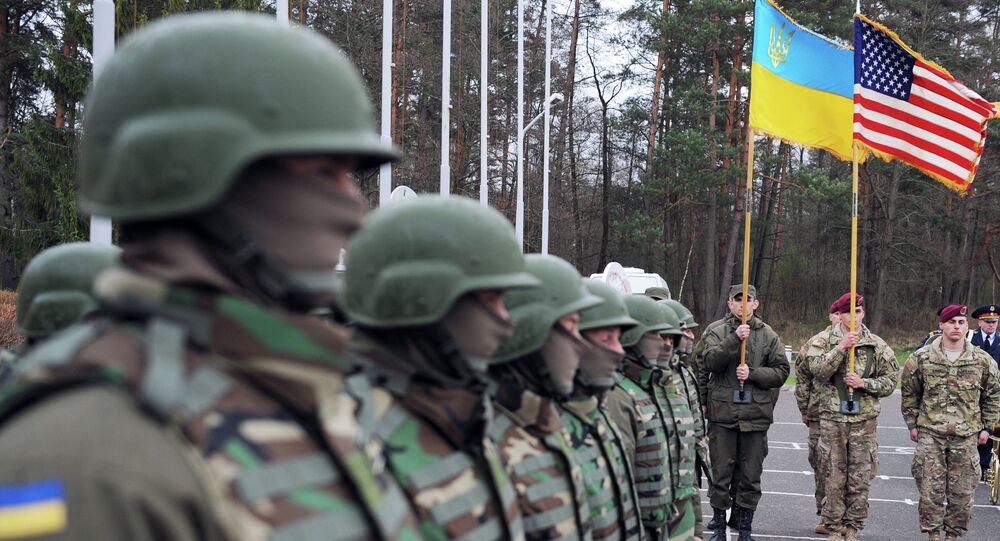 US to Train Ukrainian Military in Counter-Drone Tactics

US Department of Defense spokesperson Michelle Baldanza told Sputnik the US training program for the active Ukrainian military servicemen will include tactics to counter unmanned aerial vehicles, also known as drones.

WASHINGTON (Sputnik) — The US training program for the active Ukrainian military servicemen will include tactics to counter unmanned aerial vehicles, also known as drones, US Department of Defense spokesperson Michelle Baldanza told Sputnik.

"The Ukrainian MoD [Ministry of Defense] Forces will receive infantry-based, defensive-focused training at the individual and collective level," Baldanza said on Monday. "Specific blocks of instruction will include… counter-unmanned aerial vehicle tactics training."

About 300 US soldiers are expected to start training the Ukrainian security forces on November 23. The United States will train up to five battalions of Ukraine’s Ministry of Defense personnel and one battalion of Special Operations forces.

© AFP 2021 / SERGEI SUPINSKY
Dump the Junk: US Humvees Sent to Ukraine Are 20-30 Years Old, Have Canvas Doors
Ukrainian forces will receive medical and counter-improvised explosive device training, along with instructions in survival and equipment checks, according to the Defense Department.

"The special operations portion of the training will start with advanced individual techniques such as advanced land navigation and advanced marksmanship," Baldanza said.

“The training is scheduled to begin November 23, 2015,” Baldanza said. “Approximately 300 US soldiers will be a part of the training cadre in western Ukraine, near the border with Poland.”

In July, the US State Department announced that the US Army Europe intended to conduct small unit training for Ukraine’s military personnel to boost its capabilities.

Baldanza explained that US forces would train up to five battalions of Ukraine’s Defense Ministry personnel and one battalion of Special Operations Forces personnel.

“In addition to the training, we will work with the Ukrainian Ministry of Defense on training center, cadre, and institutional level development,” the spokesperson said.

Several NATO members, including Canada, Lithuania, Estonia, and the United Kingdom, will join the United States in the training effort, the Pentagon said.

Since the start of the conflict in eastern Ukraine in 2014, Washington has been providing Kiev with non-lethal military assistance. In April, Washington sent 300 troops to Ukraine to train the country’s National Guard. The conclusion of the training is set for November.

The United States has provided Ukraine with more than $266 million in equipment and training since 2014, according to the Pentagon.

Is the US Training Ukrainian Neo-Nazis?