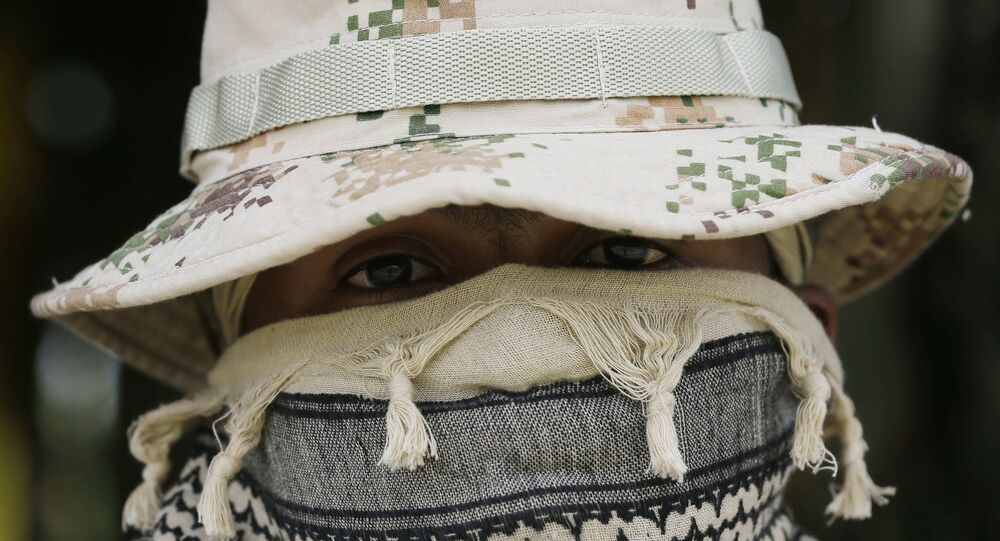 Hundreds of former Colombian soldiers have joined the Saudi-led coalition – not free of charge, of course – and have now taken up frontline positions in Aden, South American media reports.

Colombian hirelings are all set to enter the fighting. They are paid by one of the Saudi-led coalition members – most likely, by Saudi Arabia itself or the United Arab States – recent reports in South American media claim.

© AFP 2020 / Joshua Lott
Colombia to Deploy Up to 5,000 Personnel to UN Peacekeeping Forces – President
Up to 800 Colombian soldiers are taking “frontline positions” in Aden, the southern port city, where Sunni jihadists – mainly ISIL – have recently stepped into the fray with government forces and Saudi-led coalition units that captured this second most important city of Yemen from Shiite Houthi rebels just in August, the Spanish-language channel TeleSUR reported.

Looks like the #Saudi-led coalition doesn't have enough ground troops so they have been hiring mercenaries:800 ex #Colombia-n soldiers hired

According to a Colombian daily El Tiempo report, some 100 Colombians arrived in the country in early October with more soldiers to follow.

The draw is a good salary first of all, but comfortable warfare conditions and modern equipment have also dragged many former military members from Colombia, where they had been enduring decades-long heavy fighting with the FARC armed rebel group, which announced a ceasefire with the government this year.

The #AlSaud told d Sunni world that they are fighting Jihad in #Yemen. 800 Colombian mercenaries will fight for Saudi-led coalition in Yemen

“Despite the heat [in Yemen], it is not the same fight [as in Colombia], because there is unrestricted air support, equipment, and new weapons,” a retired Colombian special forces commander told El Tiempo. “And there is the certainty that if they (the soldiers) do not return, the future of their families is secured.

“We are called mercenaries, traitors, cowards and opportunists. We are nothing like that,” he declared. “We are men who made a decision in response to the lack of [financial] guarantees [at home].”

© CC BY-SA 2.0 / KAZ Vorpal / Predator KAZ
Private Drone Operators to Cause More Civilian Deaths - Activist
The average salary for soldiers of fortune in Yemen is $1,000 per week more than at home, according to a local news outlet Colombia Reports.

Moreover, for serving in Yemen, Colombians have been reportedly promised citizenship in wealthy United Arab States, specifically South Americans being paid directly by the UAE. However, TeleSUR reported that it’s Saudi Arabia which has contracted the hirelings.

Colombia mercenaries to protect Mecca also.. how absurdity of the Saudi regime!!? pic.twitter.com/17xGcAtPd6

One of the possible reasons for recruiting Colombians might be the need to fight against Salafi jihadists, and first of all, ISIL, which is represented by fundamentalist Sunni Muslims, the sect of Islam many – if not most – in the Saudi-led coalition adhere to.

© AFP 2020 / OMAR HAJ KADOUR
Analyst Blames US for Failing to Stop Funding Syrian Mercenaries
Colombian combatants had previously been hired by a secret US-led mercenary army, set up by the founder of the controversial Blackwater private military company, Erik Prince, and acting in the interest of UAE under the command of an actual prince, Abu Dhabi Crown Prince Mohammed bin Zayed al-Nahyan. It was dubbed the Reflex Response force, and was conducting “anti-terrorism operations,” among other activities, the New York Times reported in 2011.

US Private Mercenaries' Use Pose Threat to Democratic Accountability

Analyst Blames US for Failing to Stop Funding Syrian Mercenaries