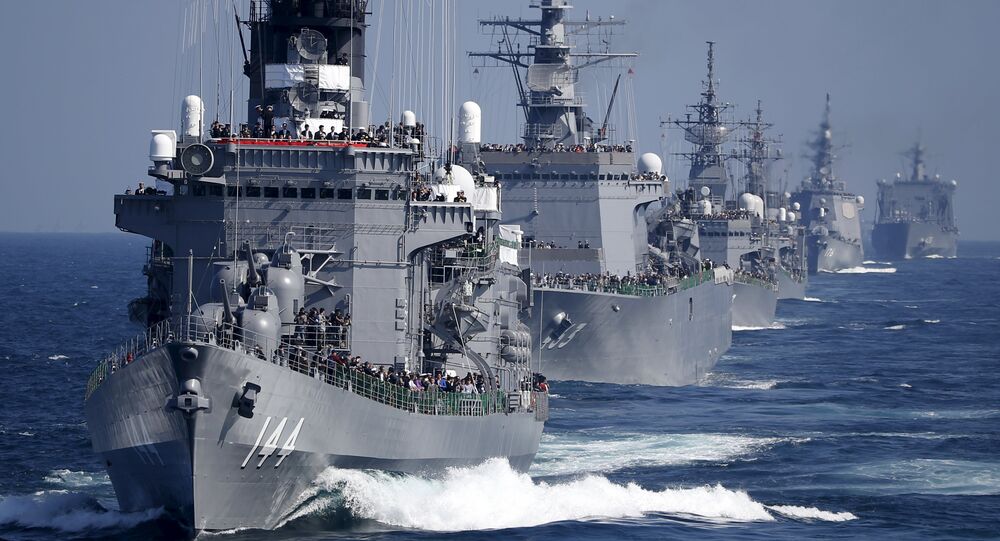 TOKYO (Sputnik) – The JMSDF destroyers and aircraft in Sagami Bay were joined by Australian, French, Indian and US naval assets. A South Korean navy destroyer took part in the review despite a diplomatic rift between Tokyo and Seoul.

"Threats can easily come by crossing borders. A country can no longer protect itself on its own," Japanese Prime Minister Shinzo Abe was quoted as saying by The Wall Street Journal.

© AP Photo / Shizuo Kambayashi
Japanese Prime Minister Urges China to Move on From Wartime Grievances
Tokyo’s relations with Seoul have become strained as the latter seeks an explicit apology for the Japanese colonial military forcing South Korean women into prostitution in the run-up and during World War II.

Abe became the first sitting Japanese leader to climb aboard a US warship, the nuclear-powered Nimitz-class Ronald Reagan aircraft carrier deployed at the US naval base in Yokosuka.

The move was derided at home, while South Korea criticized two Japanese cabinet ministers’ visit to a shrine honoring those who fought and died for Japan, including figures convicted of war crimes. Abe made a ritual offering at the Yasukuni shrine on Saturday.

Last month, the Japanese upper house of parliament voted into law a package of security bills paving way toward military deployment abroad for the first time in decades.

The new legislation, protested by thousands of Japanese citizens, abolishes Article 9 of the Constitution that renounces the use of force in settling international disputes. It allows Japan’s so-called Self-Defense Force to be sent overseas as an aggressor for the first time since World War II.