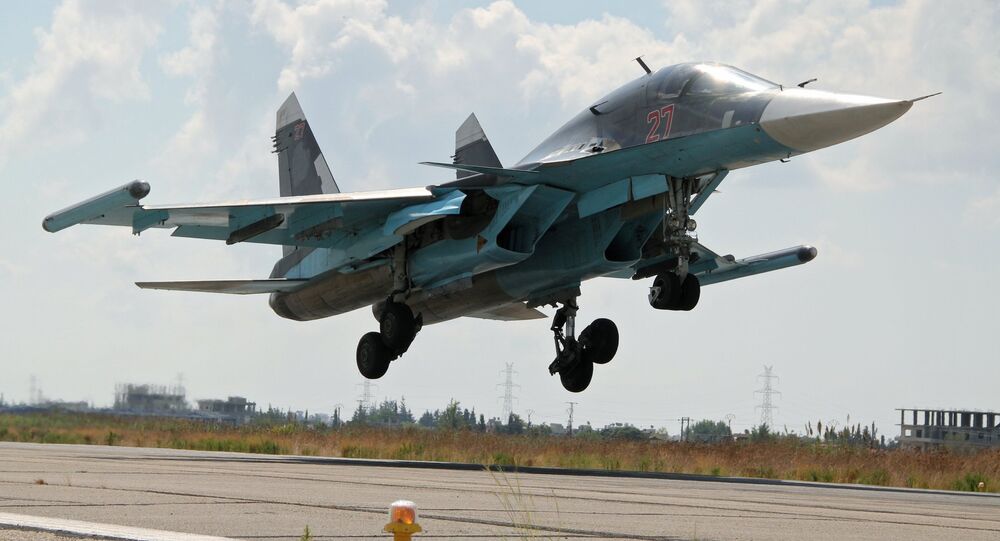 Over the past 24 hours, Russian warplanes completed 33 sorties in Syria, striking ISIL facilities in the provinces of Idlib, Hama, Damascus, Aleppo, and Deir az-Zor, the Russian Defense Ministry said Thursday.

Russia and the United States are moving closer to a possible agreement to provide for the safety of their aircraft over Syria, the Russian Defense Ministry said Thursday.

"Yesterday, another round of negotiations was held on a possible agreement on ensuring the safety of Russian and US-led coalition flights over Syria. We note that our positions are moving closer on key provisions of the future document," ministry spokesman Maj. Gen. Igor Konashenkov told reporters.

"Yesterday, the first stage of exercises on preventing dangerous incidents in the sky above the Syrian Arab Republic began between Russia's Aerospace Forces and the Israeli Air Force," Konashenkov said, adding that the second phase of joint exercises will take place later on Thursday.

The spokesman noted that a mutual information mechanism on flights over Syria has been organized between the Russian control center at Syria's Hmaimim airbase and the Israeli Air Force's command post.

Over the past 24 hours, Russian aviation completed 33 sorties in Syria, striking ISIL facilities in the provinces of Idlib, Hama, Damascus, Aleppo, and Deir az-Zor, he added.

“Near the region of East Ghouta in the Damascus Province, an Su-34 destroyed a camouflaged firing position with an Osa missile complex that was earlier captured by militants from the Syrian Armed Forces,” Konashenkov said.

He said a KAB-500 bomb destroyed the complex that was under a concrete enclosure.

In addition, Su-24M bombers smashed an ISIL command post in Qusair al-Ward in the Aleppo province. The facility was destroyed by a direct hit, he said.

In the province of Hama Russian warplanes destroyed a professionally camouflaged artillery battery, the Defense Ministry spokesman went on to say. According to him, it was detected by Russian military drones.

“The methods the enemy used to deploy its artillery shows that Islamic State has professionals with good military training in its ranks,” Konashenkov said.

According to him, after additional reconnaissance and target localization Su-34 bombers and Su-25 attack aircraft carried out a massive airstrike.

The precision airstrikes took out six pieces of artillery, armament, and four high terrain vehicles equipped with mortars, he added.

According to Konashenkov, Islamic State militants have begun to retreat in Syria, as Russian aviation increases reconnaissance to pinpoint new positions.

"The militants are retreating, trying to establish new positions, and changing underway the course of their existing logistics system for the supply of ammunition, weaponry and equipment," ministry spokesman Maj. Gen Igor Konashenkov told reporters.

© Sputnik / Aleksey Nikolskyi
US Avoids Partnering With Russia Against ISIL, Fears Losing Credibility
Russia is recording these actions through reconnaissance, and then analyzes the information, as well as data obtained through the Baghdad information center, according to the spokesman.

"Of course, in order to verify and confirm this information we have increased the intensity of reconnaissance flights by the air force and by unmanned aerial vehicles," he said.

At the same time, Russian forces have eased the intensity of sorties in Syria over the last day, the spokesman stated. "This is due to the fact that the Syrian army's offensive is transforming the contact line with Islamic State terrorist formations."