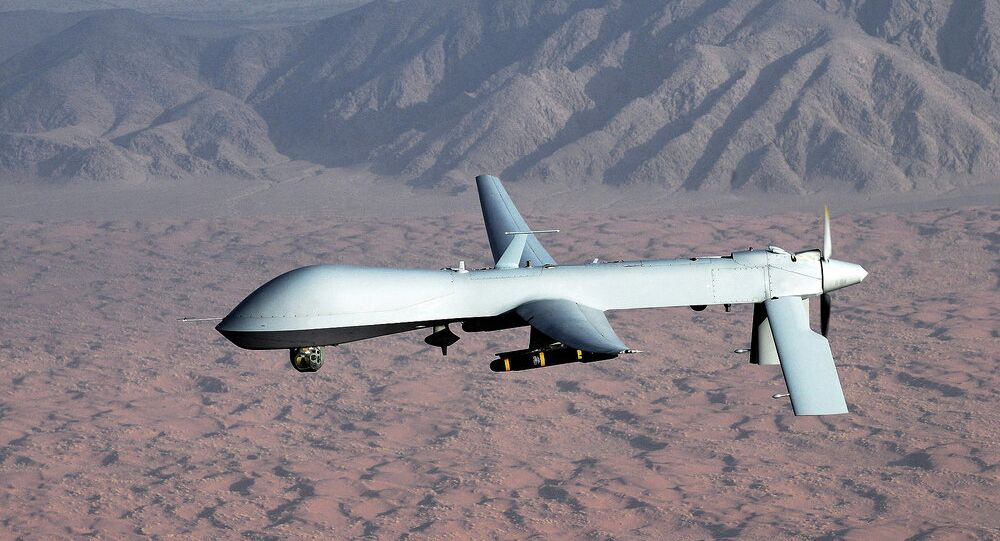 Pentagon spokesperson Michelle Baldanza said that US drones in Syria face no threat from Russian aircraft.

"At no time did the [US-led anti-ISIL] Coalition [in Syria] feel our remotely piloted aircraft were threatened and we expect Russian pilots to act in a responsible, professional manner if they encounter any coalition aircraft. Coalition forces remain focused and committed to our mission to degrade and ultimately destroy ISIL," Baldanza told RIA Novosti on Wednesday.

Earlier in the day, Fox News reported citing anonymous US officials that Russian fighter jets "shadowed" US predator drones on at least three separate occasions since the start of Russia’s air campaign against ISIL radicals in Syria.

© AP Photo / Lefteris Pitarakis
UK Prime Minister Promises to Buy New Drones to Fight ISIL in Iraq, Syria
Russia started carrying out precision airstrikes against ISIL positions in Syria last week, following a request from Syrian President Bashar Assad. All the airstrikes have been carried out based on intelligence collected by Russia and Syria, including during aerial reconnaissance missions.

A US-led international coalition has been targeting ISIL with airstrikes since September 2014, both in Syria and Iraq. Russia has criticized the coalition campaign for being carried out without the approval of the Syrian government or the UN Security Council.

"The Coalition continues to make clear to Russia that we are deeply concerned about any actions taken against moderate Syrian elements," Baldanza told RIA Novosti on Wednesday.

Russia and the United States have agreed to create a communication channel between the countries’ military branches in order to avoid misunderstandings during anti-ISIL operations in Syria.

On Tuesday, the White House said that the United States and Russia will likely hold more military-to-military talks on activities in Syria in the near future.