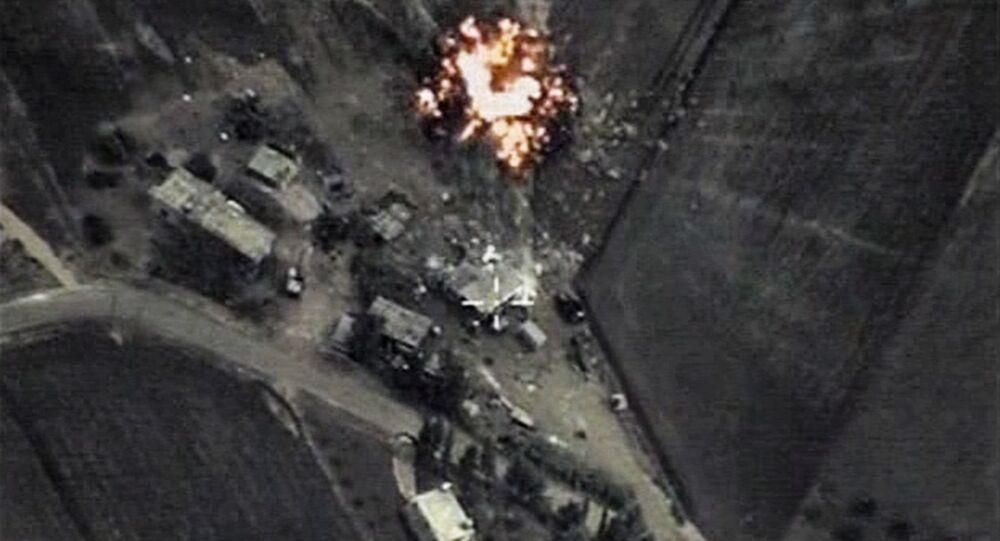 Russia started its air campaign against ISIL in Syria, following a request for assistance from Damascus in the fight against terrorism.

Soon after the first Russian strikes in Syria some media outlets were quick to come up with reports claiming that the Moscow-led campaign already resulted in civilian deaths.

© REUTERS / Khalil Ashawi
Russia's Anti-ISIL Efforts 'Shift Syrian Civil War Landscape'
Meanwhile, the Kremlin refuted the rumours of Russian airstrikes hitting non-terrorist infrastructure in Syria as groundless, emphasizing that there has been no verified information of such activity.

Defense Ministry spokesman Igor Konoshenkov told reporters on Wednesday that Moscow had carried out 20 airstrikes solely against the Islamic State on the first day of its air campaign. He also underlined that the Russian jets did not hit any civilian infrastructure or areas nearby – as was alleged earlier by some media.

Professor Michel Chossudovsky, director of the Canadian Centre for Research on Globalization, spoke to Sputnik in an exclusive interview about how Russia is helping Syria in the fight against the US-supported terror groups in Syria.

“First of all it is important to underline the fact that all these terrorist organizations are supported by US intelligence. In fact the mainstream media now has acknowledged that these rebels are supported by the CIA. The Wall Street Journal says Russian airstrikes in Syria targeted CIA-backed rebels.”

“These rebels are terrorists including the al-Nusra Front. What I think is at stake here is that the Russian air force is now waging targeted attacks directed against al-Nusra in coordination with the Syrian government and what the US is saying is that in a way Russia is going after America’s good-guy terrorists rather than the bad-guy terrorist. They are making a distinction between ISIL and other terrorist organizations, all of which are covertly supported by the US,” Chossudovsky told Sputnik.

He went on to say that Russia is targeting the foot soldiers of the western military alliance, “Basically the mercenaries that have been recruited right from the beginning by NATO, the Turkish High Command with the complicity of Saudi Arabia, Jordan and Israel.”

Chossudovsky reminded that in early 2012 Washington categorized al-Nusra as a terrorist organization but now it is supporting al-Nusra front officially.

“Western media is contradicting itself but it is also acknowledging candidly that the CIA is supporting the al-Qaeda affiliated groups inside Syria.”

© Sputnik / Vitaliy Ankov
Russian Military Fully Coordinating Activity With Syrian Army - Damascus
Talking about the Russian airstrikes in Syria, the expert said, “It is ironic that the United States and its allies including Britain, France and Canada have been bombing Syria and Iraq for over a year and we are talking about several thousand strikes and there is ample evidence, not from Western media, that these strikes were not directed towards the terrorist targets but were directed towards civilian infrastructure.”

He said that Russia is involved in a very precise bombing exercise rather than carpet bombing the country as United States has done, the media is now accusing them of targeting civilians. It is a double discourse with no proof of it.

Chussudovsky added that the US has been bombing Syria without the authority of the sovereign government and in violation of international law.