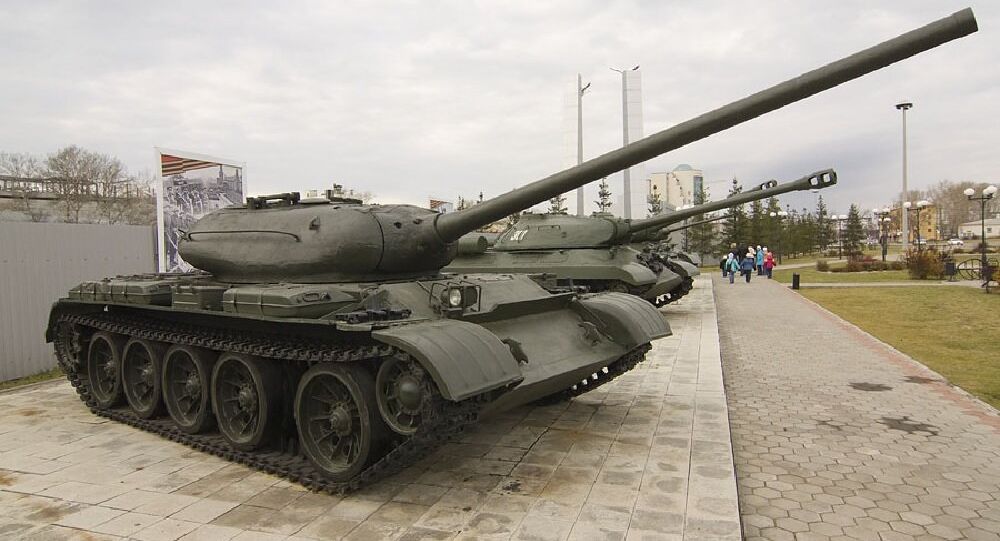 Like the AK-47 but for tanks, Russian T-54 and T-55s are true ‘people’s tanks,’ as the tanks are simple to operate and maintain. They are also cheap, uncomplicated and deadly enough for most 21st century wars.

Introduced in 1954, the T-54A model from the progenitor (T-54-1 and T-54-2 and T-54-3) was produced in small quantities and could be differentiated by a vertical stabilizer for the main gun and a miniature tower.

While the T-34 series had performed exceptionally in the war against Nazi Germany, the Soviets considered its leaf spring suspension and 85 millimeter gun to be out-of-date.

© Sputnik / Alexei Malgavko
New Russian Tanks to Be Able to Fire in ‘Silent Monitoring’ Mode
The T-54 took some damage, but easily destroyed the lighter US-made vehicles. After the shooting stopped, the NVA crew calmly exited their T-54 and walked away, American magazine The National Interest reported.

But there was one weakness of the T-54. “The hostile turret conditions reduced the T-54’s practical rate of fire to just four rounds a minute. A competent Western tank crew could shoot off the same number of shells in the first 15 seconds of an engagement.”

Soviet designers soon afterward started working on the T-55. It looked almost no different from the other tanks but the inside showed a large number of improvements.

“The T-55’s PAZ overpressure system helped seal tankers inside and could keep out radioactive dust from a nuclear strike. The Soviets fixed in another nine rounds for the main gun, as well. In 1961, the further upgraded T-55A received anti-radiation lining, an air filtration system to clean out the chemical and biological agents and it also had a hull-mounted machine gun,” The National Interest reported.

As noted the publication, the T-55’s major selling points continue to be simplicity and availability. Factories in the USSR constructed an estimated 50,000 vehicles, and that’s only an estimate. Poland and Czechoslovakia assembled thousands more locally. Chinese Type-59 clones only add to the count.

Russia has also produced advanced T-55M and T-55AM tanks integrating BDD composite armored “eye brows” on the front of the “turret and spaced laminate plates to the glacis. The vehicles’ features include updated laser range finders, ballistic computers and sights.”

The T-54/55’s tanks, despite the shortcomings, promise to remain popular for many decades to come. The design’s adaptability and a steady market for improvements contribute to its longevity.

Back on the Scene: Russia Brings Tanks Back in Fashion