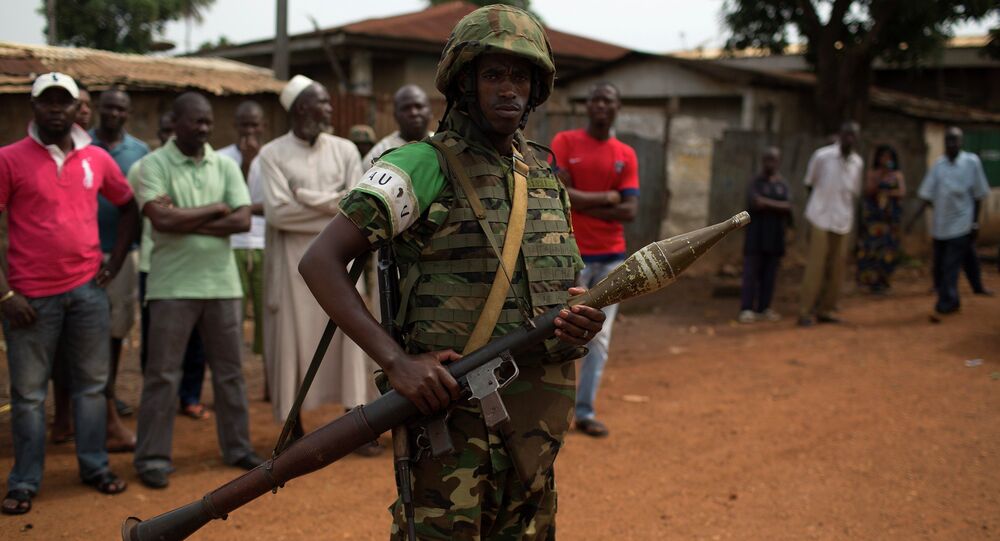 Eric Draitser, an independent geopolitical analyst based in New York City and the founder of StopImperialism.com, shed some light on Western strategies in Africa attempting to trace how the volatile conflicts in the continent trace back to the US and NATO’s regional and global hegemonic scheme.

Draitser said that over the last decade, America has quietly expanded its military presence throughout Africa in an attempt to counter Chinese and other emerging nations’ influence, while consolidating control over critical strategic resources and trade routes.

© AP Photo / Evan Vucci
Obama's African Policy Flaws: China Steadily Outpacing US in Africa
“China was investing the money that it had made from its manufacturing in Africa. As the continent is rich in natural resources it was a wealthy foreign investment for China. When China started expanding its relations with African countries the US, Britain and France saw it as a major threat.”

The United States, like its allies Britain and France, has long maintained influence and indirect control in Africa via financial institutions such as the World Bank, International Monetary Fund, and African Development Bank.

It has exerted political influence using aid organizations such as USAID and NGOs like the National Endowment for Democracy, Freedom House and others.

“But when these countries saw rising China’s power in the continent they realized that they had to keep a check on Africa and do so militarily. In 2007, the US formed the African command which is known as the AFRICOM, which has grown in the last eight years. It was at first presented as an auxiliary force, for their self-defense in terms of policing, law enforcement etc., however, their actual goal was to secure western investments specifically the extraction of natural resources and to present a counterweight to China,” explained Draitser.

“AFRICOM had insinuated itself into every African country one way or another,” Draitser noted.

The analyst explains that the US has its military presence in all African countries except for Zimbabwe and Ituraea. It doesn’t necessarily mean putting boots on the ground but what it actually means, is that there are military advisers, many of whom embed themselves into the bureaucracies; they develop working relations with colonels, lieutenants and generals in all these countries.

“When the US wants to exert influence in a country such as Mali, Ghana or Ethiopia they are able to lean on these contacts that they have established, in the military, logistics, business and so on and influence these advisers in order to capitalize on these countries.”

The US military leadership made their agenda quite clear from the very outset of AFRICOM: provide a military presence to ensure the continued exploitation of Africa for the enrichment of financial capital, and the maintenance and expansion of US hegemony on the continent.