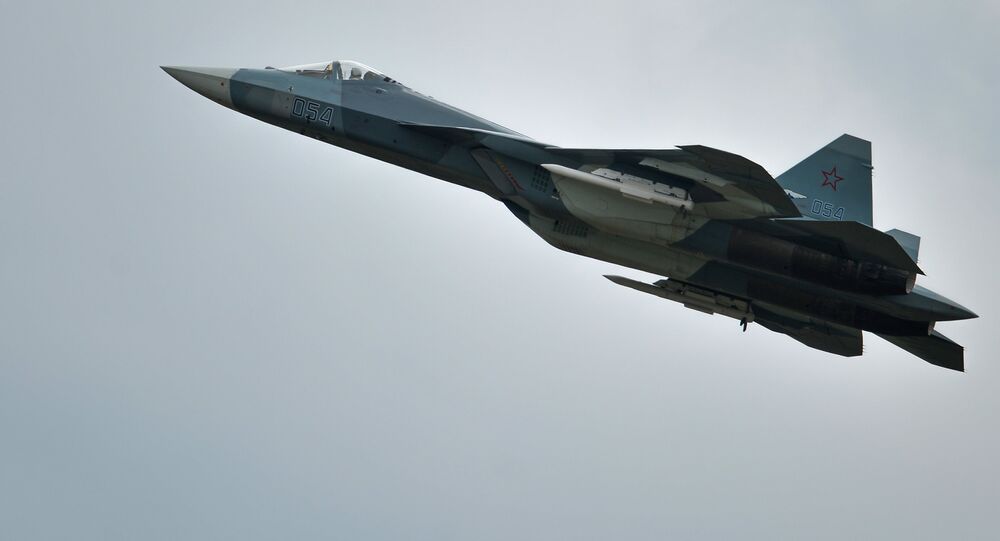 Who would be victorious in an epic battle between Russia's first next-generation fighter jet, the Sukhoi PAK FA, and the US-built Lockheed Martin F-22 Raptor?

It's a tough call since both fifth-generation aircraft have so much in common.

"Everything about the PAK-FA suggests that it is similar in concept to the Raptor – being optimized as a fast, high flying and stealthy air superiority fighter," defense analyst Dave Majumdar noted.

© Sputnik / Grigoriy Sisoev
T-50 PAK FA and Co: Deadliest Russian Aircraft at Their Best
10
Majumdar maintains that both stealthy, single-seat, twin-engine multirole jet fighters are also quite comparable in terms of kinematics, particularly once the T-50 is fitted with new engines.

They differ greatly when it comes to stealth and the comparison is not in the T-50's favor.

"The T-50's design places far less emphasis on all-aspect low observables. Instead, it focuses on frontal aspect stealth – thus it has a so-called 'Pac-Man' signature whereas the F-22's signature looks more like a spider if one were to look at it from a God's eye view," the expert asserted.

It is hard to say at the moment whether stealth will be a game changer in the aerial battles of the future but the Sukhoi PAK FA has other aces up its sleeve.

"While the F-22 might be holding a better hand when it comes to stealth, the Russians have the edge in maneuverability. The T-50 is equipped with three-dimensional thrust vectoring and all indications seem to point to the PAK-FA having an edge in terms of agility," Majumdar noted in an opinione piece for the National Interest.

The bottom line is that both cutting-edge aircraft have advantages over each other and could come out victorious. Much will depend on the battle specifics than anything else.

"All things being equal, if stealth turns out to be everything it's cracked up to be against a peer-level threat, the PAK-FA could be at a distinctive disadvantage. If the US Air Force's faith in stealth proves to be a fallacy, the PAK-FA holds the edge," the expert concluded.

The Raptor has been in service since late 2005. The T-50 is in the flight testing stage and is expected to be commissioned in late 2016.