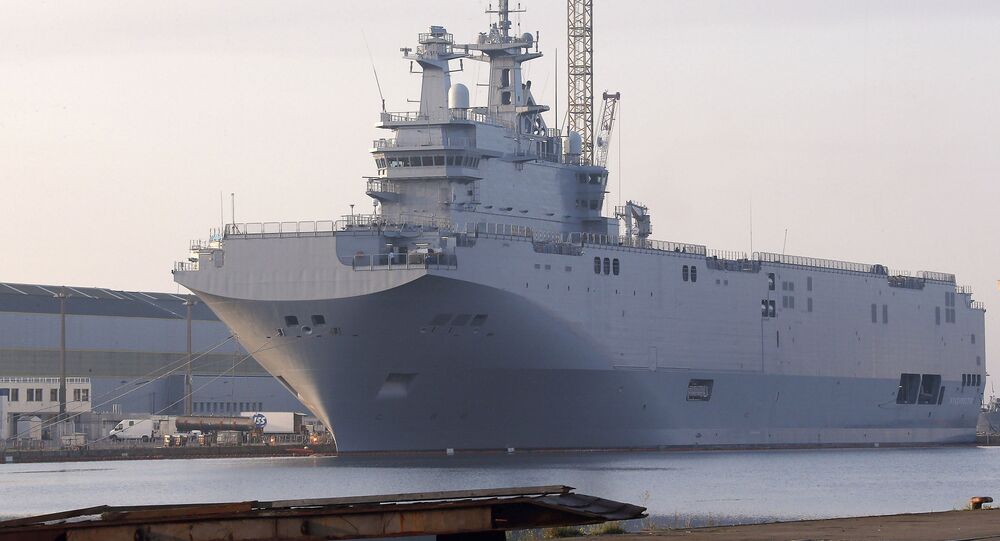 Guess Where One of Mistrals Built for Russia Was Allegedly Spotted?

One of the two Mistral-class amphibious ships initially built for Russia by the French set sail from the port of Saint-Nazaire, and now is in the Bay of Biscay, according to data from AIS Marine Traffic.

Russian Helicopters
Special Offer: Russia Could Sell Mistral-Designed Helicopters to Potential Mistral Buyer
The ship has been docked in Saint-Nazaire over the past several months.

According to the data, the vessel still identified as "Vladivostok" by AIS, reached the Bay of Biscay sometime in the last 24 hours and now is off the coast of Concarneau.

The other ship, "Sevastopol", is still stationed in Saint-Nazaire.

In turn, DCNS, the French naval defense company which built the ships, denied the allegations.

"It is untrue. Both ships remain in place, they have not left Saint-Nazaire," a DCNS naval defense company spokesperson told RIA Novosti.

The two Mistral-class helicopter-carriers were due to be handed over to Russia. However, in November 2014, France suspended the contract, citing Moscow's alleged participation in the Ukrainian conflict.

The sides officially terminated the contract in August. France promised to reimburse Russia the entire sum it had paid for the ships.

According to the French National Assembly, Paris paid Moscow full compensation to the tune of €950 million for the termination of the deal.

After the Russian equipment is removed from the ships, France will be able to take charge of both vessels and sell them to a new buyer.

As of now, Egypt, Saudi Arabia, India and Malaysia have expressed interest in buying the Mistrals.

Recently, the Russian newspaper Kommersant reported that Russia may veto the deal if the new buyer refuses to purchase the Ka-52K attack helicopters specially designed to be used on the carriers.