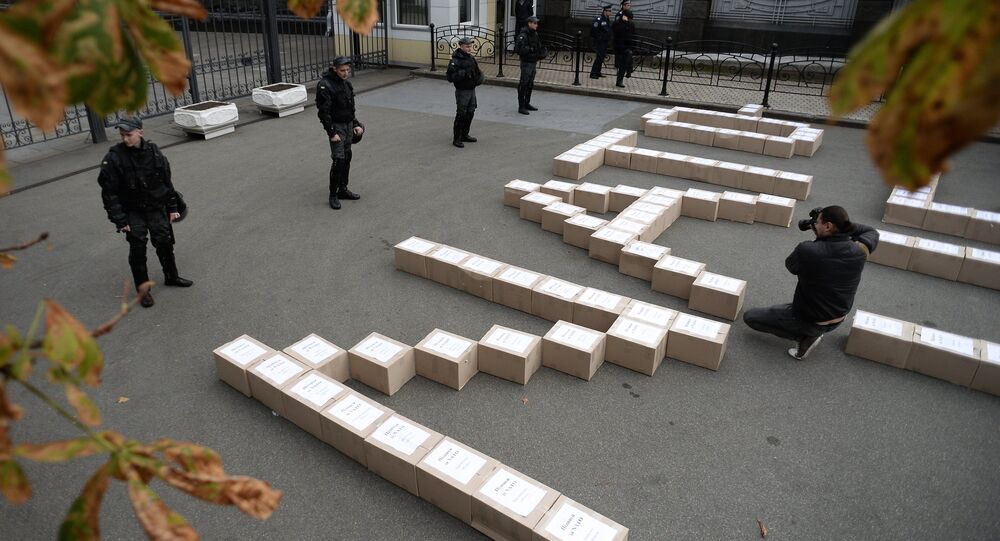 For the first time in history, the NATO Secretary General will participate in a meeting of the National Security and Defense Council of Ukraine during his official visit to the country.

© AFP 2021 / DANIEL MIHAILESCU
NATO 'Clearly Lost Its Mind': Why Does Bloc Need New Command Centers on Russia's Doorstep?
A number of documents on the broadening of NATO presence in Ukraine will be signed within the framework of Jens Stoltenberg’s visit to Kiev, where he is expected to take part in the meeting of the country’s Security Council, agency Ukrinform reported, citing the statement of Ukraine’s Foreign Minister Pavlo Klimkin.

According to earlier reports, the opening of the very first NATO office in Ukraine is being planned.

“Ukrainian Foreign Minister informed that agreements will be made on the NATO presence widening in Ukraine,” Ukrinform reported.

The agency, though, hasn’t specified what kind of agreements they will be.

Pavlo Klimkin, who met Stoltenberg in Brussels on Monday, noted that Secretary General would take part at the Ukrainian Security Council for the first time ever.

“I’ve just had a substantive meeting with the NATO Secretary General and we’ve discussed his visit to Ukraine, which promises to be a milestone. The Chief of Alliance will attend the official opening ceremony of the civil defense military exercise along with the Ukrainian President. In addition, Stoltenberg will participate in Ukraine’s Security Council,” Unian cited Ukraine’s FM as saying.

Ukraine’s Foreign Minister later clarified that Kiev aims to sign an agreement with the agency on opening a NATO office in the country.

“Together with the General Secretary we are planning to sign a document that would mark a new level of representation of NATO [in Ukraine]. Practically, it will be an agency consulate in Ukraine,” Klimkin wrote on Twitter.

In December, 2014, Verkhovna Rada implemented amendments for two laws, rejecting the status of Ukraine as a non-bloc state.

© AFP 2021 / SERGEY BOBOK
'March on Moscow' Among Kiev’s Scenarios to End Donbass War
President Petro Poroshenko claimed that Ukraine would bring its military in compliance with NATO requirements by 2020. But, as many experts say, the country won’t be capable of joining the alliance for at least another 20 years.

Former NATO chief Anders Fogh Rasmussen claimed that before joining the alliance, Ukraine must meet essential criteria for participation, and that would take a lot of time to achieve.

Moreover, NATO doesn’t accept countries in territory disputes, and Ukraine has laid claims on Crimea, an area that reunited with Russia in March, 2014 after the referendum on the peninsula.