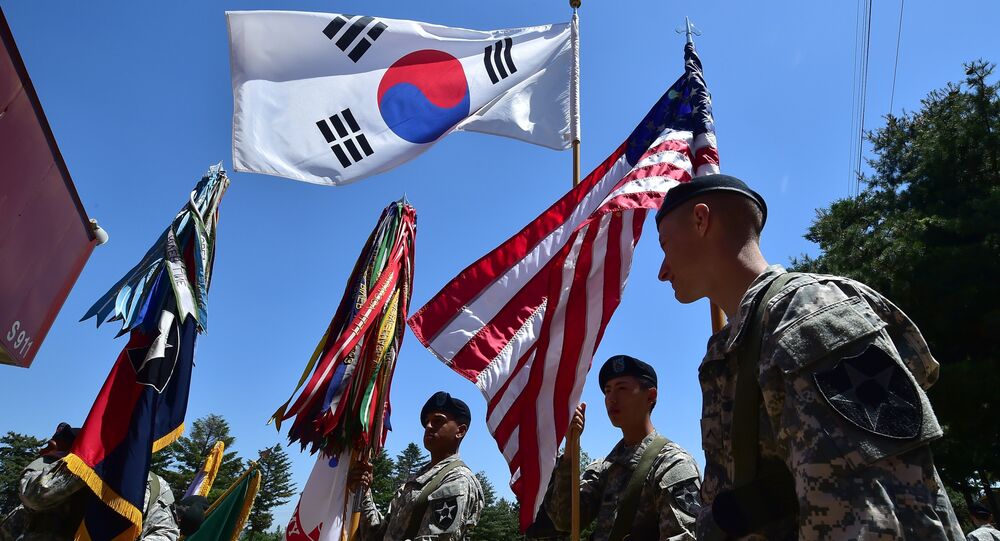 The US seems to be reaping the fruits of its military deployment all over the world: while Washington “pays an exorbitant price to project power far from the US”, global realities have already changed. Washington should also change its approach to the world and give the countries a chance to defend themselves”, says the US media.

One of Washington's highly respected foreign affairs analysts questions why the country is stepping up to defend South Korea at the first signs of a military conflict with its Northern neighbor.

© AFP 2020 / FILIPPO MONTEFORTE
Asia Peace Needs Uncle Sam to Go Home
It’s not because Seoul is incapable of defending itself, Doug Bandow writes in his article in The National Interst magazine.

Washington should "change its approach to the world and give the countries a chance to defend themselves.”

“The South enjoys a population edge of two-to-one and an economic advantage upwards of forty-to-one,” yjr article reckons, comparing Seoul and Pyongyang.

“Seoul has stolen away the North’s chief military allies, China and Russia, which would no longer fight for the DPRK (Democratic People’s Republic of Korea). On every measure of national power, save military, South Korea dominates,” it explains.

And yet, Seoul has “even surrendered control of its armed forces to the United States. Wartime operational control, or OPCON, goes to the American military. Decades have gone by, but the South Koreans say they still aren’t ready to manage their own troops. Some officials candidly admit that they fear taking control might encourage Washington to bring home its forces.”

“Military spending is the price of a nation’s foreign policy. The more defense commitments the US makes, the larger the armed forces it must raise and deploy.”

The principal burden is not the cost of basing troops in the South, for which Seoul helps pay, the article explains, but the expense of creating the units, hiring the service members and buying the weapons.

Such dependence has become a “strategy to ensure a continued place on America’s defense dole”.

While its' military defense spending is being covered by the US, “Seoul takes the money saved and invests it in export-oriented industries, education and other domestic programs, and even prestige military assets, such as a blue-water navy designed for use well beyond the Korean peninsula."

The reason Washington accounts for more than 40 percent of the globe’s military spending is that Americans must pay an exorbitant price to project power far from the United States, even when they have no vital interests at stake.

© REUTERS / Damir Sagolj
'Great Drama' for US and Japan: China's Rise Threatens Unipolar World Order
However, Seoul won’t even be useful in the event of a war against China, as South Korea won’t let Washington turn it into a battlefield; it will have to live with Beijing long after America goes home.

The present-day global realities have changed long ago, and Washington’s foreign policy and its approach to the world should do the same, reflecting those global realities.

South Koreans should be given a chance to defend themselves, without the help of any 'superpower.