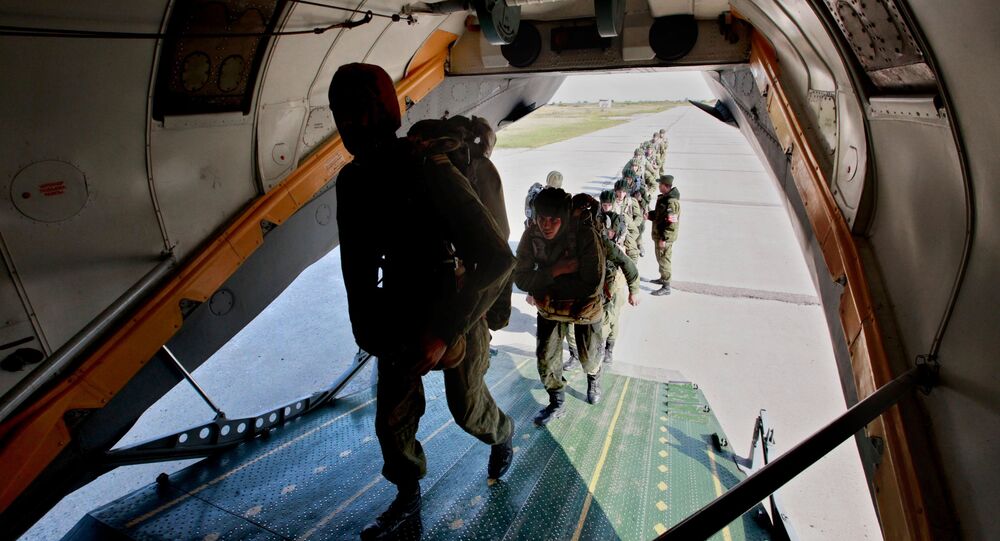 Arriving at a base outside the southwestern Russian Black Sea coast city of Novorossiysk earlier this week, Belarusian and Serbian airborne forces have joined with their Russian counterparts for a training exercise dubbed 'Slavic Brotherhood'. The drills include exercises against a 'Maidan scenario' aimed at destabilizing national governments.

© Sputnik / Igor Zarembo
Slavic Brotherhood: Russia, Belarus, Serbia to Hold Joint War Games
The drills, which began Wednesday and are set to continue until Saturday, feature nearly 700 personnel from the three countries, including a reinforced battalion from Russia's 7th Guards Airborne-Assault (Mountain) Division, two companies of Belarusian special forces troops, and a company-sized detachment from Serbia. The maneuvers include the use of about 20 Russian transport planes and helicopters, along with over 100 vehicles, including 22 Belarussian BTR-80 armored personnel carriers.

The officer noted that a new scenario, developed specifically for this exercise, will feature a simulation of attempts by 'anti-government elements' to destabilize the political situation in a fictional state, including via the use of terrorist attacks.

© Flickr / Dimitrije Ostojic
Russia, Serbia to Carry Out Joint Air Force Drills
The airborne forces' response, according to the scenario, is to conduct an anti-terrorist operation, to restore order and to liquidate the illegal armed formations.

Shamanov emphasized that the exercises would include the use of both lethal and non-lethal force, with non-lethal training including a "special operation aimed at preventing unrest and agitation." The second objective, in the officer's words, will be preparation for and execution of "a special operation aimed at detecting and destroying the training center for illegal armed groups."

Russian military experts commenting on the exercises have speculated that they may presage a new role for the country's airborne forces, with independent newspaper Gazeta.ru suggesting that airborne troops may come to be used as a rapid reaction force in a time of crisis, aimed at preventing a destabilization and civil war scenario of the type witnessed in Ukraine last year.

Alexander Perendzhiev, an expert for the Association of Military Political Scientists, told the newspaper that while the civil policing function in extreme situations is usually reserved for the Internal Troops, airborne forces could play an important role, particularly in preventing casualties. The expert emphasized the airborne forces' professionalism, and recalled their important role in working to stem the consequences of the ethnic conflicts which emerged across the Soviet Union in the late 1980s.

© Sputnik / Kirill Kallinikov
Post-Soviet Military Bloc’s Drills are Long Planned, Not Response to NATO Exercises
Shortly before the exercises began, EU spokesperson Maya Kosyanchich warned Belgrade that Serbia's participation "would send the wrong signal," adding that "we expect that Serbia will act in accordance with the requirements it has taken upon itself in its bid to become a member of the EU." The country's Foreign Ministry responded by noting that Belgrade was pursuing a balanced policy in its military cooperation initiatives, adding that it was open to cooperation with all countries.

Serbia's company-sized detachment was delivered to southern Russia by a Russian military Il-76, with the Russian side providing troops with the supplies, communications equipment and armaments used in the training operation. Once the exercises conclude, the Russian military has taken it upon themselves to get the Serbs home.