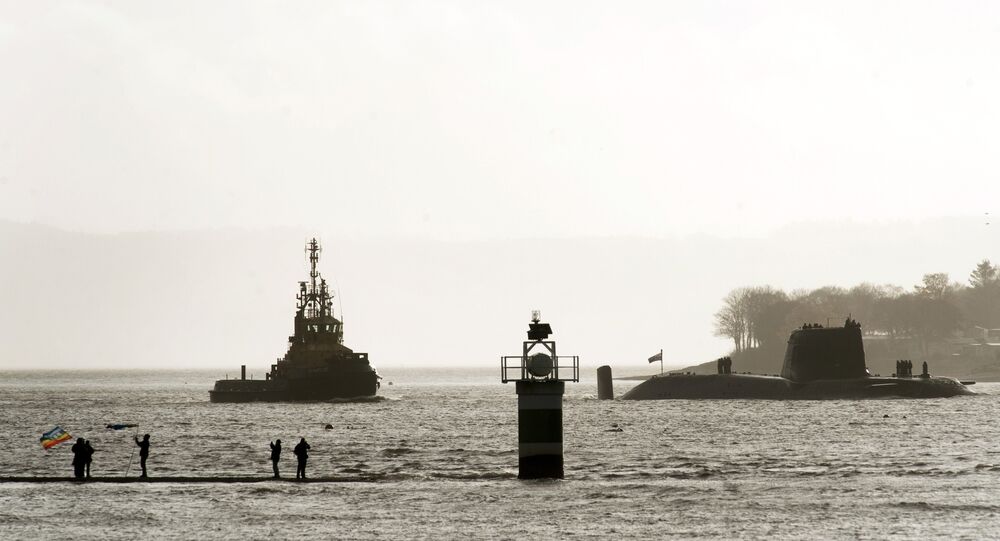 Earlier on Monday, UK Chancellor of the Exchequer George Osborne announced that the new funds for the home to the UK's Trident nuclear deterrent would be used for infrastructure projects and would contribute to job creation.

MOSCOW (Sputnik), Anastasia Levchenko — UK finance minister’s pledge to allocate some 500 million pounds ($770 million) to fund Faslane Trident submarine base is the first step to the renewal of the country’s nuclear arsenal, the head of Scotland's Campaign for Nuclear Disarmament (CND) told Sputnik on Monday.

"Although it was presented as creating more jobs, basically it is spending money on a commitment to replace and renew the nuclear weapons system," John Ainslie, the coordinator of the Scottish CND, said.

© AFP 2020 / Andy Buchanan
London Commits $770Mln to Funding Faslane Nuclear Submarine Base
The final decision on the issue of replacing Tridents is expected to be taken in the British parliament in 2016. Conservatives, who won the general election in May, advocate preserving the UK nuclear arsenal and replacing the existing ballistic-missile armed submarines with a new class.

"Officially, the decision is not to be made until 2016, but this is definitely going ahead and taking the step before the final decision is due to be made," Ainslie said.

Job creation is just a pretext for building ground for Trident replacement, Ainslie added, saying that there are better ways of spending $770 million on job creation.

"It is not just a waste of money, it is spending money on indiscriminate weapons of mass destruction. No modern society should have nuclear weapons," Ainslie said.

The upgrading of the aging Trident system was a hotly-discussed topic in the run-up to the May 7 UK general elections. The Scottish National Party aims at scrapping Tridents, and the Labour party has been divided on the issue. Conservatives pledged to meet the NATO defense spending requirement of at least 2 percent of annual GDP and seek nuclear submarines’ renewal.

Even if the Scottish National Party (SNP) and Labour unite against the Conservatives’ plans of Trident replacement, they are unlikely to prevent the renewal of the country’s nuclear arsenal, John Ainslie said.

"There is certainly a growing momentum of people being opposed to it [the renewal of nuclear arsenal]. But the Conservatives now have the majority, although a narrow one, and even with Jeremy Corbyn as a new leader [of the Labour party], it is likely that a fair number of Labour MPs [Members of Parliament] will still vote for Trident."

The real opportunity to scrap Trident goes along with the new independence referendum for Scotland, Ainslie added.