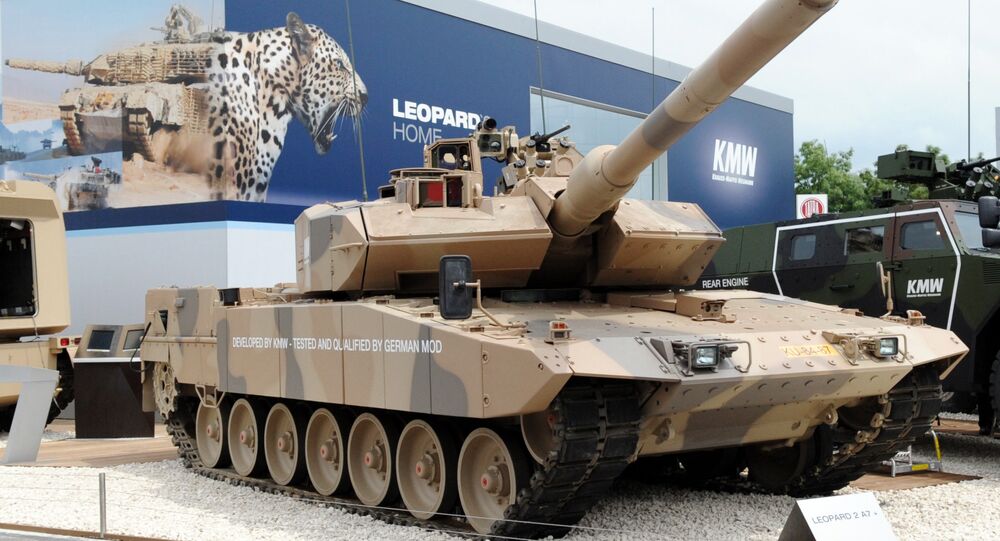 New Leopard #tank by #Rheinmetall based from the MBT Revolution #Germany #sensors pic.twitter.com/EHYxxPUCLI

Unlike Armata, MBT Revolution manufactured by Rheinmetall is not a new platform but an update to the Leopard 2A4 main battle tank. The comprehensive modular upgrade package offers improved protection, an upgraded digital fire control system and increased firepower.

© Sputnik / Host photo agency
Russia to Become Trendsetter in Tank Warfare With New Armata Platform
Earlier this year, Germany's defense agency announced its plans to increase the number of battle tanks in the Bundeswehr's arsenal from 225 to 328.

Germany is trying to "make the best use of the not so modern Leopard 2," but it is also investing into novel solutions, the newspaper noted. The ministry has launched a research into the possible replacement of the Leopard 2, which is expected to remain in service until 2030. Germany's parliament has already secured funding for the initiative.

The recent developments were sparked by Russia's high-tech Armata, the fifth generation main battle tank. The unique piece of military equipment was unveiled during the 2015 Moscow Victory Day Parade. According to Rossiyskaya Gazeta, the T-14 is far ahead of any tank NATO has to offer and could well become world's first unmanned tank.

At the moment Germany has decided to upgrade over a hundred Leopard 2's with the MBT Revolution kit while the new yet-to-be-designed main battle tank is expected to enter mass production in 2030 at the earliest.

Production Testing of Russia's Armata Tank to End in 2016