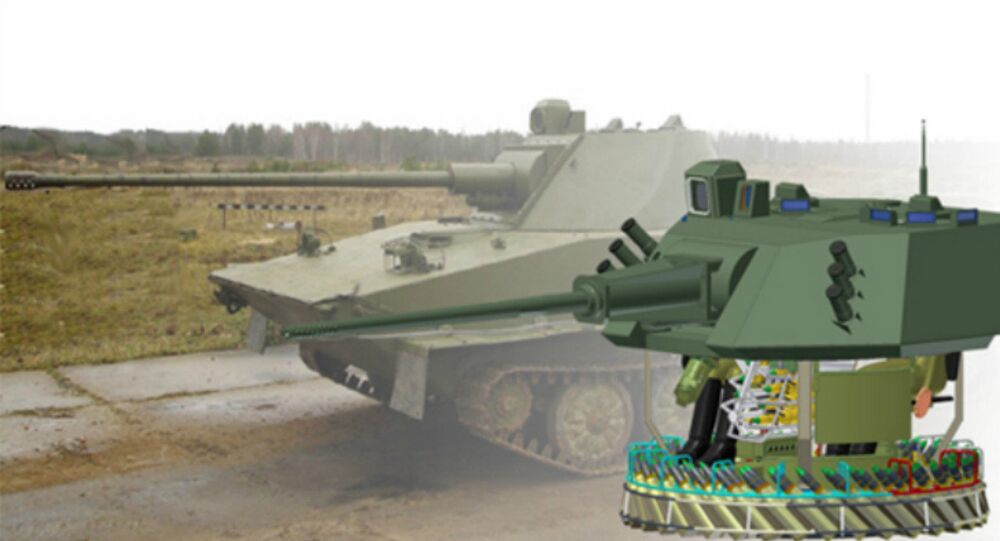 Discussing the tremendous combat potential for the new AU-220M 57 mm automatic gun, experts speaking for Russian Ministry of Defense television network Zvezda have described the new weapon as being one of the best initiatives to be implemented by the Russian military in over a decade.

© Sputnik / Mikhail Fomichev
Russia Developing Deadly New One-of-a-Kind Gun for Army
The channel recalled that in Russia, the idea of large-caliber guns for use by armor and artillery first emerged at the very outset of the Great Patriotic War, with Soviet engineers demonstrating the potential of the then-unprecedented 57 mm anti-tank gun, the 52-P-271, in the difficult first months of the war, in 1941.

The revolutionary weapon was initially considered to be so powerful that engineers could not find a worthy target capable of withstanding the round's blow. A shot from the gun was enough to paralyze any existing German tank, and the gun was later successfully developed to be mounted on the chassis of the legendary T-34. The new modification, known as the T-34-57, took part in the battle of Moscow, and saw use in the Battle of Kursk, earning positive reviews. The artillery piece took especially well to German Tigers, with production resuming after having been temporarily halted over the guns' 'excessive armor penetration ability'.

The channel recalled that "after the war, the legendary anti-tank guns were forgotten, but recently, the topic of a 57 mm cannon has become popular once again. The development marks the return of a true legend."

Zvezda noted that the 57 mm AU-220M gun, "the recently presented wonder of the Central Research Institute Burevestnik, is nothing short of a modern version of the legendary caliber weapon. Maximally automated, versatile and easy to operate, mounted to a vehicular chassis, the new weapon is poised to come into service in the near future."

According to experts, the AU-220M contains "all the best of existing global artillery technology," with the unique module said to be "one of the best initiatives implemented by the Russian army in the past decade."

Engineer and candidate in technical sciences Viktor Simonov told Zvezda that "the essence of the project lies in the fact that the module, mounted on a wheeled or tracked chassis, will be able to easily suppress and destroy the majority of light and medium-armored targets across all weather conditions."

Simonov explained that "it must be understood that the project to adapt a ship weapon to ground vehicles is a very laborious process, requiring many scientific studies, calculations, tests. And everything is aimed toward one goal: to provide armored vehicles with such firepower that, even if it will not allow them to fight on a par with fully-armored tanks, will, in any case, cause the enemy a maximum of trouble on the battlefield."

© Photo : burevestnik.com
Burevestnik's 57 mm А-220М naval artillery module, from which the AU-220M was effectively reverse engineered.
© Sputnik / Maksim Bogodvid
Russia’s Future Warfare Tactics as Seen by US Media
With a phenomenal rate of fire of 300 rounds per minute, and a guaranteed striking range of up to 12 kilometers, the AU-220M's 57 mm projectile is unlikely to cut through the 1 meter-thick front armor of an Abrams or a Leopard MBT, but even against the heaviest of armor, engineers bet on the hail of high-explosive projectiles knocking out optics, destroying aerials, smashing caterpillar tracks and jamming turrets.

New ammunition under development for the module includes armor-piercing, high-explosive and even guided rounds.

Simonov noted that the new weapon is set to dramatically increase the fighting capacity of Russia's infantry fighting vehicles and armored transports. "If we take for example the 30 mm 2A42 or 2A72 guns, their effectiveness as the main gun on the same BMP [IFV] is several times lower than the same module, mounted on the same vehicle, but only with the 57-mm caliber. Here everything depends on fire characteristics –the rate of fire, and the munition."

The expert glibly explained that while "the 30 mm caliber is a good tool to treat, let's say, a headache, the 57 mm is a real antibiotic, capable of much more serious things. And less rounds are necessary. Three or four shots from this 'ship caliber' weapon would easily replace 20-30 shots from the 30-mm gun."

Experts note that the perspective vehicles to which the AU-220M can be adapted are virtually endless, from the BMP-2 and BMP-3 IFVs, to the BTR 7829 Boomerang and the Kurganets-25, based on the Armata universal combat platform.

Andrei Cherkasov, military engineer and graduate from the Novosibirsk Higher Military Command School, noted that the new cannon will "not be limited to tracked vehicles. This is too promising a development not to be used to the full. I am convinced that the A-220M is not just an artillery module. It is more than that. Right now a lot of attention is being paid to universality –the ability to change the designation of gun modules, based on the nature of the task at hand. This [gun] greatly simplifies the task of equipment selection by forces on the ground. The rotation of reserves will theoretically no longer be necessary after the successful introduction of these systems…And in conditions of combat this is an important time-saving measure."

Zvezda confidently asserted that the AU-220M is sure to serve as a real breakthrough in the development of Russian artillery systems. The channel noted that "the new module, traditionally pared with the traditionally reliable machine gun of the 7.62 mm caliber, has every chance of turning practically any armored vehicle into a real universal soldier, capable of single-handedly solving tasks previously thought unthinkable and impossible."