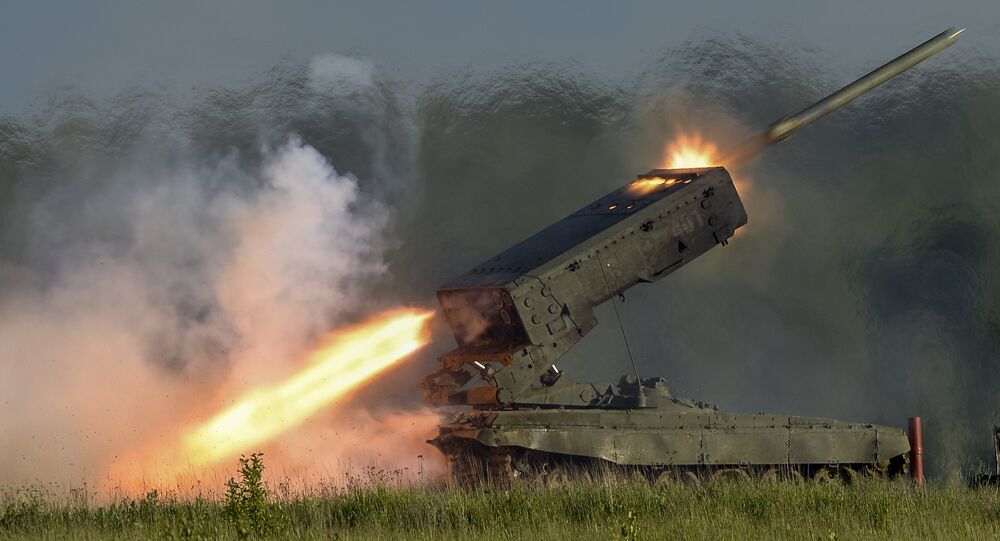 Russia is developing a new generation heavy flame throwing system (TOS in Russian), based on the TOS-1 Buratino system, and new caliber 82 mm mortar shells with an improved range, according to the Director General of Russia’s Tekhmach corporation.

“We have started the development of a new generation heavy flame throwing system under the order of the Defense Ministry. The development, which is currently at its initial stage, should go rather speedily, and we should be able to deliver the new product in a few years,” Director General of Russia’s Tekhmach corporation Vladimnir Tikhonov told RIA Novosti.

© Sputnik / Pavel Lisitsyn
The TOS-1 Buratino multiple rocket launcher during a demonstration at the International Exhibition of Arms, Military Equipment and Ammunition, held in the city of Nizhny Tagil

The new system is from the creators of the TOS-1 Buratino, named after a wooden boy, the protagonist from Tolstoy's re-imagined Pinocchio tale, The Golden Key. The same developer also worked on the modified version of the system, TOS-1A Solntsepyok (which in Russian means the "Blazing Sun").

TOS-1 is a 220mm 30-barrel multiple rocket launcher and thermobaric weapon mounted on a T-72 tank chassis. TOS-1 was designed for overcoming enemy personnel in fortifications, in open country, and in lightly armored vehicles and in transport. First combat tests took place in 1988-1989 in the Panjshir Valley during the Soviet war in Afghanistan.

It consists of a chassis, rotary launch system with 30 tubes for unguided missiles. It has a fire control system with a ballistic computer, aiming site and laser range finder.

Another new development is the new 82 mm caliber mortar shells, which are more powerful and can have a greater range. The testing of the new mines is set to be completed by the year end.

“The development of the new mortar shells is at its final stage. The new shells will have an improved range, power and lethality. They will have new type of gunpowder, propellant bursting charge and detonating fuze. I hope we will complete all the testing by the end of the year,” said Tikhonov.

Iraq Hopes for Russia to Supply Arms, Ammunition to Fight Against ISIL