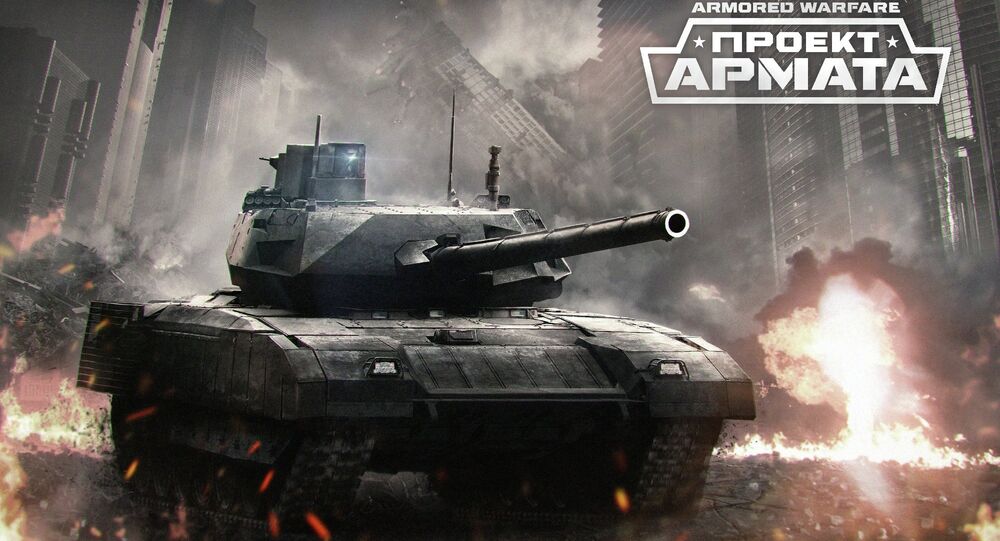 In Russia, a well-known team-based tank game will no longer be called Armored Warfare. Instead, it will be branded as Armored Warfare: Project Armata!

“As the armored vehicles fans well know, the ‘Armata’ tank became the ‘star’ of the military news sites in these last few weeks.  We would like to share excellent news with you – the T-14 ‘Armata’ tank will be featured in Armored Warfare! The developers have confirmed their plans to introduce the new Russian tank into their game.  The ‘Armata’ will be available in the game as one of the high-tier main battle tanks, placed either on tier 9 or on tier 10, both of which will be added as a part of the future game development after its release,” reads a statement on the official website of the game.

In Russia and in Central Asia, the online multiplayer game is operated by the popular email portal Mail.Ru, and it’s run by My.com in North America and Europe.

The statement comes after a deal was agreed to between Mail.Ru and Uralvagonzavod, a well-known producer of armored vehicles, including the Armata.

© Sputnik / Host photo agency
Russia to Become Trendsetter in Tank Warfare With New Armata Platform
The Russian Armored Warfare portal has had content related to Uralvagonzavod before, but the rebranding of Armored Warfare was still a surprise.

Founded in 1936, Uralvagonzavod Company in the city of Nizhny Tagil is one of the premier armor producers in the world, responsible for such legendary tanks as the T-55, T-62, T-72 and T-90 as well as the BMPT Terminator armored fighting vehicle.

From now on, Russian specialists from Uralvagonzavod (UVZ) will cooperate closely with the Armored Warfare developers at Obsidian Entertainment, to ensure the UVZ vehicles are implemented as realistically as possible and provide the developers with accurate vehicle dimensions, parameters and authentic sound files.

Due to this close cooperation, the game has been renamed Armored Warfare: Project Armata in the Russian market. This change, however, hasn’t been implemented in the Western market, which is overseen by My.com.

© Sputnik / Mikhail Voskresensky
Russia's 'Secret Weapon of War' Holds the Key to Armata's Future
“One of the fascinating aspects of Armored Warfare is that as modern military technology continues to evolve this game will grow right along with it,” Project Director at Obsidian Entertainment Richard Taylor, says in the statement.

“Prototypes and cutting edge experiments of today will become the vehicles of tomorrow and we have plans for including the latest and great machines that are actually built in future updates to Armored Warfare.”

The Armata is a Russian prototype of a heavy tracked vehicle platform that will be used as a basis for the construction of a next-generation main battle tank and a range of other combat vehicles.

© Sputnik / Vadim Savitskii
Production Testing of Russia's Armata Tank to End in 2016
The Armata tank's main armament includes a 7.62mm remote-control machine gun and a 125mm smoothbore cannon. The tank is operated by a crew of three, who are housed in an armored capsule at the front.

The tank is also equipped with active counter-mine defenses and a series of circular view, high resolution cameras. It can fire rounds while in motion and travels at a speed of up to 50 miles per hour (approximately 80 kph).