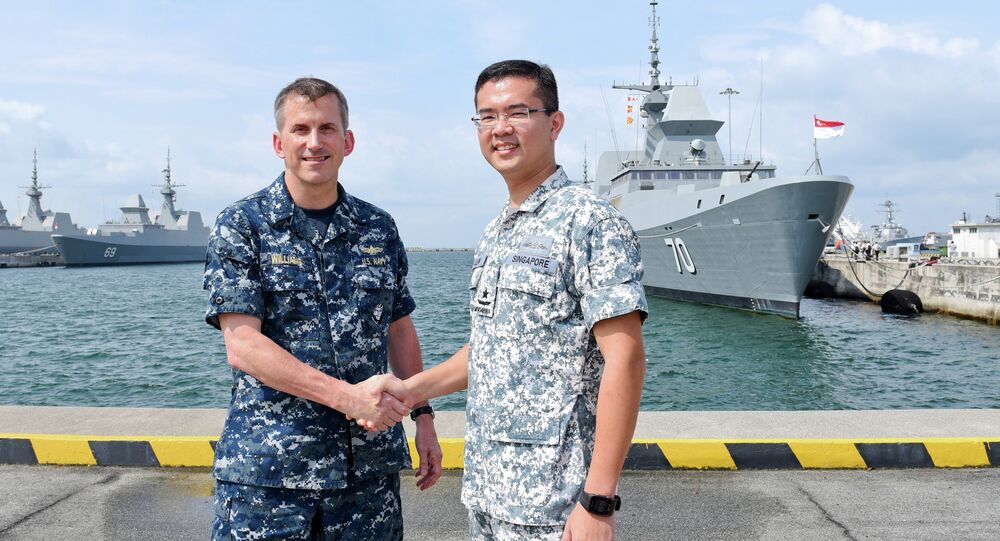 The exercises of the US and Singapore this year included a five-day sea phase involving ships, submarines and aircraft operating together.

“The US Navy and Republic of Singapore Navy completed the 21st annual Cooperation Afloat Readiness and Training (CARAT) Singapore after 11 days of comprehensive training both at sea and ashore, July 24,” the release read.

CARAT consists of a series of annual bilateral military exercises performed by the US Pacific Fleet and the forces of several Association of Southeast Asian Nations member states.

© Flickr / US Naval Forces
US Guided Missile Destroyer Takes Part in Naval Drills in Latvia
The CARAT Singapore exercises this year included a five-day sea phase involving ships, submarines and aircraft operating together, the launching of unmanned aerial vehicles, performing deck landing qualifications with embarked aircraft and conducting replenishments, according to the release.

The US Navy has been conducting CARAT exercises with the Singaporean Navy since 1995. It will conduct additional CARAT drills by November 2015 with the military forces of Bangladesh, Brunei, Cambodia, Indonesia, Malaysia, Thailand and Timor-Leste.

© REUTERS / SOUTHCHINASEA-PHILIPPINES/SUBIC REUTERS/Lorgina Minguito/Files
American Diplomat Denies US Neutrality in South China Sea
In 2012, then US Defense Secretary Leon Panetta announced that the United States will deploy 60 percent of its navy fleet to the Pacific, as part of a new US strategy in Asia.

Panetta said that under the strategy, the United States would deploy aircraft carriers, a majority of its destroyers, cruisers and combat ships and submarines in the region.

Following the announcement, China warned the Unites States of the danger of resorting to militarism, saying it could endanger peace.