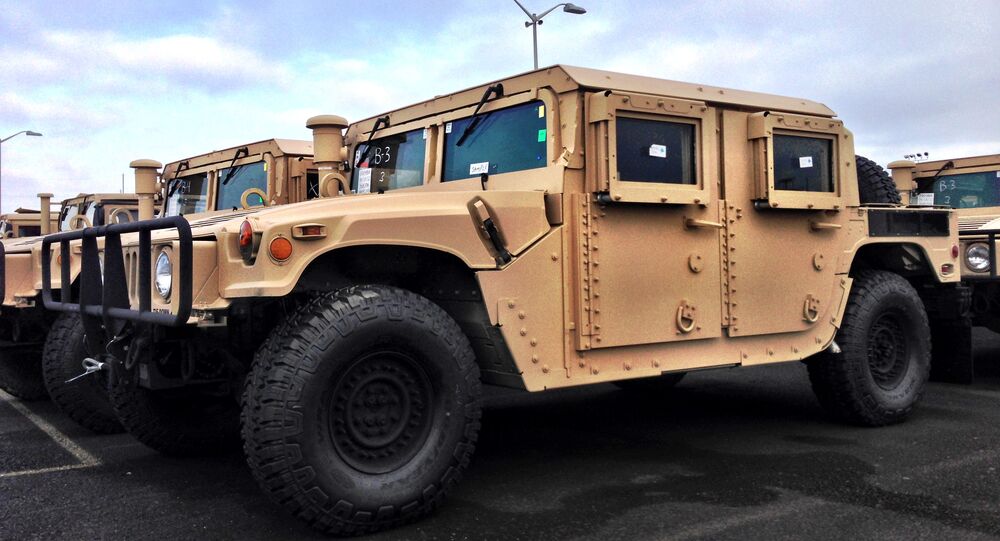 The AM General Company in South Bend, Indiana will build High Mobility Multipurpose Wheeled Vehicles (HMMWV), or Humvees, for use by the Ukrainian Army as part of a giant contract for 2,082 of the vehicles, the US Department of Defense said in a statement.

WASHINGTON (Sputnik) — The contract included options for 2,082 of the vehicles, with spare parts, according to the statement.

The Humvees would be built in Mishawaka, Indiana, with an estimated completion date of April 29, 2016.

© AP Photo / Raqqa Media Center
US Arms Middle East Terrorists to Fight Against Iran – Iranian Official
The Defense Department noted the deal was approved by the US Army Contracting Command.

The new contract came a week after Defense Secretary Ashton Carter pledged to step up military supplies to the Ukrainian government of President Petro Poroshenko which is still fighting its two breakaway secessionist provinces of Donetsk and Lugansk.

© AP Photo
Fighting ISIL: Pentagon Begins New Shipments of Weapons to Iraqi Army Under $1.6B Fund
On March 25, 2015, the United States delivered a first batch of ten Humvees to the Ukrainian military. Reports said the vehicles were flown to Kiev’s Borispol airport aboard a US Air Force military tactical freighter.

US Defense Secretary Ashton Carter has pledged to deliver at least 100 Humvees to Ukraine by the end of this month, liveuamap.com reported on June 25.

The Humvees are being delivered to Ukraine within the framework of non-lethal military aid promised to Poroshenko by the administration of President Barack Obama.

Funding for the aid was including in the 2016 National Defense Appropriations Act, which has been approved by both the US Senate and House of Representatives.

Finland Rules Out Acting as Mediator in Ukraine Talks Between West, Russia

Tags:
US, Ukraine, US Department of Defense (DoD)
Community standardsDiscussion