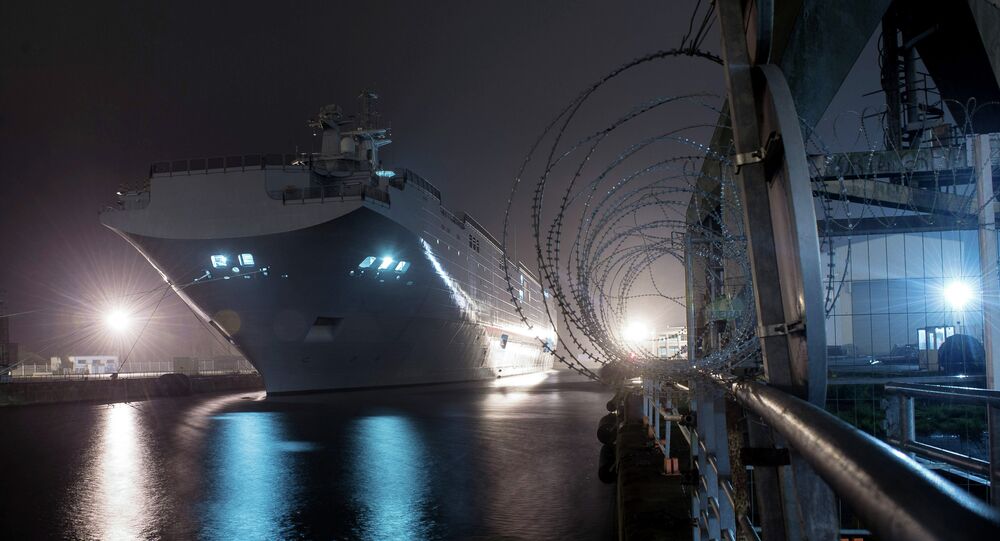 Russia's Krylov State Research Center has decided to use the opportunity of the Seventh International Maritime Defense Show in St. Petersburg to show off its new prospective designs, including the brand-new amphibious assault ship design meant to replace the Mistral.

© Sputnik / Igor Russak
Modular Boats and ‘Krypton’ Missiles Star at Russia's Maritime Defense Show
The Seventh Biannual International Maritime Defense Show (IMDS-2015) kicked off in Russia's 'northern capital' of St. Petersburg on Tuesday, with dozens of Russian designers and builders and over 30 foreign companies participating in the five-day event, showing off new products and carrying out numerous scientific conferences and round tables.

Among them is a new design, so far veiled in secrecy, by the Krylov State Research Center.

Commenting on the impressive new projects, which include everything from aircraft carriers to destroyers, Rossiyskaya Gazeta noted that each of Krylov's prospective ships has already undergone extensive testing in special wave pools. The paper comments on the buzzing of anticipation around one design in particular –Russia's possible answer to the aborted Mistral amphibious assault ship deal.

© Sputnik / Igor Zarembo
It is Even Bigger: Russia's New Helicopter Carrier to Replace Mistrals
For now, the new design remains hidden behind a special cloak at the research institute's booth, to be removed only for distinguished guests with clearance to its as-yet classified details. But some of the new ship's characteristics are already known. Named the Lavina ('Avalanche'), the new design's displacement is about 24,000 tons. It's length: 200 meters. Width: 34 meters. Draught: 7.5 meters. The ship will be capable of carrying up to 50 tanks and other armored vehicles, or up to 500 troops, or up to six auxiliary landing craft, or 16 anti-ship and assault helicopters.

Bigger than the Mistral (which weighs in at 21,300 tons), the Lavina would also be faster, with a maximum speed of 22 knots, compared with the Mistral's 19 knots. The apparently semi-trimaran warship will also have the capability to sail up to 5,000 miles at 18 knots without service calls.

© REUTERS / Stephane Mahe
Russia Reveals Two Different Warships to Replace Mistrals
Russia and France signed a $1.3 billion deal for the delivery of two Mistral-class amphibious assault ships in 2011. Delivery of the ships was put on hold in late 2014 after Paris claimed Russian interference in the Ukrainian crisis and civil war, charges which the Kremlin has repeatedly denied as groundless.

Russian media have reported that DCNS, the French industrial group charged with the construction of the Mistrals, has decided not to attend the show, with rumors circulating that they were pressured not to do so by Elysee Palace.