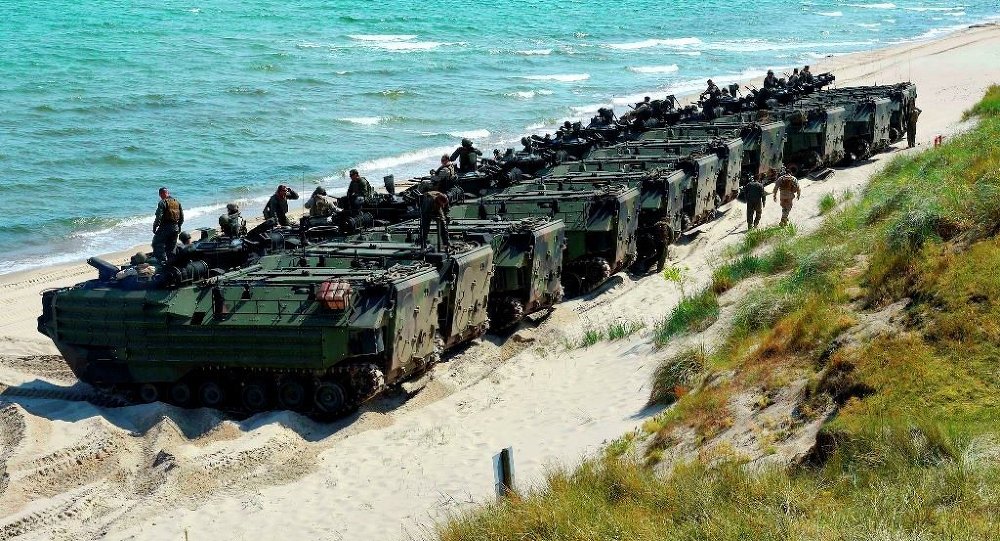 As the war in Ukraine continues, western officials have accused Russia of aggressively interfering and fuelling the conflict. However an announcement that the US will deploy heavy weapons in the Baltic states has highlighted the extent to which the West has built up arms on Russia's doorstep.

Earlier this week US Defense Secretary Ash Carter announced that America would "temporarily" place weapons, armored tanks and artillery in six eastern European countries, including those that border Russia.

American equipment, which includes 250 army tanks, will be placed in the former Soviet republics of Estonia, Latvia and Lithuania, along with Bulgaria, Romania and Poland by early 2016.

And while Carter said the equipment would be used for training and military exercises, the presence of US weaponry in eastern Europe has been viewed by many as a highly provocative step towards Russia, given the current breakdown in relations between Moscow and the West.

Officials in the Baltic states have said that they are increasingly concerned about their national security and what they have described as "Russian aggression" amid accusations Russia has been sending active troops into Ukraine to fight alongside eastern Ukrainian militia groups in Donetsk and Lugansk.

However, Moscow has denied the western accusations of involvement in Ukraine, and has instead pointed to NATO's build-up in eastern Europe, which it views as a threat to Russia's national security.

Officials in the West have also criticized US-led plans to beef up NATO's military presence in eastern Europe, with German lawmaker Andrew Hunko telling the Parliamentary Assembly of the Council of Europe (PACE) that western expansion crosses "the red line" which could further ignite tensions in the region:

"NATO said it would not extend eastwards, that was the plan. The decision taken in the 1990s to extend NATO even further towards the east is one of the bases of this conflict."

Hunko said that NATO's act of encouraging former Soviet countries to join the military alliance was also an aggressive move aimed at Russia.

"Russians said again and again that Ukrainian or Georgian membership in NATO is a red line for them."

The recent developments also follow last year's NATO approval to set up a "rapid response force" of up to 5,000 soldiers to be stationed in eastern Europe.

These actions have led Moscow to react, with President Vladimir Putin announcing that Russia will boost its nuclear weapon base by delivering around 40 new intercontinental ballistic missiles.

The subsequent Russian announcement has sparked fears of a potential new arms race between Russia and the West, with suggestions the relationship is returning to a breakdown similar to one experienced in the Cold War.

Breach of the NATO-Russia Act?

While certainly viewed as a provocative step aimed at Russia, it has also been suggested that the recent build-up of military equipment and stationing of troops in eastern Europe is in breach of the Russia-NATO Act of 1997, aimed to avoid an arms build-up in the region.

Are Scandanavia, the Baltics, Poland, Canada & USA going to be left to stand up to #Russia alone? Looking that way #NATO

The Act pledges that NATO will not permanently station substantial combat forces in Eastern and Central Europe.

And while US officials have denied that they are in breach of the Act, the expansion of NATO forces into former Soviet states has raised questions over what constitutes a 'temporary' and 'permanent' build-up of arms and equipment in eastern Europe.

Along with the stationing of weapons and troops in eastern Europe, other forms of NATO activities have raised eyebrows, including the BALTOPS training exercises, where 50 vessels from 17 countries, including 5,600 troops took part in air and sea exercises in the Baltic Sea earlier this month.

Despite the war games taking place just miles form Russia's coastal enclave of Kaliningrad, NATO's website stressed that the 2015 BALTOPS exercise was not "held in response to any specific threat."

While Russia has been accused of actively sending troops into Ukraine, western countries have openly admitted to sending military forces into the country to assist Kiev's army in the conflict.

British officials announced in February that they would send 75 troops to Ukraine's west as part of a six-month long program aimed at training Ukraine's military "to strengthen the defensive capability of the Ukrainian armed forces and build the resilience that they need."

This was followed by the US announcement that they would conduct training exercises in western Ukraine, where close to 300 American specialists took part in exercises aimed at boosting the skills of up to 780 Ukrainian troops.

This continued build-up of forces in eastern Europe, along with US plans to send $75 million dollars worth of non-lethal military aid to Ukraine, has been criticized by Russia, who say it is not effective in working towards a political solution in Ukraine.

Russian Presidential spokesperson Dmitry Peskov said the move "certainly does not contribute neither to strengthening of trust, nor to de-escalation of tensions in the conflict."