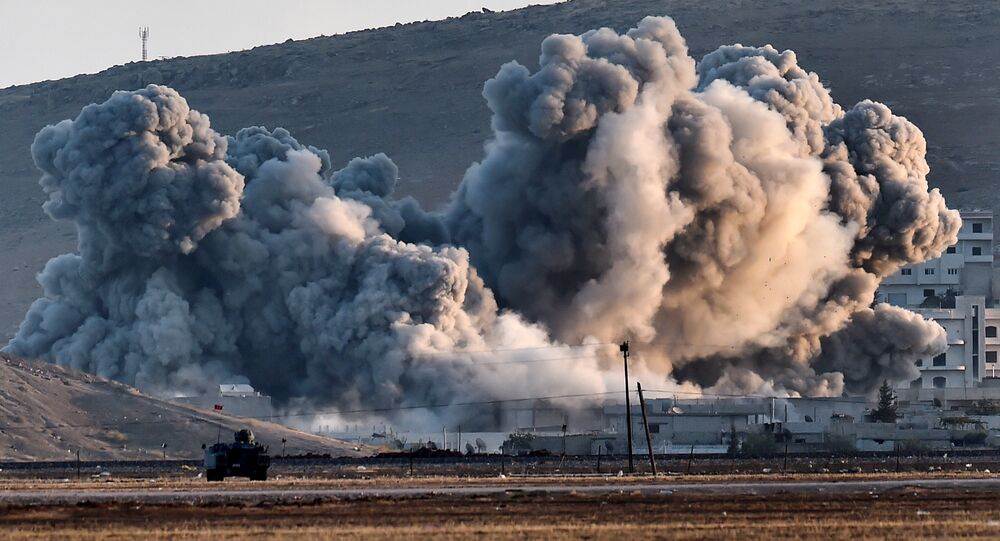 The US-led coalition against Islamic State carried out 17 airstrikes on targets in Iraq and Syria, US Central Command (CENTCOM) said in a statement on Tuesday.

WASHINGTON (Sputnik) — Three airstrikes hit Islamic State positions near the Syrian town of Tal Abyad, where the US-led coalition has been providing support to a coalition of Syrian Kurdish forces of the YPG, Assyrian Christians and the Free Syrian Army group Burkan al-Firat.

On Tuesday, Syrian Kurdish forces announced they took Ain Issa, a key ISIL center of control and site of a military base, only days after they took over Tal Abyad, a major ISIL logistics point on the Turkish border. The capture of Ain Issa puts Syrian Kurdish forces within 30 miles of the Islamic State’s self-declared capital of Raqqa.

© AP Photo / Senior Airman Matthew Bruch, US Air Force
Some 60% of Americans Want US Troops to Fight ISIL in Iraq

“Coalition air power provides a significant advantage for ground forces in hybrid warfare,” Brig. Gen. Thomas Weidley, the chief of staff for the anti-Islamic State coalition, said in the statement. “We see this materializing daily in support of our enabled partners within the battlespace.”

In Iraq, the anti-Islamic State coalition carried out 14 airstrikes across the country destroying fighting positions, weaponry and infrastructure.

The Islamic State remains entrenched in several key areas along the Euphrates valley in Iraq's Anbar province and Mosul as the government in Baghdad struggles to mount sustained offensives against the extremist group.

On Tuesday, the United Nations announced at least 3 million people in Iraq have been displaced by Islamic State fighting and violence.